“Few Are Prepped For A Stock-Market Shock”: As Debt Collapse Nears, Wall Street Has Blinders On

“Pride goeth before destruction, and an haughty spirit before a fall.” – Proverbs 16:18

Fresh stock market highs are giving everyone the holiday season cheer that encourages spending and inspires optimism about the future under the incoming Trump administration.

The market could hit 20,000, and investors are ecstatic… but reality is still looming over the desperately vulnerable economy.

The Federal Reserve has announced that it is raising rates, and there is every indication that things could take a turn for the worse in the near future – particularly as it has been Fed stimulus over the past eight years that has been propping up the stock market.

Now, as the cost of money increases, interest payments are mounting and debts may become unmanageable for some.

But the so-called “fear gauge” on Wall Street, a volatility index, indicates that there is a disconnect with the disturbing systematic problems lying just below the surface, as nearly everyone inside finance is feeding off of short term numbers and a positive news buzz.

As stock-market indexes march to fresh records on the back of a monthlong rally in the wake of Donald Trump’s presidential election win, U.S. investors don’t appear to be daunted by the unrelenting climb to new heights.

At least that is what the low levels of the CBOE Volatility index, known as Wall Street’s fear gauge, is signaling. The metric which allows investors to make bets on implied levels of volatility on the S&P 500 is currently at 11.56, hovering near the lowest level of the year, set Aug 19. In other words, investors aren’t worried that bad things could upend the brisk march higher.

[Randy Frederick, managing director of Trading & Derivatives at Schwab Center for Financial Research] is paying attention to the high levels of complacency the VIX currently indicates. He said it is worrying that nobody is worried right now.

“Hedging against a downside in the market is cheap because nobody is hedging,” Frederick said. “It doesn’t mean it is wrong not to hedge, as there is no good reason to need major downside protection for the next week or two or until after the inauguration.” 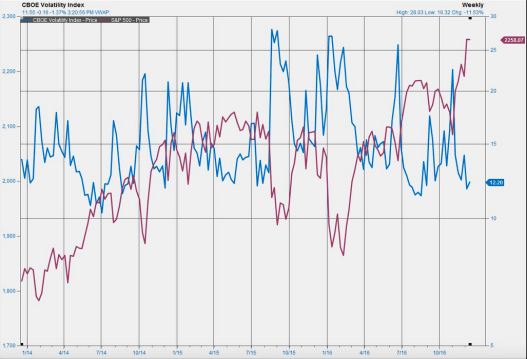 But what happens after the temporary high of the holidays and the presidency begins to fade?

The real problems are lying in wait, and there is likely to be some very real challenges to the ability of ordinary Americans to stay afloat.

Health care costs are skyrocketing in most states, while rent, mortgage, groceries and other expenses continue to pose a serious problem for middle, lower and working class Americans who have seen, overall, a wage freeze for the past many years.

The student debt bubble is also threatening to pop, and there is a significant bubble in auto and housing (once again) as well. How can everyone just pretend that nothing is happening, and that good times are here again?

Those problems could be sharply exacerbated as the huge debt bubble, swelling particularly since 2008, threatens to pop.

As Offgrid Survival explains, the United States is absolutely drowning in debt, and no amount of holiday cheer can shrug that off.

Over the next ten years, experts think that debt could balloon to a staggering $27.3 trillion. While that might seem like an insurmountable amount of debt to recover from, the fact is, we have already surpassed that number.

When factoring in unfunded liabilities like Social Security, Medicare, government pension plans and Obamacare, the true debt number is actually much higher than $27.3 trillion. Estimates put the real number somewhere between $205 trillion to $222 trillion. 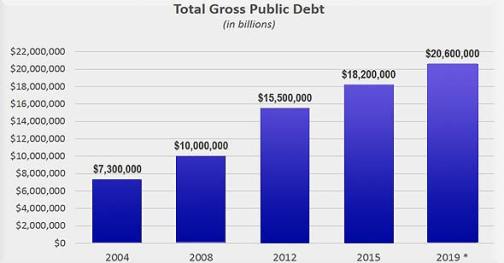 As this chart shows, President Obama has left the country with a very nice parting gift – essentially doubling the national debt to a swelling $20 trillion dollars – all purchased on “free” liquidity courtesy of the Federal Reserve.

But now, the U.S. will have to service that debt, as interest rates prepare to rise sharply from several years at or near zero.

To add fuel to that fire, private enterprise has been expanding its holdings in debt as well – creating a very volatile situation, though it will be delayed, and therefore, separated in the minds of most. According to Bill Bonner and Partners:

And total debt increased in the U.S. last year by $1.9 trillion… while GDP only went up $599 billion. For the corporate sector, it was worse. Companies took on $793 billion of extra borrowings against just $161 billion of extra output – five times as much debt as growth.

These are economic realities that few have the stomach to deal with, yet their repercussions could be felt be all Americans.

Thanks, Obama! These past eight years have been swell… 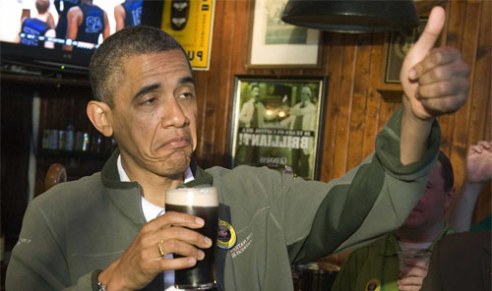 Will anybody be ready when the hammer drops?

So what can you do to get ready for the (likely) coming collapse?

Along with stocking up on food, water, medical supplies, alternative energy, guns, ammo and the like – one of the most important steps is getting out of debt:

Your best investment is getting out of debt. If you have $20,000 in a retirement account, you’re probably earning about 1% interest on it. At the same time, you might be paying 5% interest on your home. So, you’re losing money faster than you’re earning it. If you pay off your home, you have a net gain of 4.5%, even if you don’t have any money on hand.

The only investments that are secure during a financial collapse are precious metals and real estate.

Before even considering investments, you want to make sure that you have enough food and other supplies on hand. Ultimately, they are a much better investment than anything, even gold.

Don't forget to like SonsOfLibertyMedia.com on Facebook and Twitter.
The opinions expressed in each article are the opinions of the author alone and do not necessarily reflect those of SonsOfLibertyMedia.com.
Previous Post:
Barack Hussein Obama: I Am Barry Soetoro, But I’ve Never Used Another Alias
Next Post:
Former Army Chief Of Staff: We Need To Tackle ‘Radical Islamic Extremism Head-On’