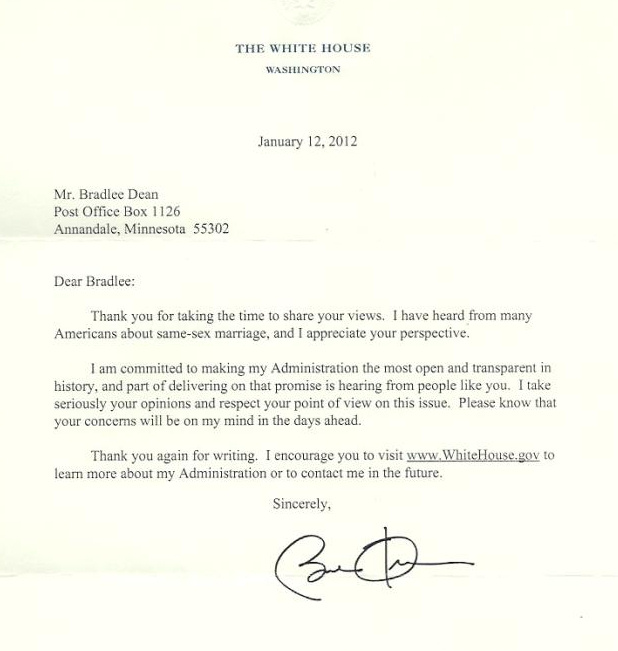 WorldNetDaily covered the story. Below is the Q & A in its original form with Bradlee’s response to President Obama’s letter.

WND: What message do you get from the president’s response?

BRADLEE: This individual is at war with America as you know it. He stated election eve 2008 that he wanted to “fundamentally transform the United States of America.” He purposes to demoralize, pervert, weaken, and overthrow America and our Constitution, with marriage and our children in his sights. He told the Department of Justice not to defend marriage (DOMA); he appointed an education czar who wanted to queerify the elementary; and he even went so far as to repeal the law that prevents sodomy and bestiality in our military when he signed the National Defense Authorization Act of 2012. Does not Barack know that Government’s whole purpose is to restrain men from sin (breaking the laws of our Mosaic Institution) and to “ensure our rights” (Thomas Jefferson)? It is not to advocate that which God condemns (as well as the American people) and not to take away our God-given rights, only in turn to give us privileges through Barack’s good graces. Apparently he doesn’t understand that “governments are instituted among Men, deriving their just powers from the consent of the governed.” It is “We the People” not “Barack and his unlawful administration.” 7 million people in California and 31 states have already made very clear that marriage is to be upheld the way God commanded – between a man and a woman.

WND: Do you think your request made an impact?

BRADLEE: What I can say is that they took the time to send me a response, directly from the president.

WND: What do you believe the impact of the president’s actions so far to be? What does it mean to American families, individuals?

WND: What do Americans need to realize based on what the president has done and is continuing to do?

BRADLEE: In my experience, American Christians and Conservatives are generally too “decent” and “civilized” to match up adequately with their radical adversaries, at least in the initial stages of the battle. They are too prone to give them the benefit of the doubt, to believe there is goodness and good sense in them. This radical president talks of justice and democracy and equality. People can’t really believe that he wants to destroy a society that has brought wealth and prosperity to so many people. Oh yes they can, and they are. This president and his administration mocks our laws, and even attacks our laws (he is suing governors for upholding them). The American people’s compassion is a weakness that their enemies do not and will not share. This president and his administration thrives on the indulgences of society’s understandings. The corrupt in government depend upon you in your ignorance of the Constitution and its embodiment of its laws.

WND: What do you think would be a good venue for citizens to express their concerns to the government, based on your experience with the president’s answer?

BRADLEE: We already see that this president is unwilling to be ruled by law, not knowing that it is the law that makes the president. The American people have already expressed their concerns to the government, and this president and his administration have time and time again responded with contempt and disdain. (Look to the ruling in California when 7 million people were overthrown by a corrupt justice system, again.) It’s time for the American people to invoke impeachment concerning this president, his administration, and corrupt judges throughout America. (This is already happening as seen when three Iowa Supreme Court Justices were ousted by voters after they implemented homosexual “marriage.”) The American people must be jealous over their liberty. As it’s inscribed on the National Archives in Washington, D.C., “Eternal vigilance is the price of liberty.”

WND: What do you think it will take to address your concerns?

BRADLEE: Let me put it this way, when you go to Arlington National Cemetery, and you see our men and women come back in boxes who have paid the ultimate sacrifice for the freedoms that we now have, to ratify and magnify the Constitution of the United States (which was ratified by their sacrifice), how can the American people allow this administration to desecrate their sacrifice any longer? The men and women died to magnify the Constitution while we let this administration desecrate the memory of those who laid down their lives, their fortunes, and their sacred honor. No more.

WND: Is there a solution that you, and others, can pursue?

BRADLEE: Martin Luther King comes to my aid to answer your last question. John and Robert Kennedy had called MLK into a meeting at the oval office during the civil rights movement in the 1960’s. He was asked by John and Robert to keep the issues in the courts. Martin Luther King knew that the courts would slow up, and at length, stop the process of them winning their God-given rights in which they had been fighting for. Martin responded to John and Robert, “I must take it to the people.” And to the people he took it.

Watch the highly offensive video below of the Homosexual Manifesto, which was entered into the Congressional Records, and which is being promulgated by this administration. It will give you understanding as to who you are dealing with.

Food Inflation In The US Set To Reach A Tipping Point
October 23rd, 2021 Conservative Firing Line