Mooch has broken her silence when she should have kept her big mouth shut.

The hate can only fester for so long before it has to come out.

During a recent chat with CBS, she showed America that she has not changed at all.

Everything is about race with this woman.

Gary Franchi has more in today’s Next News Network video:

Former First Lady Michelle Obama remains a dark horse 2020 candidate if she eventually chooses to jump into the race and if she does, it will likely be lingering bitterness that spurs her to do so.

Mrs. Obama is just below Oprah in the hierarchy of liberal goddesses and over the weekend, the ex-FLOTUS took her act to the Big Easy where she dished on a variety of topics at the big Essense Festival shindig.

Including how resentful that she was that Trump supporters who attended the traditional ceremony that shows how the USA honors the peaceful change of power with a crowd that was “NOT REFLECTIVE” of America.

During her chat with CBS News anchor Gayle King, Michelle carped about how much that she resented President Trump and wasted no time in playing the race card.

According to Barack’s better half, her spoiled daughters cried on the day that they were sent packing from their taxpayer-funded crib at 1600 Pennsylvania Avenue NW and to add insult to injury – she had to sit with white people during Trump’s inauguration.

Oh, the horror of it all!

Former first lady Michelle Obama revealed how she felt during President Trump‘s inauguration in an interview during the Essence Festival on Saturday.

Obama told journalist Gayle King that her children cried during the event because they were leaving their home of eight years.

“And then we had to meet the Trumps. That day was very emotional. And then to sit at that inauguration and to look around at a crowd that was not reflective of the country, and I had to sit in that audience as one of the handfuls of people of color. All that I had to hold on to over those last eight years, and it was a lot emotionally,” Obama said.

“We weren’t there to instill our legacy, but the upset it would cause the country. What saddens me is what it’s doing to the country as a whole. What we have to be really conscientious of is what kind of country we’re leaving for our children or grandchildren.”

MORE at The Hill…

Several former presidents and first ladies have been very vocal in their displeasure with President Trump.

The attacks come from everywhere and yet…

The people still flock to see him. 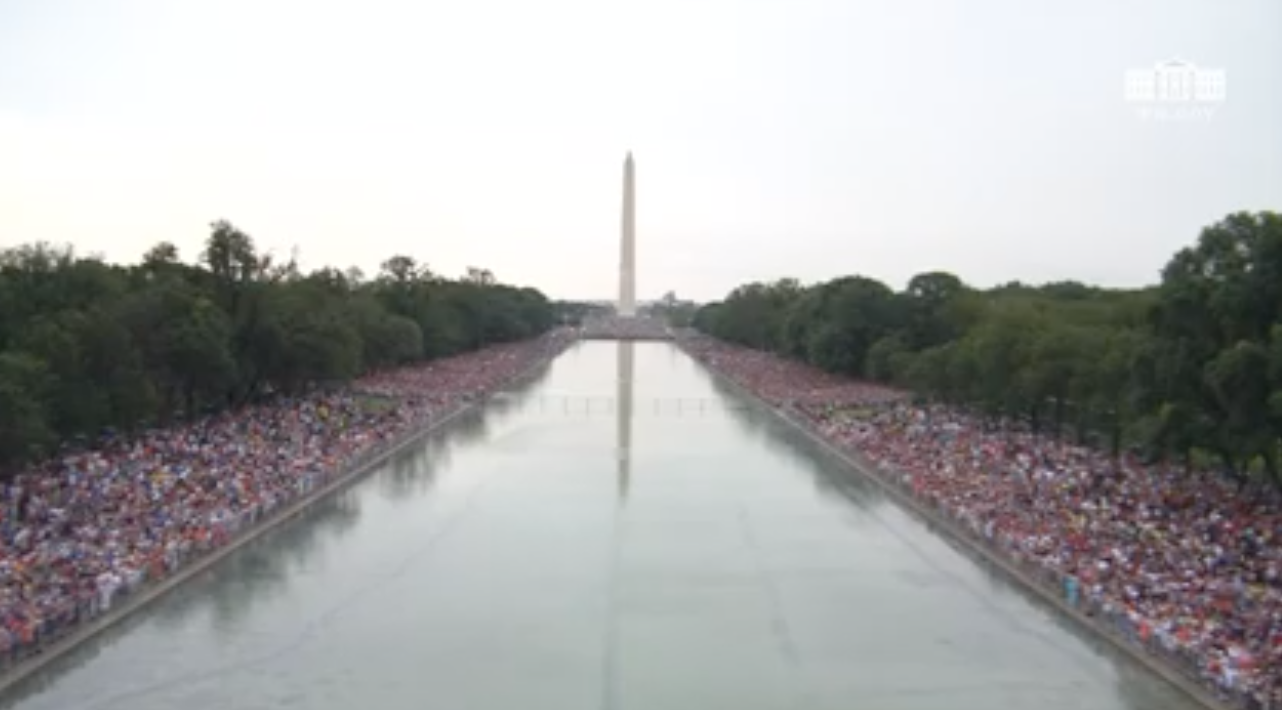 The mainstream media will not report the truth and political opponents bash our president.

The American people, however, think for themselves and love President Trump.

So, no matter how much Mrs. Obama or anyone else criticizes him, the people just keep showing up to support President Trump (like the above photo of the recent overflow Independence Day crowd.)

Don't forget to like SonsOfLibertyMedia.com on Facebook and Twitter.
The opinions expressed in each article are the opinions of the author alone and do not necessarily reflect those of SonsOfLibertyMedia.com.
Previous Post:
Outfoxing The FOX: President Trump UNLOADS On FOX News In Heated Twitter Rant
Next Post:
Violent Colorado State University Professor: “I’m Ready To Punch” Political Opponents “In The Neck”