When I attend jiu-jitsu classes I try not to stick out: “keep your head down, don’t get choked” is at the top of my agenda, there.

But when I overheard an outspoken woman talking to the coach about coronavirus vaccines, trouble was guaranteed. 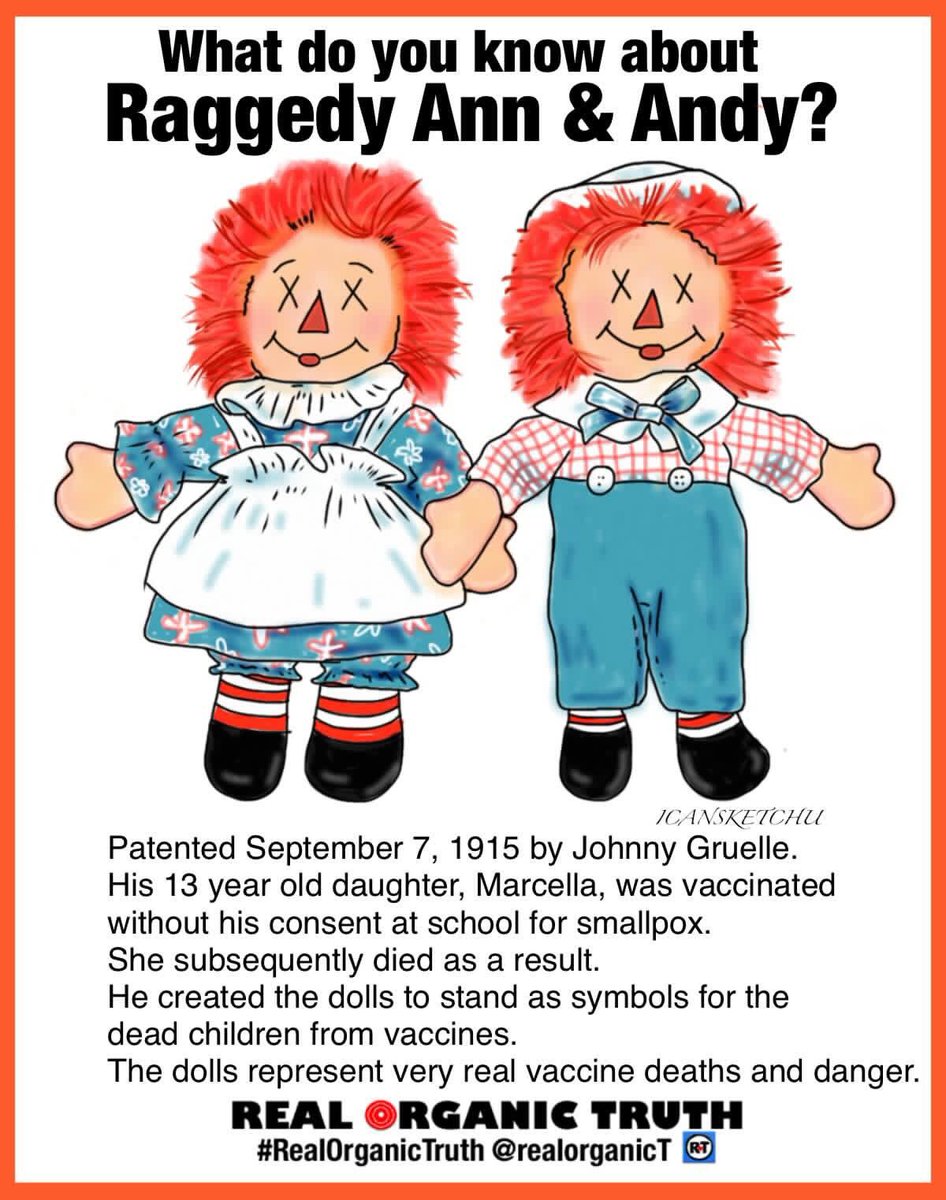 It turned out that she is one of thousands, probably tens of thousands, of citizens overwhelmed by the corruption and tyranny but not sure where to turn.

She knew to look into vaccines and quickly found streams of skullduggery.

She asked me, “Did you know that Raggedy Ann is the symbol of the ‘anti-vax’1 movement?”

I looked it up and the internet is filled with denials that yet weren’t definitive.

“Snopes”, the sycophant syndicate for the Satanists, calls the contention “Mostly False”.

“User-edited” Wikipedia is more bold in its denial and explains the spin this way: Raggedy Ann’s creator, John Barton “Johnny” Gruelle (born on “Christmas Eve” in 1880) had already submitted for a patent months before his daughter died of a “tainted” vaccine in 1915.

Gruelle did not create Raggedy Ann as a tribute to his daughter following her death at 13 from an infected vaccination; [Gruelle biographer and Raggedy Ann historian Patricia] Hall notes Gruelle’s May 28, 1915, U.S. Patent D47789 application for the design of the prototype that became the Raggedy Ann doll was already in progress around the time that Marcella fell ill, and the artist received final approval by the U.S. Patent office on September 7, 1915, the same month as Marcella’s death.  Nonetheless, the anti-vaccination movement adopted Raggedy Ann as a symbol, though Marcella died from an infected vaccination, not from the side effects of the vaccination itself.

Another source, the blog Epidemic Facts, also uses Hall as a source and states this—

Raggedy Ann was actually a symbol for the anti-vaccination movement in the early 20th century.  Raggedy Ann’s creator Johnny Gruelle, created the character after the death of his daughter Marcella.  Marcella was vaccinated for smallpox, but the school nurse said the vaccine didn’t “take” and gave Marcella a second vaccination without her parents’ consent.  Over the next few months, Marcella became progressively sicker and finally died in 1915 at the age of 13.  The loss was devastating to the Gruelle family.

Today, many people say that vaccination could not have killed Marcella.  Most say it was an unfortunate occurrence, but hardly the result of vaccination.  In fact the death certificate, states that the cause of death was valvular heart disease of several years’ duration with a secondary cause of edema lasting 90 days.  One theory is that an infected needle gave Marcella an infection that took hold on her heart and that was the cause of death.  (The medical name for this condition is bacterial endocarditis.) …

One of the interesting things Patricia Hall’s book brings up is that ten days after Marcella’s second vaccination, she came home from school complaining of pains in her legs, one of the first symptoms of Guillain-Barre syndrome (GBS).  After that, the disease quickly became so bad that Marcella had to stop going to school.  This fits with rapid weakness and paralysis that accompanies GBS.  And while heart disease is listed on the death certificate as the cause of death, GBS is known to cause cardiac and respiratory problems, even death from these complications.

The medical community has been trying to distance GBS from vaccination lately, but the fact remains that a strong association has existed since the 1976 flu vaccine was found to cause more cases of GBS than normal.  In fact, almost every vaccine package carries warnings about GBS.  So while we don’t have a complete picture of Marcella’s symptoms and early twentieth century medicine was little aware of the possibility of severe reactions from vaccination, it is possible the Guillain-Barre Syndrome from a vaccination killed Marcella Gruelle.

It took a concerted effort to use the date of the patent application as an excuse to dismiss the facts of Marcella Gruelle’s tragic sickness and death.

In the light of tragic reality, the lifelessness of Raggedy Ann / Raggedy Andy dolls is moving.

“Journalists” on the dole of a Machine intent on continuing the billion-dollar Big Pharma business, resort to name-calling with the word “creepy” topping the list.

I didn’t have a Raggedy Ann doll when I was little, but I had Raggedy Ann books, written and illustrated by one Johnny Gruelle. The one I especially remember was called Raggedy Ann’s Lucky Pennies. What I mostly remember about it was that it was dark and deeply weird. …

That’s really creepy. No wonder the books were dark!

“Orthodox Jew” Tevi Troy is the President of the “American Health Policy Institute”.  He was also the “Deputy Secretary of Health and Human Services” for Skull and Bones President George Bush (#43).2, 3

Troy reviewed two books for the “Hudson Institute”.  One was from medicine apologist Robert Goldberg4 and the other was from Paul Offit.

Over the last few months, we have seen the final and decisive disavowal of the work of Andrew Wakefield.  Sadly, the damage this man has done is almost incalculable.

More than a decade ago, Wakefield set off a frenzy of fear when he presented “data” in the British medical journal Lancet that cast doubt on the safety of vaccines.  Lancet eventually retracted the article, and only recently it was revealed that Wakefield may have had financial incentives to publish his spurious findings.  Unfortunately, uninformed citizens, sensationalistic journalists, and opportunistic celebrities continue the momentum of his discredited work — endangering individual lives and our public health.  As vaccine advocate and expert Paul Offit has said, “You can’t unring the bell.” …

Offit also tells the tale of the creepy and iconic doll Raggedy Ann, which was created by cartoonist Johnny Gruelle after his daughter Marcella died following a smallpox vaccine.  According to Offit, Raggedy Ann’s floppy arms and legs were supposed to signify a child harmed by a vaccination, despite the fact that “the medical report stated that the child had died from a heart defect.”

If it seems like all of these poison apologists are reading from the same script, you should stop by my Odysee channel and look up my examples of local news scripting.

But the bottom line is, one of Big Pharma’s biggest cheer-leaders did, in fact, contradict Snopes, Wikipedia and the platoon of poison propagandists.

Anti-vaccine activity in America also produced a popular icon.  In 1915, Johnny Gruelle, a cartoonist and illustrator in New York City, watched his daughter, Marcella, die following a smallpox vaccine.  Even though the medical report stated that the child had died from a heart defect, Gruelle blamed the vaccine.  In his daughter’s memory, he created a doll with red yarn for hair and floppy arms and legs — a symbol of children harmed by vaccines.  He called it Raggedy Ann.5

Troy must’ve missed this exposé by CBS reporter Sharyl Attkisson exposing the millions of dollars from Big Pharma that prop up the propaganda of Paul Offit.

The power of the vaxxers to promote poison and pervert the past is so pervasive it’s… “creepy”.

Don't forget to like SonsOfLibertyMedia.com on Facebook and Twitter.
The opinions expressed in each article are the opinions of the author alone and do not necessarily reflect those of SonsOfLibertyMedia.com.
Previous Post:
Another Disney Employee Busted In Undercover Child Sex Predator Sting – 12 Arrested
Next Post:
Some Reflections On Fatherhood In America

About the Author: Johnny Cirucci

Johnny Cirucci is the publisher of JohnnyCirucci.com. He is a prolific author and exposes the Vatican and Roman Catholicism, as well as preaches the true, saving Gospel of Jesus Christ. He is a guest on many radio shows, as well as a contributor to both SonsOfLibertyMedia.com and The Sons of Liberty Radio.