Following the collision of the USS John McCain with a 600-foot oil tanker, several sailors were missing.  Now, they have all been accounted for thanks to the recovery work of divers.

The list of sailors who have been recovered are as follows: 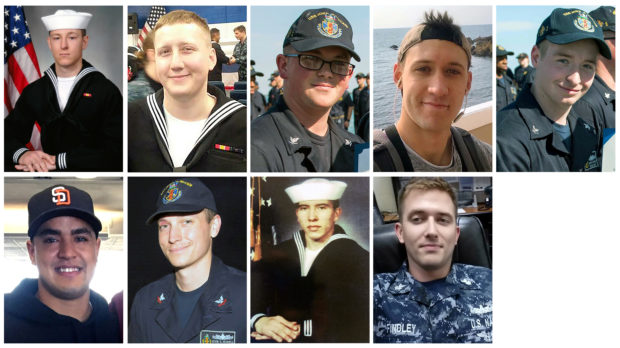 Over the weekend, the search for the missing sailors was suspended.

The sailors were killed when the Arleigh Burke-class guided-missile destroyer USS John McCain and the tanker Alnic MC, according to the 7th Fleet Public Affairs Office.

Speculation arose that the ship was hacked, but as of our report on the 23rd, there was no evidence to support it.

However, others are pointing out the circumstances of the collision make it probable that something besides human error was involved.

There’s something more than just human error going on because there would have been a lot of humans to be checks and balances,” Jeff Stutzman, the chief intelligence officer at Wapack Labs, told McClatchy.

“When you are going through the Strait of Malacca, you can’t tell me that a Navy destroyer doesn’t have a full navigation team going with full lookouts on every wing and extra people on radar,” he added.

Whatever the cause, two days after ordering a rare suspension of ship operations worldwide, the Navy relieved the commander of the fleet that had sustained four accidents in Asia and the deaths of more than a dozen sailors this year, according to The New York Times.

“Vice Admiral Joseph P. Aucoin, the head of the Seventh Fleet, the Navy’s largest overseas, was removed Wednesday in connection with the four accidents since January, including two fatal collisions in the past two months, according to a statement by the Navy,” The Times reported.  “Admiral Aucoin had been expected to retire in the coming weeks, but his superiors pushed up his departure date after losing confidence in his leadership.”

Don't forget to like SonsOfLibertyMedia.com on Facebook, Google+, & Twitter.
The opinions expressed in each article are the opinions of the author alone and do not necessarily reflect those of SonsOfLibertyMedia.com.
Previous Post:
Islamic Republic of Mauritania Defies International Pressure & Refuses to Free Slaves
Next Post:
Sanctuary City Released Illegal Alien Trump Admin Flagged – 2 Weeks Later, He Murdered His Girlfriend

Can experimental mRNA vaccines act as bio-weapons and transmit coronavirus spike proteins to the unvaccinated?
May 8th, 2021 DC Clothesline