Roe vs. Roe: Women Harmed By Abortion Speak Out

Recently, a group of abortion advocates, as part of the National Network of Abortion Funds, set out to solicit people to speak out on behalf of abortion through their personal stories. They call it: “We Testify – Storytellers Rise Up for Roe.”

That got me thinking about how there are many women who could testify to the exact opposite of what the abortion advocates want to hear. Having an abortion turned out to be a disastrous turning point in their lives.

Through the years of my broadcast ministry, I’ve had the privilege to interview many women who have had abortions and came to regret it. For example, Carol Everett, who not only had an abortion but went on to become a part-owner of a few abortion clinics in the Dallas area. She once told me: “Nothing [in my life] worked after my abortion.” But, she reasoned, if in some twisted way, she could talk other women into having an abortion, maybe her own abortion wouldn’t seem so wrong. She went on to become partly responsible for some 35,000 abortions, and the money was good.

But then Carol found Christ – whom she was not seeking – or more accurately, Christ found her. She is now very happy to work for the pro-life side.

Women regretting their abortions is a common phenomenon. Consider these testimonies:

Monica: “The worst part of abortion to me is the emptiness. … I deprived my daughter of her sister or brother, or my son of a sister or brother. And sometimes when I see my family, I feel like it’s incomplete, because I notice that third person is missing.”

Janice: “The abortion was humiliating. It was dehumanizing. I lost my dignity there in that clinic. I lost my self-respect. It was a very unpleasant procedure.”

Raquel: “God has healed me and brought me to a new place, but there’s still that pain, that loss that never goes away; you don’t forget. … It wasn’t quick. It wasn’t painless. It was horrible. No woman should ever have to endure that type of procedure, or even those lies that they said, that I would ‘forget.’ Because you don’t forget it.”

As the abortion advocates try to conjure up women to testify on behalf of Roe, how about hearing from Roe herself?

McCorvey did a television interview with D. James Kennedy Ministries in the late 1990s. In that interview, she said, “My story began … in 1969 when I found myself pregnant, on the streets. I was into drugs, and I really didn’t have any other alternatives in line. I did not believe in God, and I’d fallen away from the church at a very early age. In retrospect, when I look back on those days and I see what a sad person I was, I have to really kind of smile and think about little Emily – a little 7-year-old girl who came up to me at my office one day and told me that if I knew God that I wouldn’t be going to the place downstairs. She befriended me when Operation Rescue moved in next door to the abortion clinic where I worked. And at first, I didn’t like them there because they reminded me of what we were doing.”

She further testifies: “I really hadn’t been happy with anything that I saw in the pro-abortion movement. … They don’t really care about women. All they care about is your money. But once you’re gone, they don’t know you. … They took your baby, and they left you just a shell of a woman – just a shell.”

McCorvey never had an abortion herself – the Supreme Court decision did not come until after she had already given birth – but she has seen what it does to women who have had them. She came to deeply regret her participation in the Court decision that bears her pseudonym.

Describing herself in the third person, “Roe” said, “What Roe v. Wade did for Norma McCorvey was send her into about a 20-year spin of depression and lesbianism and alcoholism. And it was just like living in the pit of hell.”

Abortion is a human tragedy. In my opinion, it continues to bring God’s wrath down on this nation. The sooner America moves away from the abortion ethic, the better off we will be. I guess the ultimate test is, going forward, which Roe should we listen to? The pre-conversion Norma McCorvey or the one whom Christ had made new? Let’s embrace the new and improved Roe, who testified, “Now that I’ve become a Christian. … I’m 100 percent pro-life. … I’m a much happier person.”

Don't forget to like SonsOfLibertyMedia.com on Facebook, Google+, & Twitter.
The opinions expressed in each article are the opinions of the author alone and do not necessarily reflect those of SonsOfLibertyMedia.com.
Previous Post:
Las Vegas Police Won’t Release Video Footage of Las Vegas Shooter – Admit Other Suspects Investigated For Charges
Next Post:
State-Funded Broadcaster: Publicly Shame Large Families – Bring In More Migrants Instead 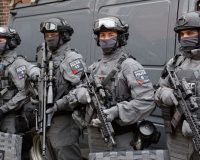 CNN’s Chris Cuomo Gets Absolutely Humiliated By Trump’s Director Of Comms On His Own Show (VIDEO)
October 27th, 2020 Clash Daily