Russian Satellite Will Launch In Two Weeks, Will Be The Brightest Star In Sky

Mayak, a Russian satellite that will become one of the brightest stars in the night sky, is just two weeks away from launching into space.  Their goal is to make the unique satellite bright with the use of a giant reflective sheet of material, but some scientists are warning that there may be negative consequences.

The satellite is small, roughly the size of a loaf of bread and in the form of a CubeSat.  It will be launched on a Soyuz 2.1v vehicle on Friday, July 14, from Baikonur Cosmodrome in Kazakhstan, as a secondary payload. The project, led by Moscow State Mechanical Engineering University (MAMI), raised more than $30,000 on Russian crowdfunding website Boomstarter.

Once in orbit, about 600 kilometers (370 miles) high, the satellite is designed to unfurl a giant pyramid-shaped solar reflector. The goal is for this satellite to shine brighter than any other star in the night sky. To do this, its reflector made of Mylar will span 16 square meters (170 square feet) and is apparently 20 times thinner than human hair. The mission is also acting as a technology demonstration, to test how to brake satellites in orbit and de-orbit them.

“Mayak,” which translates to “Beacon” in English is controversial though.  “We want to show that space exploration is something exciting and interesting, but most importantly that today it is accessible to everybody who is interested,” project leader Alexander Shaenko said, reported Sputnik News.  Mayak’s only mission is to be bright and remove defunct satellites from earth’s orbit.

But it runs the risk of a backlash from scientific and environmental groups, depending on how bright it is. Some, like Russia Today, have suggested it may shine as bright as the Moon, although that is questionable.  Nonetheless, if it is excessively bright, it could cause havoc for astronomers who rely on darkness to observe the universe. “We fight so hard for dark skies in and around our planet,” Nick Howes, an astronomer and former deputy director of the Kielder Observatory in Northumberland, told IFLScience. “To see this being potentially ruined by some ridiculous crowdfunded nonsense makes my heart simply despair.”

Skeptics won’t keep the satellite from launching though. Russia will put Mayak in space in about two weeks, on July 14.  We’ll have to wait to see just how bright it is and if it’s bright enough to warrant complaints from scientists.

Don't forget to like SonsOfLibertyMedia.com on Facebook, Google+, & Twitter.
The opinions expressed in each article are the opinions of the author alone and do not necessarily reflect those of SonsOfLibertyMedia.com.
Previous Post:
New Life Breathed Into Intersex Navy Veteran’s Fight Against State Department Passport Denial
Next Post:
We Need A New Political War On Globalism

***draft / BREAKING: THIS Country DEMANDS 70% Of Population Take The Jab, Or Everyone Stays On Lockdown
AFF 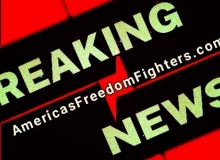