I previously reported on a homeowner who shot and killed an intruder who held a gun to a woman’s neck. That happened in Memphis just before Christmas. On Saturday, a shooting took place about 9 miles from where the previous shooting took place. This time the homeowner warned three burglars not to come near. That was the last two of them heard as they continued towards the homeowners and he fired several rounds killing two of them.

WREG reports that the area in which the shooting took place is “anything but quiet” and that neighbors are used to having their homes broken into. In fact, one man said it’s been an ongoing problem for 2o years.

However, at least two problems no longer exist in the community.

18-year-old Jordan Mitchell and 20-year-old Melvin Atkins were shot and killed by a homeowner early Saturday morning as they attempted to rob a home on Denison Street.

The homeowner found three men attempting to burglarize his home. He warned them not to take another step toward him, but they refused to heed the warning. The homeowner then fired several bullets, striking two of the men and killing them. The third man escaped.

One neighbor told WREG, “Anybody with common sense, if you walk in your house and there’s two people in there ain’t got no business in there, got guns, you’d do the same thing he did.”

Antonio Ventura, a neighbor and father of two children, said that his neighbor who shot the two burglars had been a target of crime before and that he was concerned his house would be next.

“This is the second time it happened to him cause the last time not long ago, maybe like a year ago I hear he came back from work and somebody followed him and beat him up and they took his truck and run away,” he told WREG.

Once again, no charges were filed against the homeowner and police continue to be on the lookout for the third man.

This is just one more reason along with government tyranny, Islamic jihadists and simple self-defense as to why every American should be armed and trained to use their weapon.

If you have any information, please call CrimeStoppers at 901-528-CASH.

Don't forget to like SonsOfLibertyMedia.com on Facebook, Google+, & Twitter.
The opinions expressed in each article are the opinions of the author alone and do not necessarily reflect those of SonsOfLibertyMedia.com.
Previous Post:
Homeowner Shoots & Kills Man Holding Gun to Woman’s Neck
Next Post:
Obama & Co., Activists Have Cultivated Completely Irrational Black Following 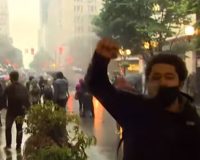