Sheriff On Culture Of Violence: “Gun Didn’t Change. We Changed.”

This is a few months old, but the message remains the same in the face of gun grabbing politicians wanting to confiscate our arms and infringe on our right to both keep and bear them.

Last year, a 15-year-old student opened fire at a high school near Spokane, Washington.  While the media and politicians attacked gun owners, the rights of those owners and the Constitution, one sheriff stood up and pulled back the curtain on what the real problem is… and that message has not changed in the wake of the Florida school shooting this week at Marjory Stoneman Douglas High School.

Some things I agree with here, and other things I disagree with, but it’s the comments about how people with guns have changed that really hits home in the attack by those not wishing to respect our rights.  Take a look and listen carefully.

Trending: George Floyd Worked Security At Same Nightclub As Officer Who Killed Him

“This is a situation that plays out in our society way too often, and we as a society need to make a determination as to what’s causing this,” said Spokane County Sheriff Ozzie Knezovich following the shooting.

“This young gentleman got sucked into a counterculture of violence, a culture that is enamored with school shootings,” the sheriff said, going on to blame the media for glorifying such people.  “And media, you are to blame for that, because you keep giving these people headlines. You keep using their names. You have made them heroes to some people. If I had my way, none of these people’s names would ever be remembered.”

Well, to be fair, in reporting, we often use names.  I suppose doing it over and over again in a manner that does glorify the individual probably does have some impact.

“Where did we really go sideways in raising our kids?” he asked.  “Perhaps we taught them to glorify the wrong things. All this violence that they constantly consume has come home to pay a major price. It is time for each and every one of us to say no more to the hate that we see, to the violence that we see.”

Well, amen to that.  We should, but violence is not a bad thing at all.  Sometimes violence is actually good, it all depends on the motive and whether that violence is justified.  Clearly, he was speaking about that which is unjustified.

“[Lawmakers on] both the right and the left, you’re both enamored by radicalized hate,” the sheriff said, calling out those who attempt to polarize people.  “You seem to hate everybody and everything. It’s time for you to end that too.”

That is true too.  Sadly, telling the truth and holding to the law is now polarizing in the midst of that.  That’s something I’m all for here.  We should hate unlawfulness, but show love to our enemies.

The sheriff then added, “They [the federal government] have pushed this problem to the local level, and the local level is not equipped to deal with it. This is a state and national issue that they better wake up and start dealing with.”

The federal government has been given no authority to deal in that matter.  Local is the best place to deal with mental health issues.  That is for families to deal with, not government, and especially not the federal government.  By what standard would they even deal with that in the first place?  The sheriff just got finished talking about how they are promoters of hate for goodness sakes!

However, here is where the sheriff was right on target.

“I can tell you, folks, I carried a gun all my life. I hunted, I shot. My friends and I…It’s huntin’ season back home. When I was in high school, every one of those rigs in the high school parking lot had a gun in the gun rack. Why? We went huntin’ on the way home. None of those guns ever walked into a school. None of those guns ever shot anybody. What’s the difference? Did the gun change? Or did you, as a society, change? I’ll give ya odds that it was you as a society, because you started glorifying cultures of violence. You glorified the gang culture, you glorified games that actually give you points for raping and killing people. The gun didn’t change, we changed.”

Don't forget to like SonsOfLibertyMedia.com on Facebook, Google+, & Twitter.
The opinions expressed in each article are the opinions of the author alone and do not necessarily reflect those of SonsOfLibertyMedia.com.
Previous Post:
Enough of the Hyphenated Christians
Next Post:
Trey Gowdy To Gun Grabbing Politicans: “Show Me a Law That Will Prevent the Next Mass Killing” 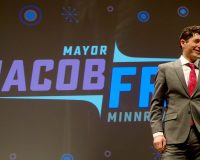