So, The Unconstitutional ATF Is Attacking The Q Honey Badger Pistol – You Can Get One Absolutely Free!

While the Trump administration claims to protect your Second Amendment rights, they have illegally and ex post facto banned bump stocks, as well as promoted with your tax dollars red flag laws across the country. Over the past few weeks, the Trump administration’s Bureau of Alcohol Tobaccos Firearms & Explosives has targeted the Q Honey Badger pistol, but I’ve got news for you… you can get one absolutely free (See below to win!).

If you are not familiar with the ATF’s attack on the Honey Badger, check out the following to get caught up.

Remember, the US Constitution does not allow, no matter what unconstitutional legislation Congress has passed, the federal government to restrict or regulate your keeping and bearing of arms of any kind, but that’s what they are doing.

So, what’s the deal with the Honey Badger?

The NRA-ILA has the story:

Since 2012, ATF has repeatedly found that firearms with pistol stabilizing braces, like the one equipped on Q’s Honey Badger pistol, are not “designed, made, and intended to be fired from the shoulder,” and are therefore not subject to regulation under the NFA. Now, with no notice or opportunity for public input, ATF appears to be reversing course.

Rather than create a clear set of rules that law-abiding gun owners and manufactures can follow, ATF seems to be taking a “I’ll know it when I see it” approach to classifying firearms. This arbitrary approach is clearly inconsistent with the right to keep and bear arms and due process of law.

By blurring the lines on legal definitions that carry serious criminal consequences, ATF is putting law-abiding gun owners, the firearm industry, and law enforcement in the impossible position of attempting to read the minds of ATF bureaucrats when complying with or applying federal law.

As a result of the ATF’s illegal actions, there is a 60-day suspension regarding the Honey Badger pistol.

Several sources have been willing to talk, off the record, about what is going on in the ATF. None are currently inside the agency. None were willing to be quoted. All have had considerable contact with the agency over past years.

In the article, sources inside the ATF state Acting Director Regina Lombardo is “not loyal to the president”.  They state Associate Director Marvin Richardson believes pistol braces “violate the NFA”.

Believing pistol braces violate the NFA appears to be a common position inside the ATF. ATF rulings on pistol arm braces have been contradictory.

An Acting Director of the ATF is not required to be personally loyal to a President, but they should be expected to follow DOJ directives.

Lombardo was next in line after Acting Director Thomas B. Brandon retired at the end of April of 2019. The simplest thing to do was to make her Acting Director while waiting for approval of a direct appointment by President Trump.

GOA actively worked to prevent the appointment of Chuck Canterbury.  That meant Lombardo continued on as Acting Director, at least through the election.  The Giffords organization, which seeks numerous restrictions on gun ownership and use, approved of Lombardo’s appointment as acting director.  From Giffords press release:

“Regina Lombardo is a career special agent who has served our country at ATF for over 25 years. We support her ascension to the top role at the agency. Congress and the Trump administration must now provide the increased funding and resources she needs to succeed in an agency that has been historically underserved.”

As someone who has studied bureaucratic dynamics for years, it appears ATF is being obstructionist, waiting out the election.

So, who authorized it?

“The letter states that the suspension, ‘will remain in effect for a period of sixty (60) days . . . unless withdrawn or extended by ATF.’  The stated purpose of the suspension is to allow the Department of Justice (‘DOJ’) an opportunity, ‘to further review the applicability of the National Firearms Act to the manufacture and transfer of the model ‘Honey Badger Pistol’ firearm.’”

It also provides an opportunity to get to the bottom of who exactly at ATF has been behind the move before the suspension is withdrawn. That’s because my attorney, Stephen Stamboulieh, filed a Freedom of Information Act request on my behalf asking for documents that could reveal who authorized the determination that the  National Firearms Act had been violated and that Q, LLC, and thousands of gun owners could be considered in criminal violation.

The window of opportunity could close before the 20-business days ATF has to respond to the FOIA have passed if Joe Biden wins the election on November 3. That’s because certain facts, and the absence of certain information, have led to the speculation that the move was made by entrenched ATF employees seeking to demoralize gun owners by having “Trump’s ATF” enact another negative ruling against them.

That’s a potential I raised in an October 9 Firearms News piece, “Will President Trump Let ATF Continue to Rule by Unchecked Diktat with Honey Badger ‘Reclassification’?” That the order came out of the Boston Field Division was the first indicator that seemed curious. Did “leadership” sign off on the Honey Badger decision?

“ATF Acting Director Regina Lombardo, who is not President Trump’s pick to lead the ATF, is a career bureaucrat. AmmoLand News’ sources inside the agency say she is not loyal to the president. Several independent sources have stated that Lombardo has a narrower definition of the Second Amendment than President Trump & the rest of America. Sources also tell AmmoLand News that Associate Deputy Director Marvin Richardson, another career bureaucrat, has an ax-to-grind against pistol braces and believes they violate the NFA but doesn’t think that they have the political capital to make a move against the millions of accessories under a Trump presidency.”

“The Boston Field Office of the ATF issued the Honey Badger Cease and Desist letter. They claimed the Firearms and Technology Division determined the firearm is a short-barreled rifle. It is not clear if Lombardo and/or Richardson approved of the letter before it went out.  In a well-run Bureau, such a sensitive item would not be sent out without approval from the top brass.”

I explored that lack of clarity in my Firearms News piece by consulting with friend and colleague Len Savage, firearms designer, expert witness, and President, Historic Arms, LLC:

“As to the Honey Badger Issue specifically: Why is a field office making national policy for ATF and why was this not a release from HQ or Firearms Enforcement Programs?” Savage questions. “Has anyone asked for ‘Correspondence Approval and Clearance Form’ (ATF form 9310.3A)?

“It will have every ATF official who signed off on this nonsense…Perhaps somebody should ask to see it?” he continues. “Also, there should also be a ‘ATF Report of Technical Examination’ (ATF form 3311.2)?

“This form should be the basis of any determination and if there is not one to support the ‘Correspondence Approval and Clearance Form,’ well them somebody made this up out of whole cloth and those somebodies signed off on it before it was sent out,” Savage concludes. “It not hard to find out, it’s getting anybody to give a damn.”

I give a damn and we’ll see if it’s hard to find out. Hence this latest action.

“Please see attached FOIA,” Stamboulieh wrote to ATF in a Thursday email.  “It is also being sent by fax.”

Now we see if they respond timely, claim a Covid delay, or balk at sending altogether if a pending new regime allows it.

Never fear though.  You can win your very own Honey Badger pistol chambered in .300 Blackout with an EO Tech XPS3 holographic Sight and Surefire Mag5 60-round magazine that’s worth $3,300!  and if the ATF changes its mind, illegally I might add, Q will pay the tax the federal government wants from you for this pistol!  It’s a super sweet deal!  Click below to enter! 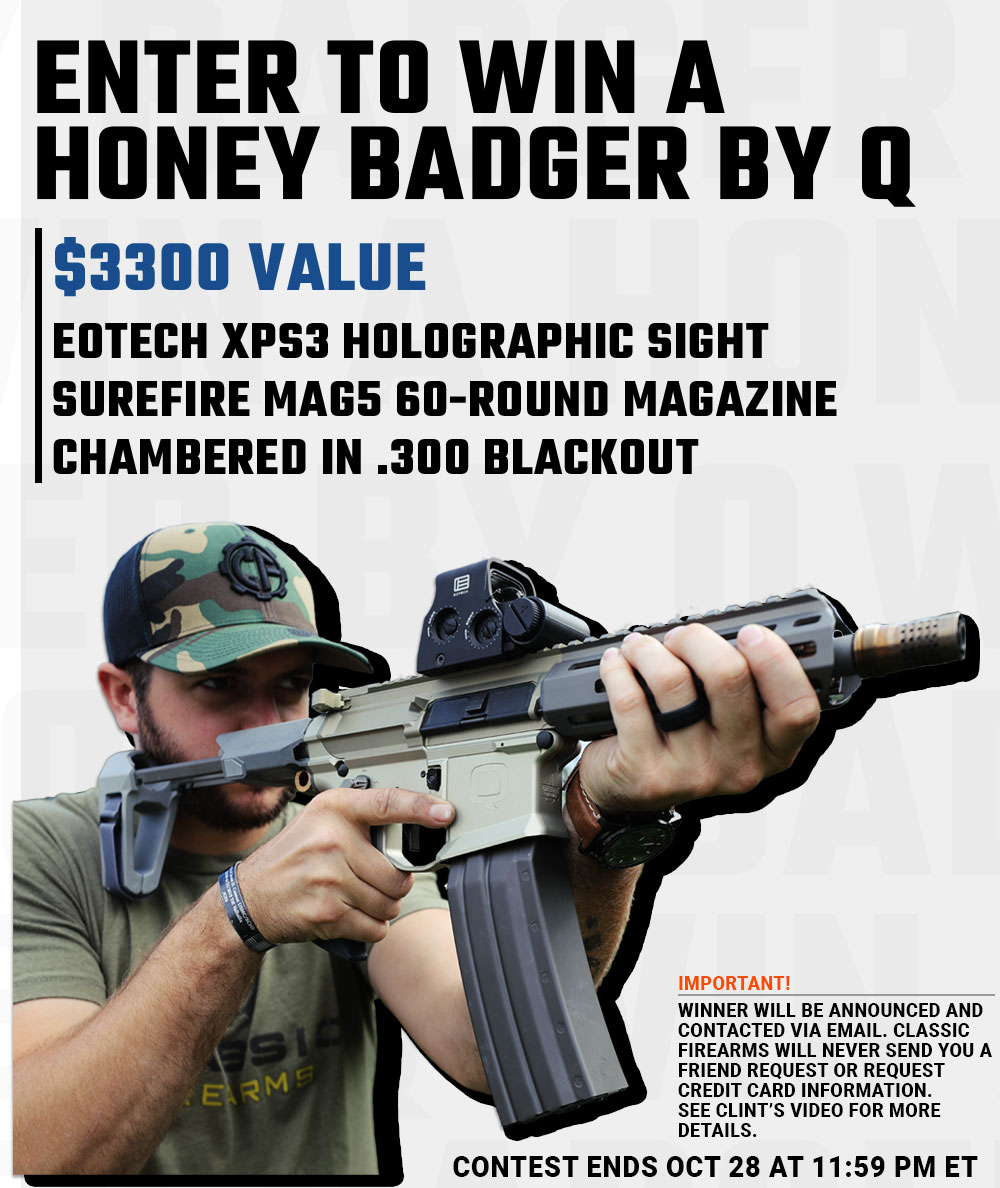