These so-called Facebook violations are examples from just 1 group. These posts have been removed, restricted, or tagged for various excuses from some being rated as false to others being labeled as missing content. Those labeled as missing content are articles posted to this group which Facebook simply cannot dispute the information, but have to leave a message because it simply does not adhere to their political agenda.

I have personally read all of these posts and can safely say that most of them are presenting the truth, they just do not fall into Facebook’s political agenda.

One article labeled as False information is fact-checked by what FB calls Science Feedback and states VAERS (Vaccine Adverse Event Reporting System) a government entity basically states that adverse events in people who received covid-19 vaccines doesn’t demonstrate that these effects were caused by the vaccine. 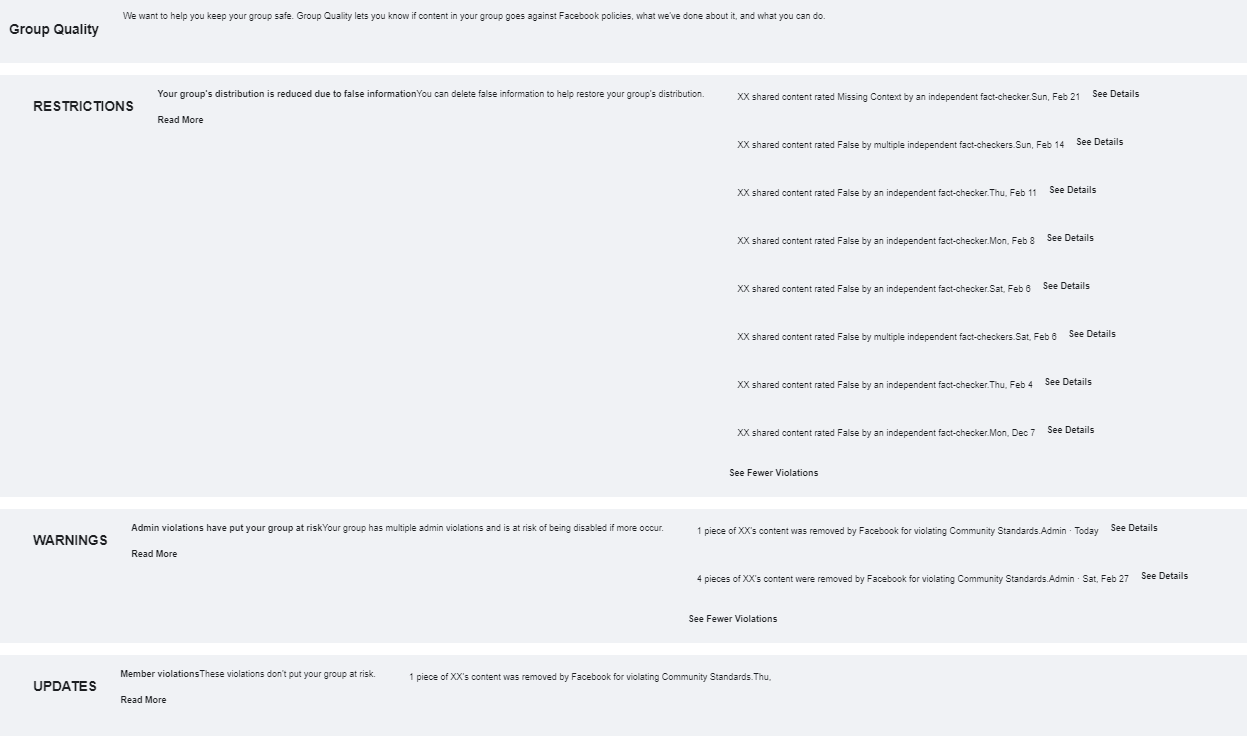 This labeling as false information by FB is simply outrageous because there are thousands of people around the world who have had very bad reactions and thousands who have died after receiving the vaccine.

We can recall the blatant censorship by both Twitter and FB last year where they both refused to carry the New York Post article exposing Hunter Biden’s financial connections to Burisma and Joe Biden’s involvement in making it happen.

The same thing happened when the news broke of the Hunter Biden laptop evidence. Search engine Google even limited access to the information and FB and Twitter banned all posts on the topic.

YouTube is no better than the rest with its recent ban on President Trump’s CPAC speech, suspending the RSBN channel for airing it, along with numerous censoring of individuals and companies for what amounts to not adhering to their community standards of anti-American Socialism.

The biggest violation to free speech comes from FB and Twitter banning any and all content dealing with election fraud in last year’s presidential election. This occurred even though the evidence proving massive fraud and manipulation of the numbers is out there in plain sight.

Both President Trump and the My Pillow Guy Mike Lindell are banned for life from Twitter for questioning the integrity of the last election. Mike Lindell has gathered together perhaps the best evidence of anyone, showing detailed proof of voter fraud and manipulation.

What we have here with FB and Twitter specifically are two so-called information-based tech giants masquerading as social media outlets. Neither of them is what they say they are or they would not be suppressing, limiting, and banning all information that goes against their Nazi core-based Socialist agenda. They are absolutely no better than the main media who doesn’t report the news to the public to assimilate it but propagandizes every piece of news and information to brainwash the public into believing the agenda.
Facebook Twitter Pinterest