I pray Israel blows up the transports en-route.

The U.S. sent nearly 600,000 small arms, 76,000 vehicles and 208 airplanes to Afghanistan. The most recent quarterly report of the U.S.-led military coalition documented deliveries of 174 Humvees, nearly three million rounds of ammunition, and nearly 100,000 2.75-inch rockets during the period.

The Taliban now have more Black-hawk helicopters than Australia. 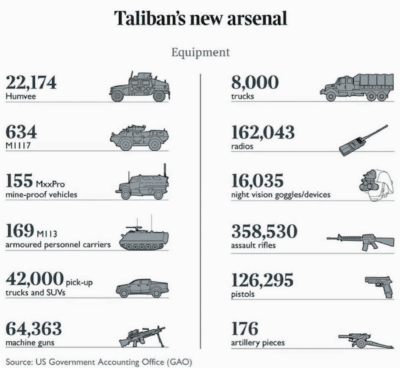 US military equipment from Afghanistan emerges in images form Tehran.

The Taliban has begun turning over American-made military equipment to Iran, according to a report by Iran International.

According to the report, images on social media show military equipment which was given to the Afghan army by the US in Tehran and other parts of Iran.

Two of the images were posted by acting Defense Minister of Afghanistan Bismallah Mohammadi, who called Iran a “bad neighbor” and said that the country’s “bad days are not eternal.”

The US left behind billions of dollars worth of equipment behind in Afghanistan when it completed its withdrawal from the country Tuesday morning.