Teacher Facing Charges Of 29 Counts Of Sex Crimes Against Minors

This obsession with sex in our culture is leading to all sorts of perversion.  Whether it is the woke crowd pushing their fictitious 52 gender nonsense or the sodomite agenda or pedophiles or those who are adults engaging minors in sex, it is far more dangerous and sometimes even deadly than the plandemic.  The latest to be caught preying upon our children is a 35-year-old California female teacher who has been charged with 29 counts of sex crimes against minors.

From the Office of the District Attorney for Contra Costa County’s Facebook page:

Today, the Contra Costa County District Attorney’s Office formally charged a Richmond teacher with 29 counts of sex crimes against minors. This was an excellent collaborative effort by multiple agencies, including extensive follow-up by Richmond PD officers and detectives, our allied agencies, and our prosecutors’ office.

A former Richmond school teacher is facing multiple charges of child molestation.  The Contra Costa District Attorney’s Office filed 29 counts against Anessa Paige Gower on April 8, 2022, in Contra Costa County Superior Court.  Gower was a biology teacher at Making Waves Academy in Richmond and allegedly engaged in numerous acts of a sexual nature with minors between 2021-2022.

Richmond Police, with assistance from the Sacramento County Sheriff’s Office, arrested Gower at Sacramento International Airport on April 6, 2022, as she was returning to California from Hawaii.  She is currently in custody in Richmond.

The case involves seven minors, so their identities are being withheld.

Investigators took statements from the victims and witnesses about a number of incidents involving sex acts with minors, inappropriate touching, and sharing sexually graphic photos over online platforms. 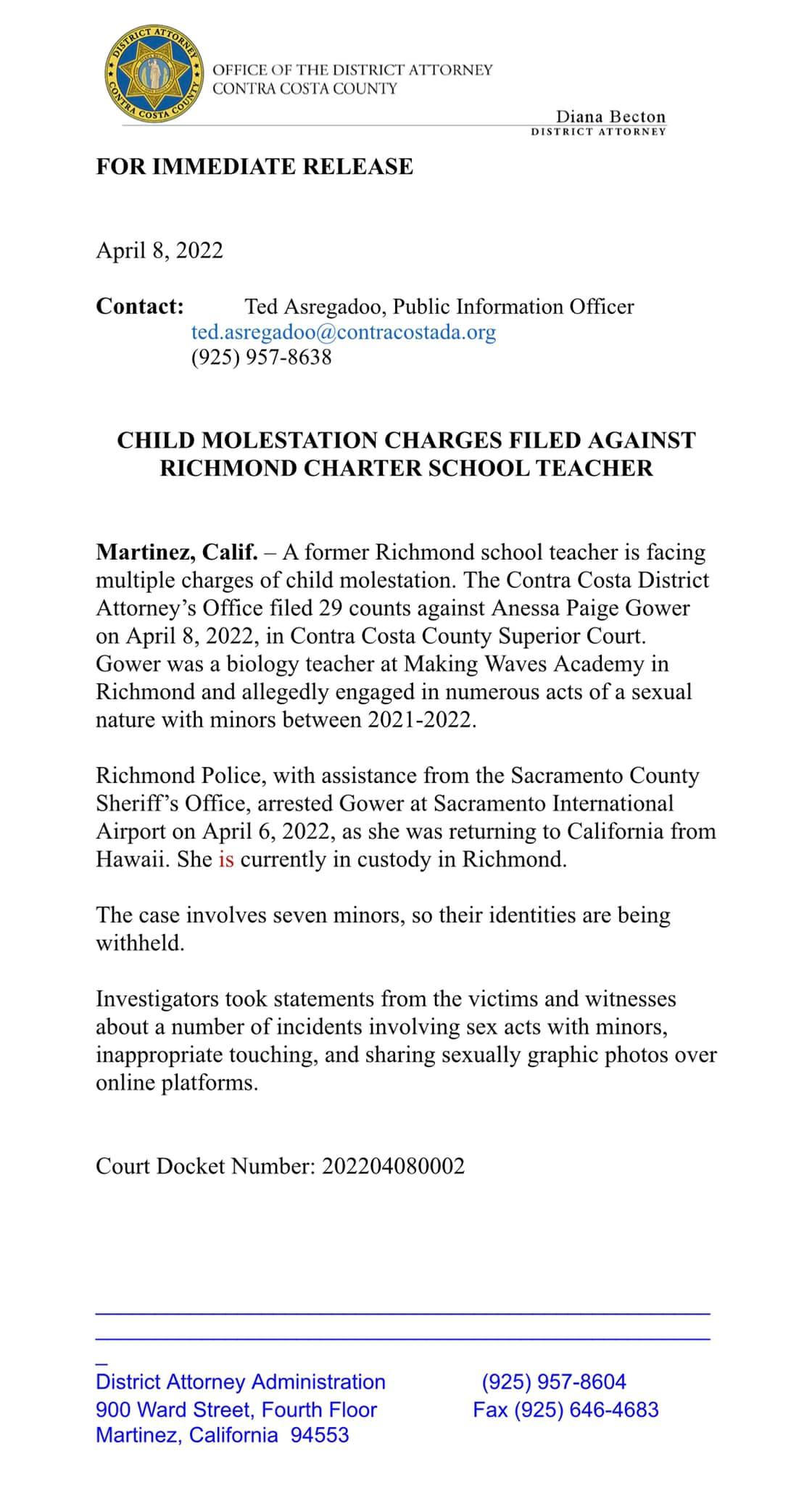 “During the course of an investigation into allegations that one of our teachers violated school policy, we learned of additional highly concerning allegations involving that teacher’s conduct. We immediately shared that information with authorities who are reviewing the matter. That teacher is no longer employed by Making Waves Academy and we have reached out to parents, students and faculty to provide support where it might be needed. At this time we can make no further comment,” the school’s statement read.

Gower is charged with crimes that include unlawful sexual intercourse, sodomy of someone under 16, sodomy of someone under 18, child molesting, lewd acts upon a child and sending minors lewd material, according to online court records. All but four of the 29 charges lodged against her in Superior Court are felonies. The dates of her alleged offenses occurred between December 23, 2021 and February 15, according to her charging documents.

The former teacher is scheduled to be arraigned on the criminal complaint at 1:35 p.m. Monday before Judge Rebecca Hardie.

Don't forget to like SonsOfLibertyMedia.com on Facebook and Twitter.
The opinions expressed in each article are the opinions of the author alone and do not necessarily reflect those of SonsOfLibertyMedia.com.
Previous Post:
Depopulation: From Rockefeller To Kissinger To Klaus Schwab
Next Post:
The Earth Only Has A 3 Month Supply Of Food – If Production Stops Humanity Has Nothing To Eat “In 90 Days”