The Cancer that is Public Health

The idea of public health, as if government actually should have any authority in that area, is one of the chief means of tyranny and democide.  We have seen it throughout history, and the CONvid-1984 is just the latest manifestation of this issue.

The experimental COVID shots are being revealed for what they actually are every, single day:  bioweapons.  Forcing them onto the unsuspecting public as “safe and effective” when they know it is not is immoral and unethical.

Rep. Thomas Massie pointed this out recently by pointing to the CDC’s own statements.

CDC admits mRNA shots can cause myocarditis and blot clots. Also admits natural immunity is real. And concedes that the shots don’t prevent infection or spread of the virus.

Therefore COVID “vaccine” mandates are immoral and unethical even according to govt. End all of them now. pic.twitter.com/c6x3ndKnm4

David Bell writes on The Cancer that is Public Health at Brownstone Institute.

Sometimes an institution or movement turns on the society that supports it, harming the whole for its own benefit. A public bureaucracy can forget its underlying purpose and focus on perpetuating itself, or an organization comes to believe that the rest of society owes it special privileges. When an organ within the body of society becomes thus corrupted, and proves itself unwilling to reform, society must excise the diseased tissue before it spreads.

Cancer and its causes

Cancer starts when cells within an organ begin to operate outside the strictures and rules that the body’s cells were programmed to follow. This can be triggered by environmental factors such as chemicals, radiation, or viral infections. It can also occur due to structural errors in the DNA that determine the body’s growth and function.

Immune mechanisms often control and eliminate early cancerous change, with the person remaining unaware that there was even a threat. Sometimes however, the cancerous change is too great for these inbuilt checks to overcome. Its growth is beyond what the body was designed to address, or the body has become so sickened by age, attack or neglect that it can no longer mount an adequate defense.

As a cancer grows, it slowly corrupts the organ it arose within, impairing or changing its function. Demanding more nourishment to support its own rapid growth, it saps the body’s ability to support the rest of its billions of cells. In time the whole body deteriorates, though the cancer continues to grow and extract nourishment to the end, effectively repurposing the body solely towards its own support.

Death may be averted by removing the offending cancer, or even the entire organ from which it arose. But if the organ is vital to survival or the cancer has infiltrated other vital organs, excision is not possible. Sometimes the cancer may be poisoned or killed with radiation or immunotherapy without killing the entire body. But if it cannot be so dealt with, it takes the entire body down with it. This is a relatively common way to die.

Society is in many ways like the human body. Its various organs perform their functions to support the whole, all interdependent for survival. Corruption of one organ will, if left unchecked, corrupt the whole body. Most societal organs have rules that keep them in line with society’s needs. When external influences poison or degrade them and these rules are broken, the organ grows to the detriment of the whole. If society is healthy, it may be able to reform or replace the offending organ. If it is not, or if the corruption has infiltrated too deeply, society will become increasingly sick as its lifeblood is sucked away, and in time it may die.

A cancer on society

The international public health sector comprises the World Health Organization (WHO), a growing bevy of other international health agencies and numerous non-governmental organizations and foundations. Ostensibly its role is to support global society in maintaining overall health. By WHO’s definition, health is the ‘physical, mental and social wellbeing’ of all people, in equal measure. For reasons of promoting equality and human rights, the sector focuses on populations in low-income countries where life expectancies are lower and resources most limited. Various rules on conflict of interest, together with the traditional unprofitability of poor people’s healthcare, had once kept the private sector mostly uninvolved and uninterested. WHO’s lifeblood funding was restricted to assessed national contributions of its Member States.

Over the past two decades, the growth of mass vaccination has provided a viable way to extract profit from the healthcare of these low-income populations. Reflecting this, private interests and corporations have become keen to fund WHO’s work. These sources follow a ‘directed funding’ model through which they specify how and where their sponsorship will be used. Private money and corporate direction also heavily influence new organizations set up in parallel including Gavi and CEPI, focused on supplying commodities from which these sponsors profit. This has changed international health from a horizontal, country- and community-driven approach to a vertically-driven commodity-based model.

While the international public health sector is still heavily dependent on taxpayer funding, the funding of corporations and their investors has won them great influence over this increasingly commoditized agenda. Public funding thereby shifts wealth from the average taxpayer to the wealthy who have invested in these goods. An organ nourished by and designed to support the whole has been repurposed by these external influences into acting like a cancer on society, still fed by the body but directed to its own benefit.

If this cancer analogy seems a stretch when applied to the ‘humanitarian’ sector, it is instructive to review recent history. In 2019, after a structured process laid out for guideline development, WHO published their guidelines for pandemic influenza. These specifically state that contact tracing, border closures and quarantining of well individuals should not occur during an established pandemic. At most, sick people could be confined at home for 7-10 days. School closures, if used, should be short-term. Restrictive measures, as WHO noted, would not significantly reduce mortality but would disproportionately harm low-income people and raise major ethical and human rights concerns.

A few months after publishing these guidelines, senior WHO executives recommended restrictive measures far beyond those that their own guidelines had warned against. To appreciate the gravity of the harms inflicted on the billions of people in low-income countries, we must understand that those orchestrating them knew that these populations were at very low risk from Covid-19 itself.

The massive skewing of Covid mortality towards old age was published in the Lancet in early 2020. More than half of the 1.3 billion people in sub-Saharan Africa are under 20 years of age and therefore at near-zero risk, whilst less than 1% are over 75 years. The average age of Covid-associated deaths in Western countries is about 80 years.

The WHO, CEPI, Gavi and other public health organizations knew that rapid health service access and good nutrition are fundamental to reducing child mortality. They knew that infant mortality in low-income countries is strongly tied to gross domestic product (GDP) and therefore harming economies would kill millions (which it is, with UNICEF noting over 200,000 lockdown deaths in South Asia in 2020 alone).

In advocating for measures to restrict health service access and disrupt supply lines, they knowingly caused an immediate and sustained increase in malaria, pneumonia and other acute infectious disease. By restricting access to tuberculosis and HIV care, the death rate of those already infected would increase whilst also promoting transmission, locking in greater future mortality. These diseases kill at a far younger average age than Covid.

Recommendations to close workplaces in cities left millions of workers in the same crowded living conditions as before, but with no income to buy food and medicine for their families. Closure of markets further reduced access to nutrition, whilst also reducing farm earnings. Knowing the importance of tourism to the service and retail industries that support millions of women’s education and independence, advocacy to block international travel further impoverished these people. 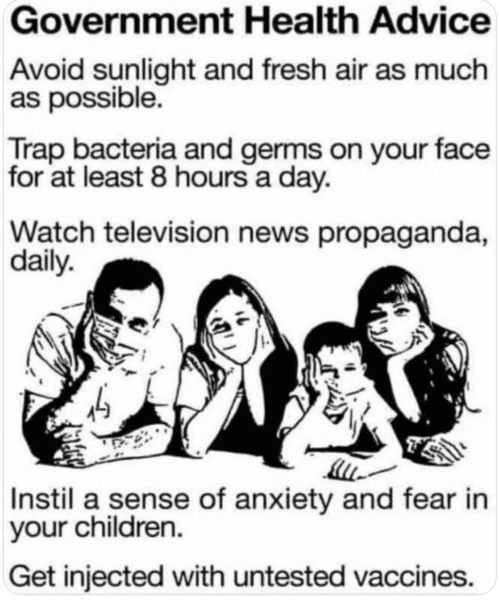 Don't forget to like SonsOfLibertyMedia.com on Facebook and Twitter.
The opinions expressed in each article are the opinions of the author alone and do not necessarily reflect those of SonsOfLibertyMedia.com.
Previous Post:
Health Experts Now Confirm What We Warned: High Numbers Of Myocarditis Brought On By Deadly Experimental COVID Shots, Not Infections
Next Post:
The United States Is Insolvent

Black Americans Who Have Never Been Enslaved Are Calling For Reparations But Is There Another Group Of Americans More Deserving?
February 3rd, 2023 Conservative Firing Line