In a previous article, I provided documents that demonstrate that Lee County Sheriff Carmine Marceno does not appear to have ever met the state’s lawful requirements to have ever been a police officer in Florida.  These have been provided to local media in Southwest Florida, as well as the Florida Department of Law Enforcement (FDLE), the governor’s office, the Florida Sheriffs Association, and the attorney general with no action taken and no comment.  However, in this article, I’m going to point out the law and how Marceno never met the simple requirements of an out of state police officer seeking to become a police officer in Florida.

According to the Florida Department of Law Enforcement (FDLE):

The Equivalency of Training (EOT) process is for Out-of-State Federal Officers and previously certified Florida officers with a four year or more break-in-service pursuant to section 943.131(2), Florida Statutes and Florida Administrative Code (F.A.C.) 11B-35.009(4)(5).

The EOT allows an officer to be exempt from having to complete the full basic recruit academy.

You may be eligible for an exemption from the full basic training requirements if you were an officer in another state or with the federal government and meet the following requirements:

First, take a look at the definitions that legislators used for writing a very specific law regarding time served.

(1) Definitions. For the purpose of this rule section, the following definitions shall apply:

(a) “Employing agency” means any agency authorized by law to employ or appoint officers pursuant to section 943.10(4), F.S.

(b) “Comparable basic recruit training program in another state or for the federal government,” means any successfully completed sworn officer training course or courses, irrespective of the completion date, which when viewed together include all the primary training topics pursuant to subsection (3) of this rule section, for the discipline in which the applicant is seeking an exemption, pursuant to section 943.131(2), F.S. Commission-approved Basic Recruit Training Courses may be substituted for courses not included in basic level training.

(c) “Another state” means one or more of the United States or its territories, or any combination thereof, with the exception of the State of Florida.

(e) “Full time” means any employed or appointed status in which a normal work week consists of forty or more on-duty hours, exclusive of overtime, holidays, regular days off, leave, or other authorized or ordered absence from work.

(f) “Sworn officer” means an individual whose work experience, as required in this rule section, meets the definition of a law enforcement, correctional, and correctional probation officer pursuant to sections 943.10(1)-(3), F.S.

(g) “At least one year” means a time period of twelve months sworn experience that shall have occurred at no more than two criminal justice agencies over a period not to exceed eighteen months as a full-time sworn officer in a specified discipline, excluding periods during which an individual was enrolled in or attending basic recruit training.

(h) Pursuant to section 943.1395(3), F.S., and subsection 11B-27.0021(11), F.A.C., an “Inactive Florida Officer” means an individual who has met the certification and employment requirements of section 943.13, F.S., and has not been employed as an officer in the discipline for which the individual was a Florida certified officer for a period of four to eight years.

Then there are requirements for being exempt from attending a police academy in Florida that would result in roughly 770 hours of training if one is from out of state and fails to meet the full-time work.

(2) An individual who applies for certification as a Florida officer shall qualify for exemption from completing a Commission-approved Basic Recruit Training Program if the applicant has:

(b) Prior service as a full-time sworn officer in another state or the Federal Government for at least one year, pursuant to paragraph (1)(g) of this rule section, in the criminal justice discipline for which the individual is requesting an exemption. There shall be no more than an 8-year break in employment, which is measured from the separation date of the most recent qualifying employment to the time a complete application is submitted for an exemption under this rule section. The twelve months sworn experience shall have occurred at no more than two criminal justice agencies over a period not to exceed eighteen months as a full-time sworn officer in the discipline for which an exemption is being requested.

Here are his time sheets from his time in New York when he worked for Suffolk County Dept. of Parks.  Though he has promoted himself to reporters and the women he has allegedly taken advantage of as working for the New York Police Department, The Washington Standard has confirmed with NYPD human resources that he has never worked for them.

You will notice that Marceno did work for the Suffolk County Dept. of Parks during 1998 and 1999.  He traveled to Florida in 1999 and was employed by Naples Police Department against the law stated above, having never completed 12 months of full-time work as a sworn officer in New York.

He was also allowed to that a test of exemption from the Florida Police Academy called an Equivalency of Training, which he was not even supposed to be given unless he had met the time requirements.  He failed that not once, but twice in 2000.  Below is the documentation of that failure, along with his training, which I’ll reference in a moment.

Notice that he did pass in October of 2002, which allowed for him to be certified.  However, he had still not met the time requirements, and there is nothing stating where he completed another preparation course regarding the courses he failed.

There’s something else that is interesting.  In 1999, John Brown of the Police Applicant Screening Service (PASS), who has long since retired, signed the form to FDLE stating that Marceno had completed 12 months of full-time service.  He had not.  In referencing the documents above and the law, which demands 12 months of full time sworn officer duty in a time period of 18 months, here’s where Marceno stood with what New York refers to as “full time” work, even though his job was part-time/ seasonal. 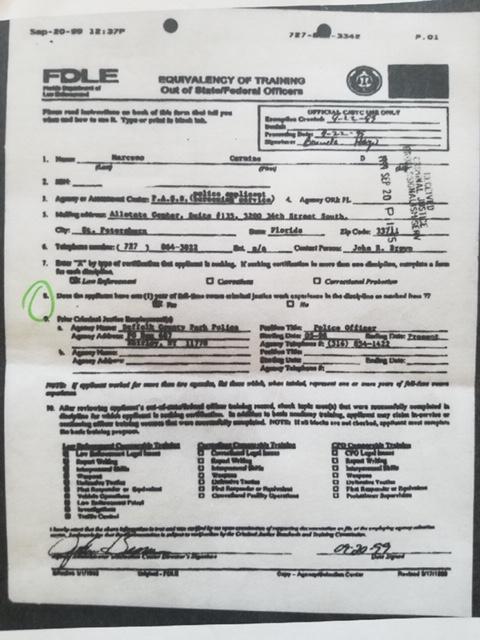 In fact, at that time this was signed, September of 1999, Marceno had only worked for roughly a year for Suffolk County.  During that time, he was only seasonal and though 37.5 hours is considered full time in New York (with .5 hours given for lunch), he only worked 20 weeks at or above those hours.  That’s only 5 months.

Two years later, he returns to Suffolk County and from March 23, 2001 to July 3, 2002, he only worked another 20 weeks during that time at or above those hours.

So, to be clear, in the span of five years, Carmine Marceno worked only 10 months as “full time” in a “part time/seasonal” job as what is, in essence, a park ranger job.

Note the FDLE global profile which was pulled in March 2019.

Marceno’s last training is listed in 2009.  He has absolutely no firearms qualifications listed at all.  This has to be done every single year.  Other employees’ records clearly show this.

Additionally, note that his mandatory certification was accomplished in December 2018, just after he was made sheriff.

Even more telling is that an internal memo from Naples Police Department stated that he had to retake the parts of the exam preparation course that he failed and then take the equivalency test within 180 days (six months) of finishing the course. 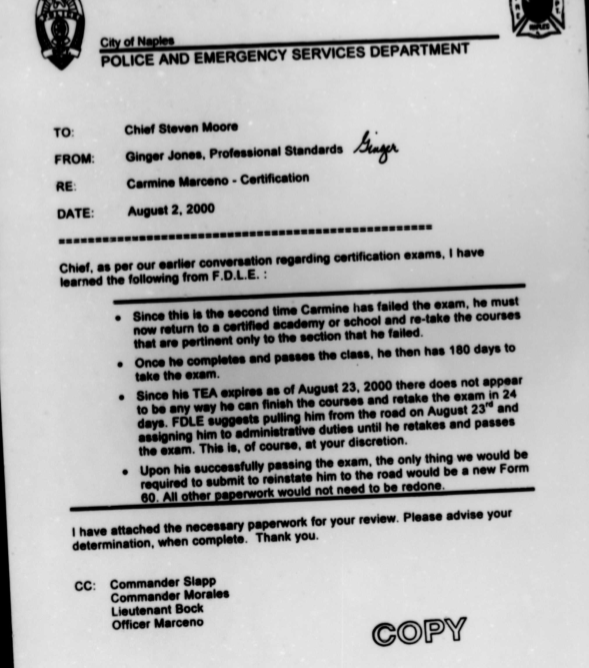 More than two years later, he passes the exam and is certified in March 2003.  However, FDLE only records his 200 completion of the course prior to his two failures.

Additionally, FDLE has stated that they do not retain an officer’s certification, but rather the place of employment retains it.

Neither Collier County Sheriff’s Office, which Marceno worked at for ten years, nor Lee County, which he is currently the appointed sheriff and worked at for 6 years claims to have his certification per a Freedom Of Information Act submitted by a former sheriff’s deputy with LCSO.

Just keep this in mind:

Just committing this crime is a third-degree felony which is punishable up to 5 years in prison and a $5,000 fine. This crime is a level 2 out of 10 under the Florida Criminal Punishment Code.

If the defendant impersonated an officer during the commission of a felony, then the crime is a second-degree felony which is punishable up to 15 years in prison and a $10,000 fine.

If during the felony someone is killed or injured, the crime is a first-degree felony punishable up to 30 years in prison and $10,000 fine.

Marceno wanted his unborn child to be murdered in abortion, but the mother refused.  Now, the child is dead and the mother’s life is threatened.

And those in authority and the media in Southwest Florida remain silent while “Republicans” in the area put their full support behind a fraud.

Previous articles in this series:

Don't forget to like SonsOfLibertyMedia.com on Facebook and Twitter.
The opinions expressed in each article are the opinions of the author alone and do not necessarily reflect those of SonsOfLibertyMedia.com.
Previous Post:
Muslim Dr. Mengeles: Doctor & Pharmacist Were Nazi-Style Torturers For Islamic State
Next Post:
Texas: Democrat Mayor & His Wife Arrested For Massive Voter Fraud