We’ve seen it in the united States with federal land grabs in violation of the Constitution’s provisions, some of which took center stage during the Bundy Ranch standoff and the Oregon protests just a few years ago that ended in the murder of LaVoy Finicum and the exposing of the crimes of our own government against the people they were to serve in order to steal their resources from the land just like they are doing in foreign countries.  However, what is occurring now is far more than just land and it’s not just happening in the US, but across the earth.

On top of that, consider how much land in the US has now been purchased by foreign interests.  It’s astounding!

Meleni Aldridge and Melissa Smith have the story at Children’s Health Defense.

Have you ever heard of a natural asset company or NAC in short (and we’re not referring here to the glutathione precursor, N-acetyl-cysteine)? It won’t surprise us if you haven’t.

We’ve only recently come across the term ourselves and we’re coming to the view that it may facilitate the biggest corporate land grab in recent history. That’s if we, the people, don’t put a stop to it.

If you believe that nature should never become a commodity that’s bought and sold by a powerful few, read on. The fact the moneyed minority feel that they have a right to effectively barcode nature is quite breathtaking in its greed and arrogance.

Though not all that surprising when you look at what’s been happening over the past two years. We really are being called to “clean house” on so many levels.

We’ve created an infographic (see below) to summarize the plans for the exploitation of what’s now being termed, “nature’s economy.”

You can see at a glance the price tag that’s been placed on her head and why suddenly traditional philanthropy — based on giving — has been declared “a total failure” and is being replaced by “investment philanthropy.”

You’ll be familiar with the names involved in kicking off this new kind of non-giving (aka taking) philanthropy. If you were wondering how philanthropic investing could be declared a failure, look no further than André Hoffmann, the vice-chairman of pharmaceutical giant, Roche.

Please download the PDF with clickable links, or as an image and share as far and wide as you can. This is a message that needs to take flight rapidly.

What is an NAC?

In September 2021 the New York Stock Exchange quietly announced that it had created a new asset class with a listing, “To preserve and restore the natural assets that ultimately underpin the ability for there to be life on Earth.”

It looks both innocent and protective. Who doesn’t want to preserve and restore the planetary resources on which we all depend?

However, the subtext is that corporations who fit into this asset class, “natural asset company,” get to maintain, manage and develop the natural resources on a given piece of land.

It’s effectively a fast track to commodifying nature’s natural resources. Less about protecting nature and more about making money through “nature’s economy” — which has been attributed a tantalizing price tag. 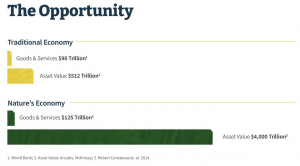 “Our hope is that owning a natural asset company is going to be a way that an increasingly broad range of investors have the ability to invest in something that’s intrinsically valuable, but, up to this point, was really excluded from the financial markets.” — The Intrinsic Exchange

The stock exchange recently unveiled a partnership that’s been two years in the making with the Intrinsic Exchange Group (IEG) to open up investment opportunities in what it calls “nature’s economy.” IEG describes itself as a”‘pioneering natural asset company.”

One of its key investors is the Rockefeller Foundation.

The commoditization of nature is justified as being driven by the protection of natural resources. But scratch beneath the surface and the greed and avarice is clear to see.

Researchers back in 2012 highlighted the danger of “green grabbing” and cited the appropriation of land and resources using “green” credentials to justify the land grab as an emerging process of deep and growing significance.

They go as far to say that green grabbing builds on well-known histories of colonial and neo-colonial resource alienation in the name of the environment.

It’s absolutely no surprise then to see the World Economic Forum getting in on the act with its Nature Risk Rising report in 2020. The subtitle is “Why the crisis engulfing Nature matters for business and the economy” and notes, in its second report, The Future of Nature and Business, that, “A new Nature economy could generate up to $10.1 trillion in annual business value and create 395 million jobs by 2030”.

Don’t be fooled by how benevolent and humanitarian it all seems.

Mark Wilson in his 2013 paper, highlights how the so-called “green economy” fails to address five fundamental problems and, thus, has the potential to increase environmental degradation and cause even greater social inequity than we see today:

In addition, in 2022, we echo the following reasons why NACs are likely to be more tempted to act against nature than for it:

Don't forget to like SonsOfLibertyMedia.com on Facebook and Twitter.
The opinions expressed in each article are the opinions of the author alone and do not necessarily reflect those of SonsOfLibertyMedia.com.
Previous Post:
Wall Street Analyst: COVID Shots Are “Greatest Fraud In History”
Next Post:
More Than 100 Disney Employees & Former Judge Busted In Human Trafficking Sting (Video)