“People should know the facts before subjecting themselves to be an experimental guinea pig.”

What is of interest is as to how the mainstream media is doing their best to cover-up for those who are responsible for this criminal conspiracy taking place on a global basis (John 8:44; Isaiah 28:18).

Mr. Michael Mitchell received his first experimental Sinovac Coronavac “inactivated virus” injection on February 22, according to his Facebook page. Coronavac is used pretty much everywhere (including Mexico and the Philippines) except the United States, Russia and Western Europe. He received the second injection on March 20. He reported no apparent adverse effects. But Mr. Mitchell and a friend immediately wondered if the China-made Coronavac injections would suffice for international travel. 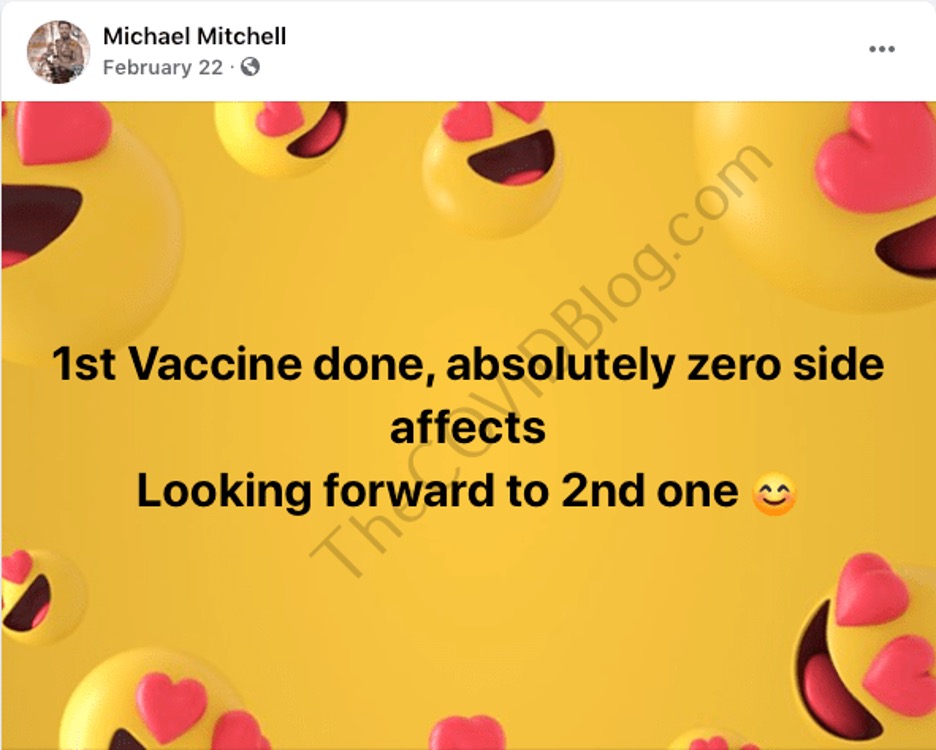 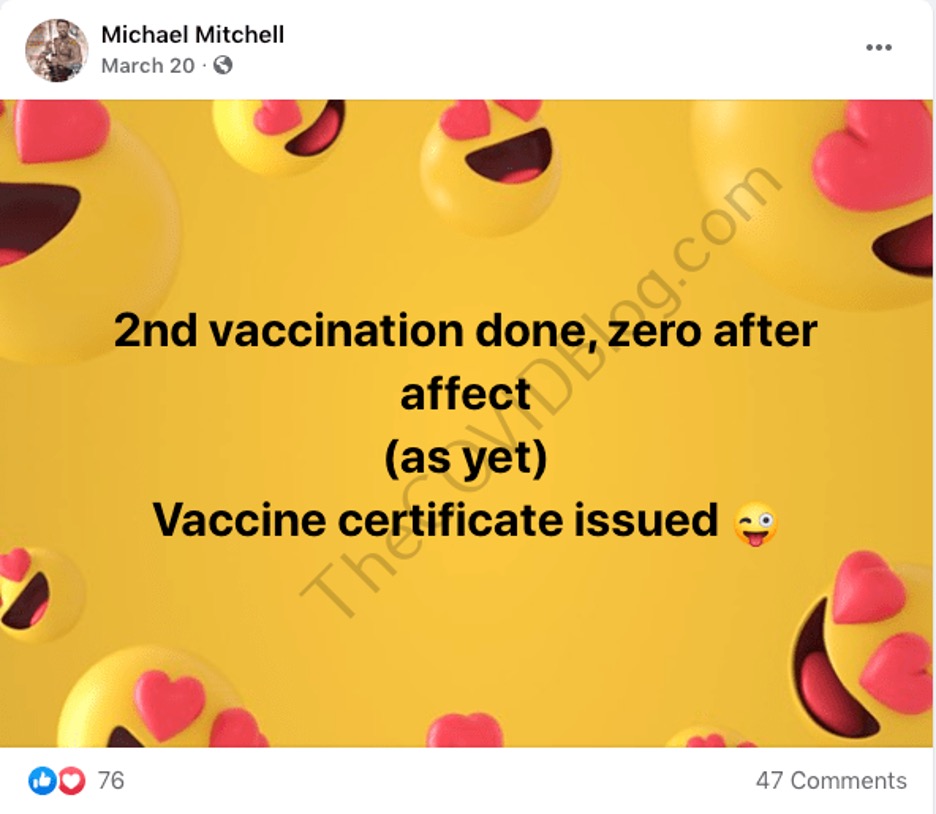 Virtue signaling commences
Note that Mr. Mitchell’s entire Facebook page was scrubbed of all posts sometime this past weekend. Only one post remains – his wedding announcement from 2013. But the virtue signaling was very strong after the second injection. Mr. Mitchell posted an image of Charlie Brown on March 31 that said “Good grief, just wear the mask.” 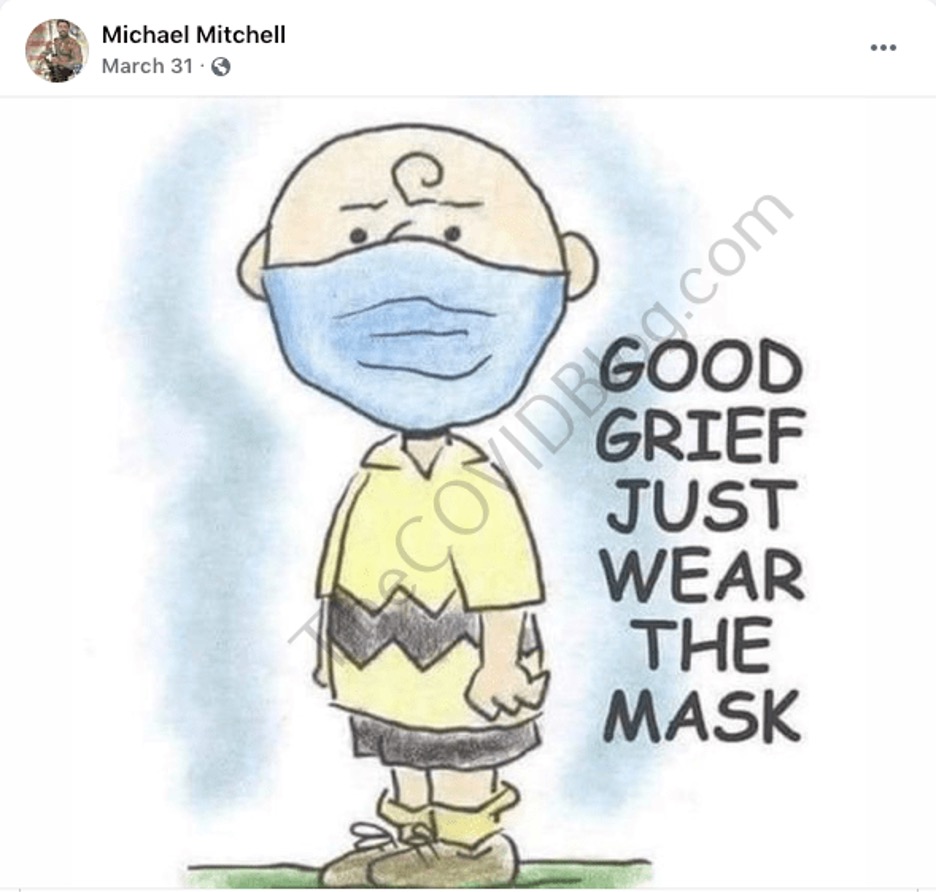 He wrote on April 22 that COVID cases were up in Turkey because of “dimwits that don’t wear masks and social distance.” 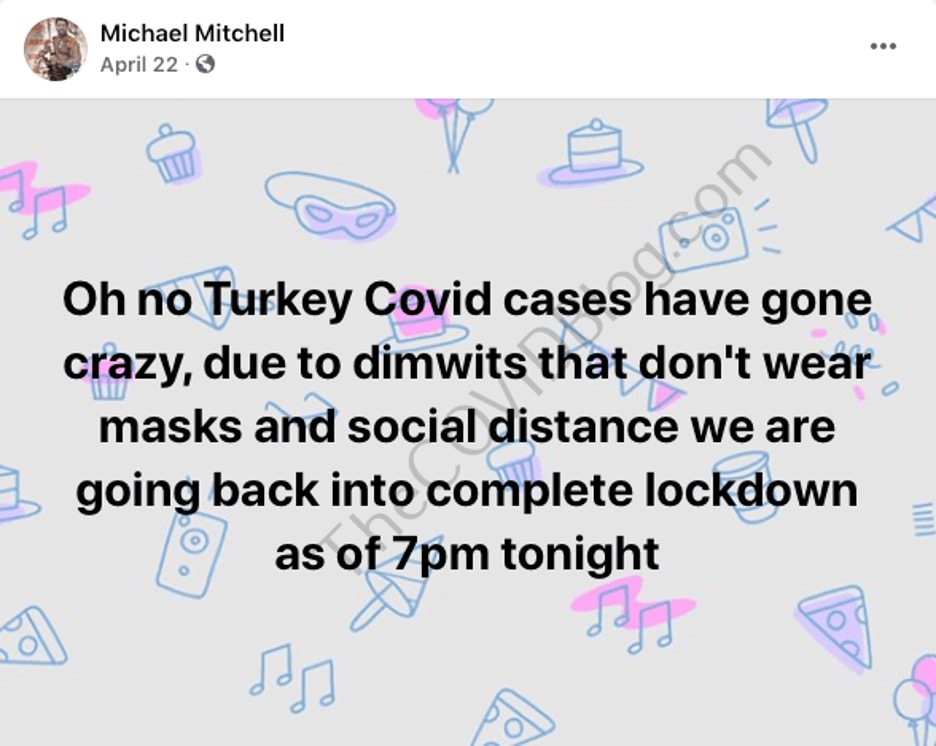 He posted the proverbial “fully vaccinated” banner on his profile photo on May 2. His May 5 update responded to people telling him he should not have received the experimental injections. Mr. Mitchell posted disinformation, saying that only 0.005% of all recipients of experimental injections suffered adverse reactions. 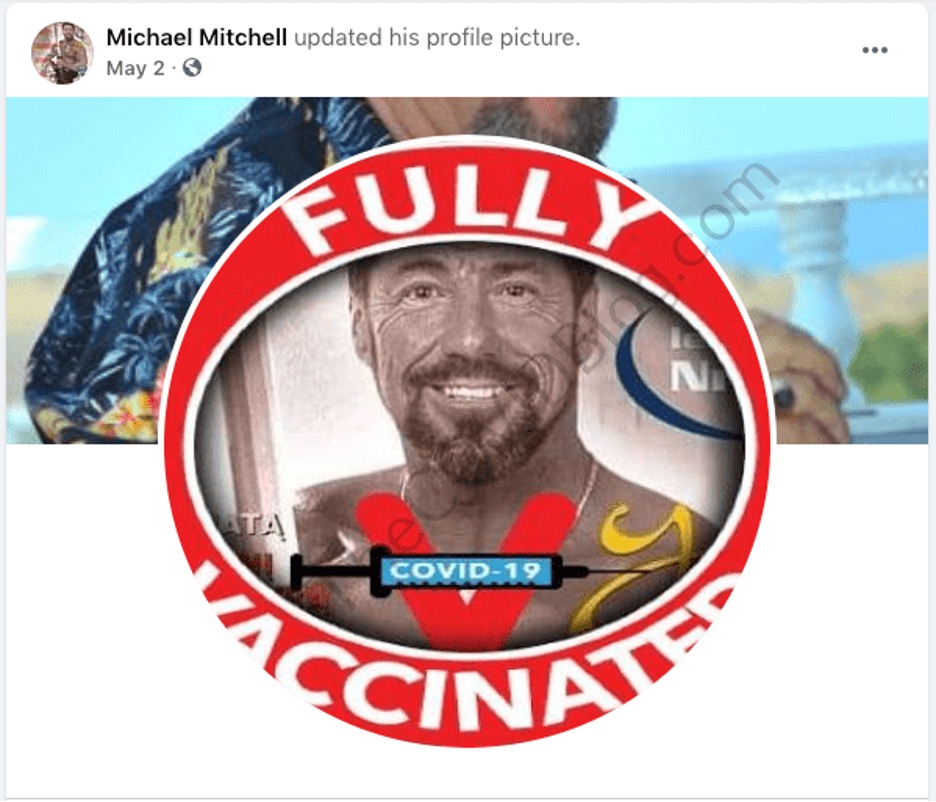 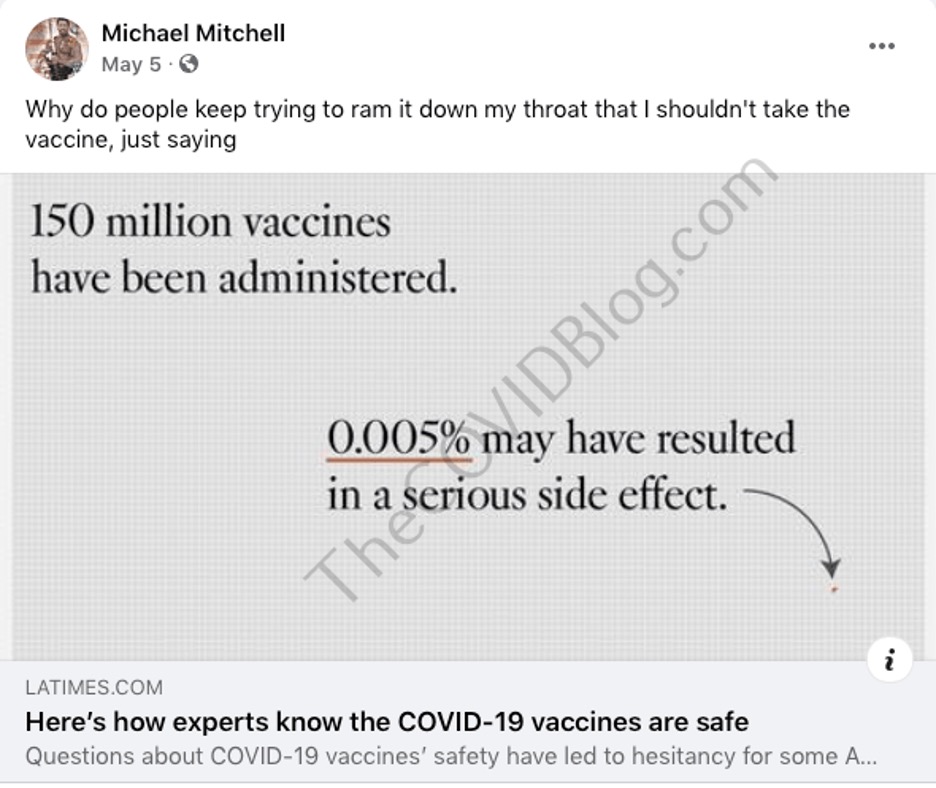 Mr. Mitchell appeared to celebrate what he considered good news on June 2 – that the World Health Organization (WHO) apparently approved Sinovac as a legitimate “vaccine. 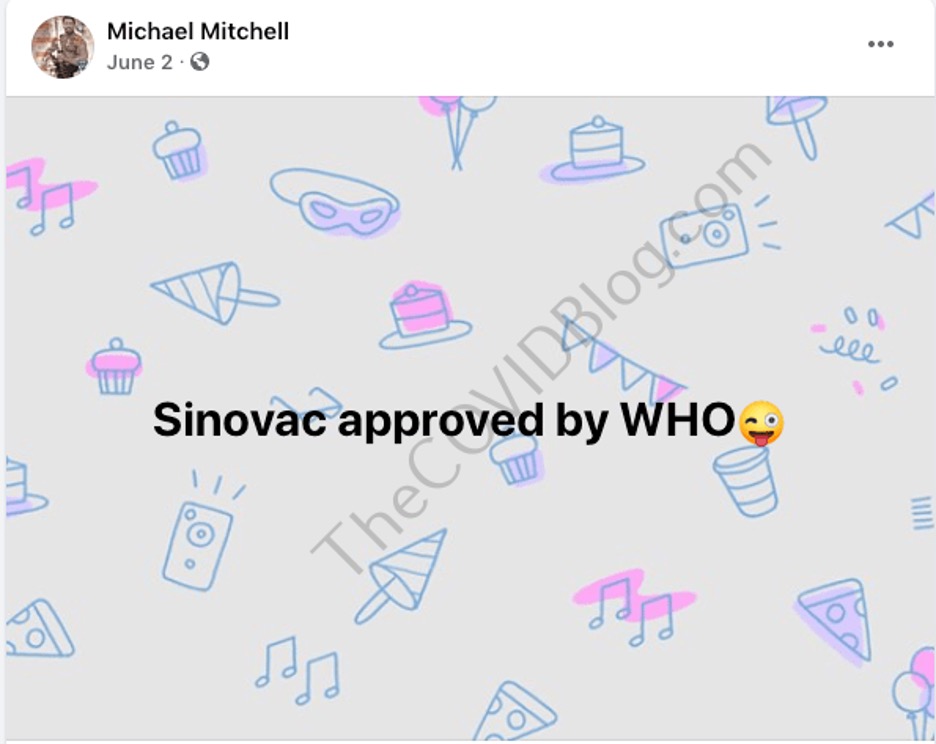 The Sinovac approval was not enough to satisfy Mr. Mitchell. He announced on July 16 that he received a “third jab,” the experimental Pfizer mRNA injection. He also admitted being a guinea pig for pharmaceutical companies. 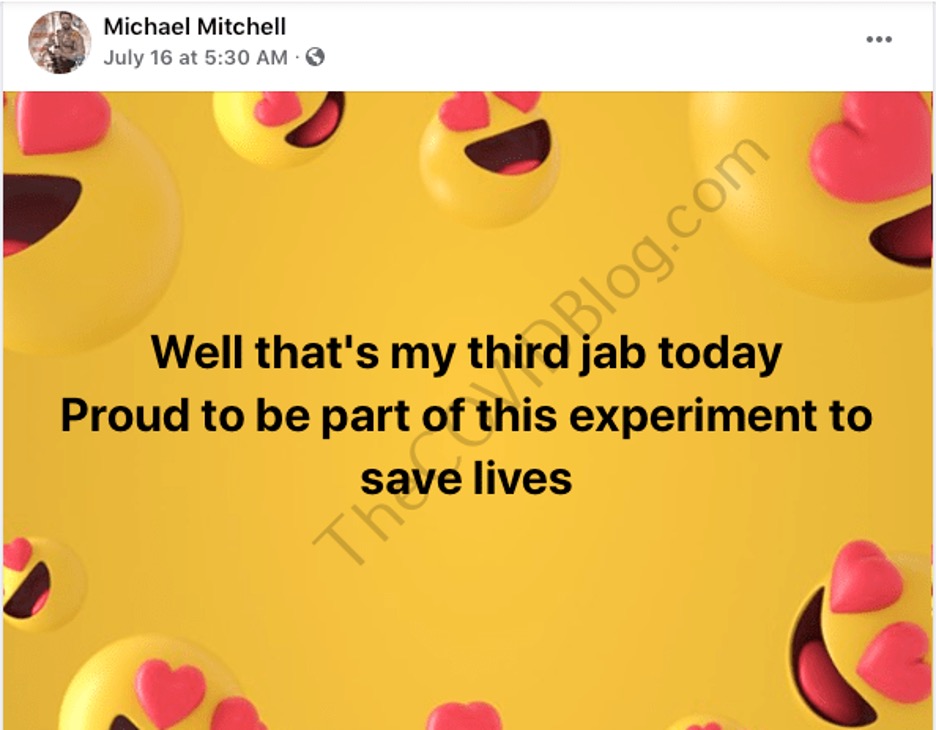 Five days later, he posted a lengthy update trying to justify his own behaviors and actions. He’d been wearing masks since last year to be “considerate to others for the common good.”
Mr. Mitchell said, among other things, that wearing a mask isn’t a sign of weakness, but instead shows he is “caring and responsible.” Several of his friends agreed and commented accordingly. 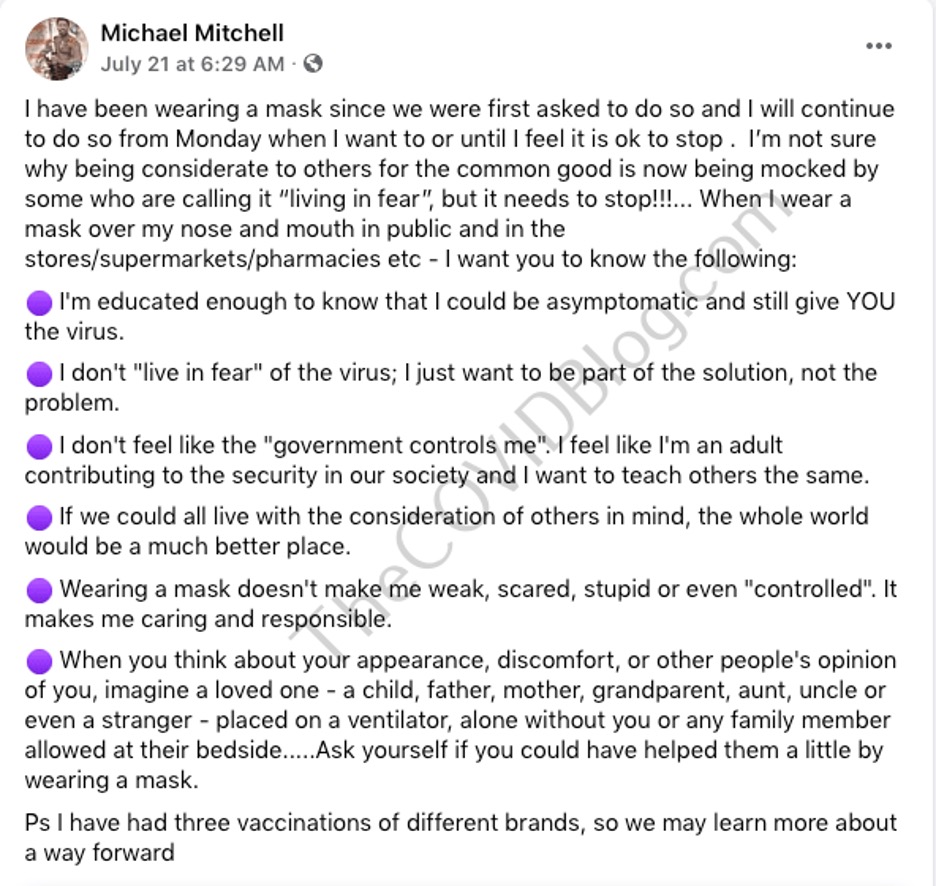 The final sentence in the July 21 post reads, “P.S. I have had three vaccinations of different brands, so we may learn more about a way forward.”
Mr. Mitchell died the next day, Friday, July 22 in a marina cabin near his house boat. The marina manager checked on the actor after he was inside the cabin for an unusually long time. Mr. Mitchell was found unresponsive, lying on the floor.
Some media reports say it was “natural causes.” Others are saying heart attack. Mr. Mitchell was best known for his acting roles in the films “Gladiator,” “Braveheart,” and “City of Hell.” He also won several bodybuilding competitions.

Then, we have propaganda outlet FOX News come behind the facts in doing their best to cover them up, namely through omission and tell their readers and watchers that he died from natural causes.  Nothing could be further from the truth (Exodus 20:16)!

The Scottish actor was a five-time World Fitness Federation champion.

Mike Mitchell, an actor and bodybuilder who starred in “Gladiator” and “Braveheart,” has died. He was 65.

A rep for Mitchell told TMZ he died on Friday while on a boat in Turkey. His family said his death was due to natural causes but didn’t provide any additional details.

In a statement, Mitchell’s rep remembered him as an actor, friend and “honest person.”

How many times do Americans need to be lied to before they figure out that the lies they’ve been told?

“ And in them is fulfilled the prophecy of Esaias, which saith, By hearing ye shall hear, and shall not understand; and seeing ye shall see, and shall not perceive: For this people’s heart is waxed gross, and their ears are dull of hearing, and their eyes they have closed; lest at any time they should see with their eyes and hear with their ears, and should understand with their heart, and should be converted, and I should heal them.” -Matthew 13:14-15

Don't forget to like SonsOfLibertyMedia.com on Facebook and Twitter.
The opinions expressed in each article are the opinions of the author alone and do not necessarily reflect those of SonsOfLibertyMedia.com.
Previous Post:
The Tyrants Are At Work In The US – The People Are Going To Have To Push Back
Next Post:
Police State Ramps Up In Sydney, Australia As Order Followers “Crackdown” On Others