Uh oh – here we go again.  Do you remember the subprime mortgage meltdown during the last financial crisis?  Well, now a similar thing is happening with auto loans.  The auto industry has been doing better than many other areas of the economy in recent years, but this “mini-boom” was fueled in large part by customers with subprime credit.  According to Equifax, an astounding 23.5 percent of all new auto loans were made to subprime borrowers in 2015.  At this point, there is a total of somewhere around $200 billion in subprime auto loans floating around out there, and many of these loans have been “repackaged” and sold to investors.  I know – all of this sounds a little too close for comfort to what happened with subprime mortgages the last time around.  We never seem to learn from our mistakes, and a lot of investors are going to end up paying the price.

Everything would be fine if the number of subprime borrowers not making their payments was extremely low.  And that was true for a while, but now delinquency rates and default rates are rising to levels that we haven’t seen since the last recession.  The following comes from Money.com…

People, especially those with shaky credit, are having a tougher time than usual making their car payments.

According to Bloomberg, almost 5% of subprime car loans that were bundled into securities and sold to investors are delinquent, and the default rate is even higher than that. (Depending on who’s counting, delinquency is up to three or four months behind in payments; default is what happens after that). At just over 12% in January, the default rate jumped one entire percentage point in just a month. Both delinquency and default rates are now the highest they’ve been since 2010, when the ripple effects of the recession still weighed heavily on many Americans’ finances.

The chart below was posted by David Stockman, and it shows how the delinquency rate for subprime borrowers has hit the highest level since 2009.  In fact, we are not too far away from totally smashing through the previous highs that were set during the last crisis… 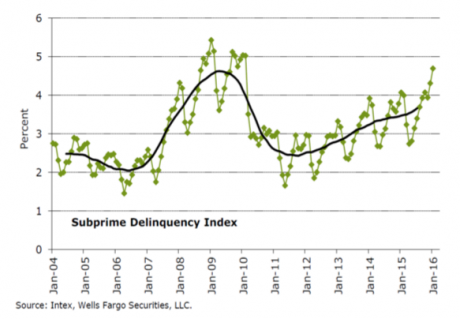 The most disturbing thing to me is that many of these loans are being “repackaged” and sold off to investors as “solid investments”.  The following description of what has been happening comes from Wolf Richter…

The business of “repackaging” these loans, including subprime and deep-subprime loans, into asset backed securities has also been booming. These ABS are structured with different tranches, so that the highest tranches – the last ones to absorb any losses – can be stamped with high credit ratings and offloaded to bond mutual funds designed for retail investors.

Deep-subprime borrowers are high-risk. Typically they have credit scores below 550. To make it worth everyone’s while, they get stuffed into loans often with interest rates above 20%. To make payments even remotely possible at these rates, terms are often stretched to 84 months. Borrowers are typically upside down in their vehicle: the negative equity of their trade-in, along with title, taxes, and license fees, and a hefty dealer profit are rolled into the loan. When the lender repossesses the vehicle, losses add up in a hurry.

It almost makes you want to tear your hair out.

This is exactly the kind of thing that caused so much chaos with subprime mortgages.

When will we ever learn?

Meanwhile, we continue to get even more numbers that indicate that a substantial economic slowdown has already begun…

We just got the clearest sign yet that something is wrong with the US economy.

Markit Economics’ monthly flash services purchasing manager’s index, a preliminary reading on the sector, fell into contraction for the first time in over two years.

The tentative February index was reported Wednesday at 49.8.

Statistic after statistic is telling us that a new recessionis already here.  And of course some would argue that the last recession never actually ended.  According to John Williams of shadowstats.com, the U.S. economy has continually been in contraction mode since 2005.

If we do not learn from history, we are doomed to repeat it.  All over the world, “non-performing loans” are starting to become a major problem, and already some financial institutions are starting to get tighter with credit.

Deflationary forces are on the rise, and most global central banks are just about out of ammunition at this point.

Everyone knew that the global debt bubble could not keep expanding much faster than the overall rate of economic growth forever.

It was only a matter of time until the bubble burst.

Now we can see signs of crisis popping up all around us, and things are only going to get worse in the months ahead…

Article reposted with permission from The Econonic Collapse Blog.

Don't forget to like SonsOfLibertyMedia.com on Facebook, Google+, & Twitter.
The opinions expressed in each article are the opinions of the author alone and do not necessarily reflect those of SonsOfLibertyMedia.com.
Previous Post:
Trump Has Already Destroyed the GOP
Next Post:
SETI Warns Of Parent Body That Caused Recent Meteor Shower: “Looking For A Potentially Hazardous Comet”