The Truth About Pro-Life Teens At The March For Life

Editor’s Note: The following is a combination of articles compiled by contributor Deplorable Kel, used with her permission.

On Friday, Teens from the March for Life crossed paths with the Indigenous People’s March in DC. A video has gone viral or a teen wearing a MAGA hat and an elderly Native American man standing face to face, the elderly man beating a drum in the teens face. The video shows a group of Trump supporting teens and Native Americans. The teens were called racial slurs but all seemed to keep their cool. Some of the teens danced along with the chants of the Native Americans. The boy who was face to face with the elderly man never said a word.

Multiple articles state that the teens were mocking the elderly man and that one teen chanted in his face. This is untrue.

The video below shows more of what happened than the short clips that have gone viral.

How about we just flip this entire narrative around.A group of young Catholic boys who support our President gathered peacefully to join the March for Life in D.C., where they were met by angry mob of leftist agitators from a nearby indigenous march. These leftists attempted to provoke some of the boys by getting in their space, one going as far as to beat his drum right in the face of one of the boys while loudly yelling one of his indigenous chants.But the young boys held it together, demonstrating their maturity and composure by not engaging the leftist mob, especially the one who had the agitator in his face. He did not retaliate or return his provocation, instead he stood his ground without even flinching once.These boys are an example and should be commended for the way they handled this situation. Very well done.

Then there was an update.

y now, I’m sure you’ve all seen the video of the MAGA hat wearing teens “harassing” an elderly Native American man. The problem is, it’s fake news. The teens never harassed anyone.

As I stated in a previous article:

Teens from the March for Life crossed paths with the Indigenous People’s March in DC. A video has gone viral or a teen wearing a MAGA hat and an elderly Native American man standing face to face, the elderly man beating a drum in the teens face. The video shows a group of Trump supporting teens and Native Americans. The teens were called racial slurs but all seemed to keep their cool. Some of the teens danced along with the chants of the Native Americans. The boy who was face to face with the elderly man never said a word to him.

In a video not being shown by the MSM it shows the Native American group approaching the teens and the elderly man getting into the teens face, beating the drum. The teens didn’t do anything to provoke the incident.

One of the men, who goes by Shar Yaqataz Banyamyan on Facebook, told the teens:

Why don’t ya’ll come up and ask a question, Billy? Don’t stand to the side and mock, bring ya’ll cracka ass up here and make a statement. Tell ’em come over here in the lions den instead of mocking over there. You little dirty ass crackas, your day coming, your day coming, your day coming! ‘Cause your little dusty asses wouldn’t walk down the street in a black neighborhood and walk up on nobody playing games like that. I will stick my foot in your little ass. Think it’s a game over here. And we can give a hell about your police. Aint nobody playin’ with these dusty ass crackas out here.

After threatening the teens, the men continued their rant about the white man and telling the Native Americans things like the white man has a foot in their ass. It is clear that the black hate group was there to start problems and when a problem arised with Native Americans, they then turned it onto the teens.

We aint scared of ya’ll

The Native American man replies with:

Always talking out their ass, but you wont say that to this peckerwood wearing a make America great hat again.

The black man then called the Native American man “Uncle Tomahawk” and told him he has his head up the white man’s ass.

After this, One of the black men then approaches the group of teens, trying to intimidate them.  Calling them bastards and dusty ass animals.

Another black man, not with the group, approached the men. He and one of the hateful men started arguing. Again, the hateful men attempted to turn it around and instigate this man to be angry with the teens. One of the men said:

The man arguing with the hateful men then walks away and the men go back to harassing the teens. One said:

Look at all these peckerwoods, this is what the Lord’s coming for.

One of the men walked up to the teens again and told them:

Look at all these dusty ass crackas with that racist garbage on. Look at these dirty ass crackas. Cant stand in the damn sun for more than 5 minuets.

He then called the teens future school shooters and tells them that everybody hates them.

A teen riding around on a hover board was also threatened by the men. One of the men told the teen:

But in the new kingdom this man’ll get his head cracked. He’s a white beast. His blood will  be on his skateboard. That’s what it’s going to come, that’s what’s going to happen. And guess what, it might happen sooner than you think..The Government shutdown..it’s going to trickle down to the police. You aint gonna be able to call 911 peckerwood. You aint gonna be able to call 911. You’re not going to able to. We’re gonna see the survival of the fittest next. We’re gonna see the purge. ‘Cause the purge is coming. I hope you crackas ready.

The kids ignore the men’s threats and a bit later start singing their school fight song.

This is when the Native Americans march over to the kids. As they were walking up, the black men once again instigated for the boys to be harassed. The elderly Native American man walked right into the group of teens and started banging his drum in their faces, while the black hate group stood back and instigated.

See the full video below:

The Covington Catholic Student involved then issued a public statement. 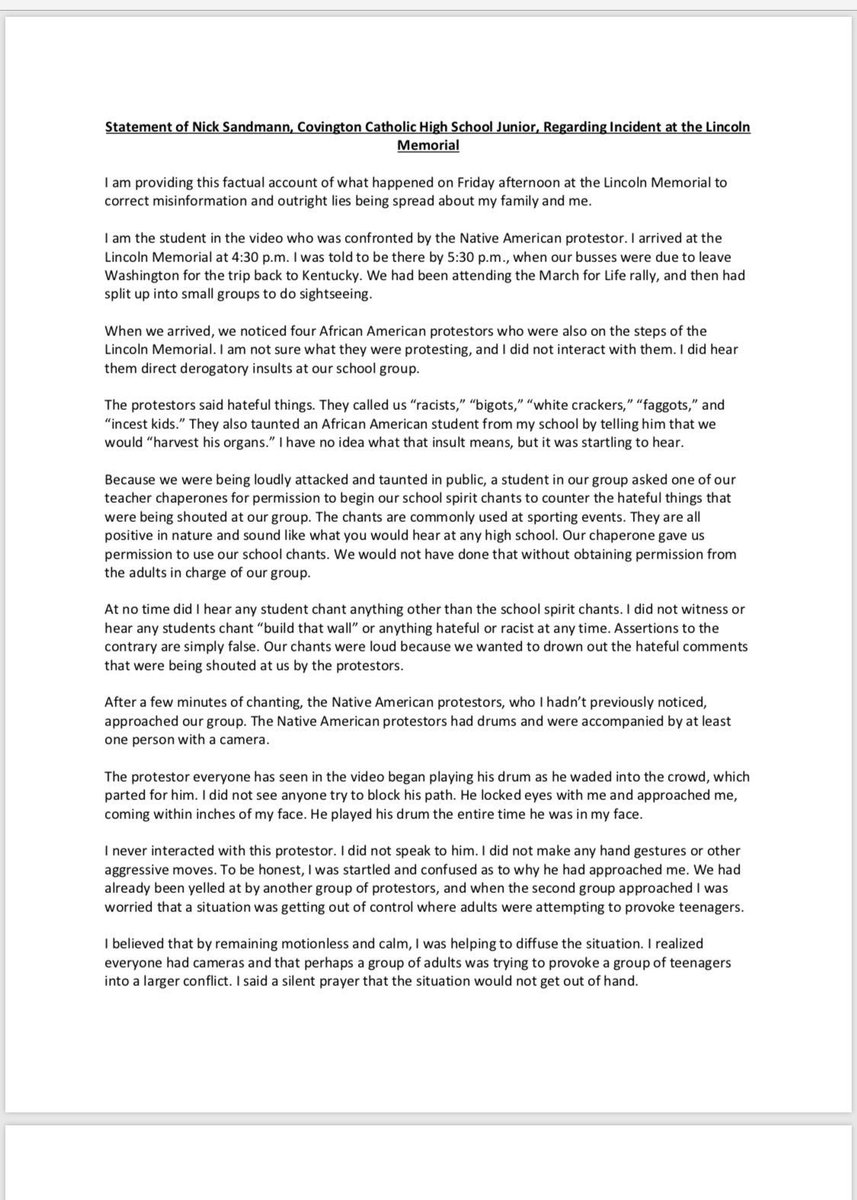 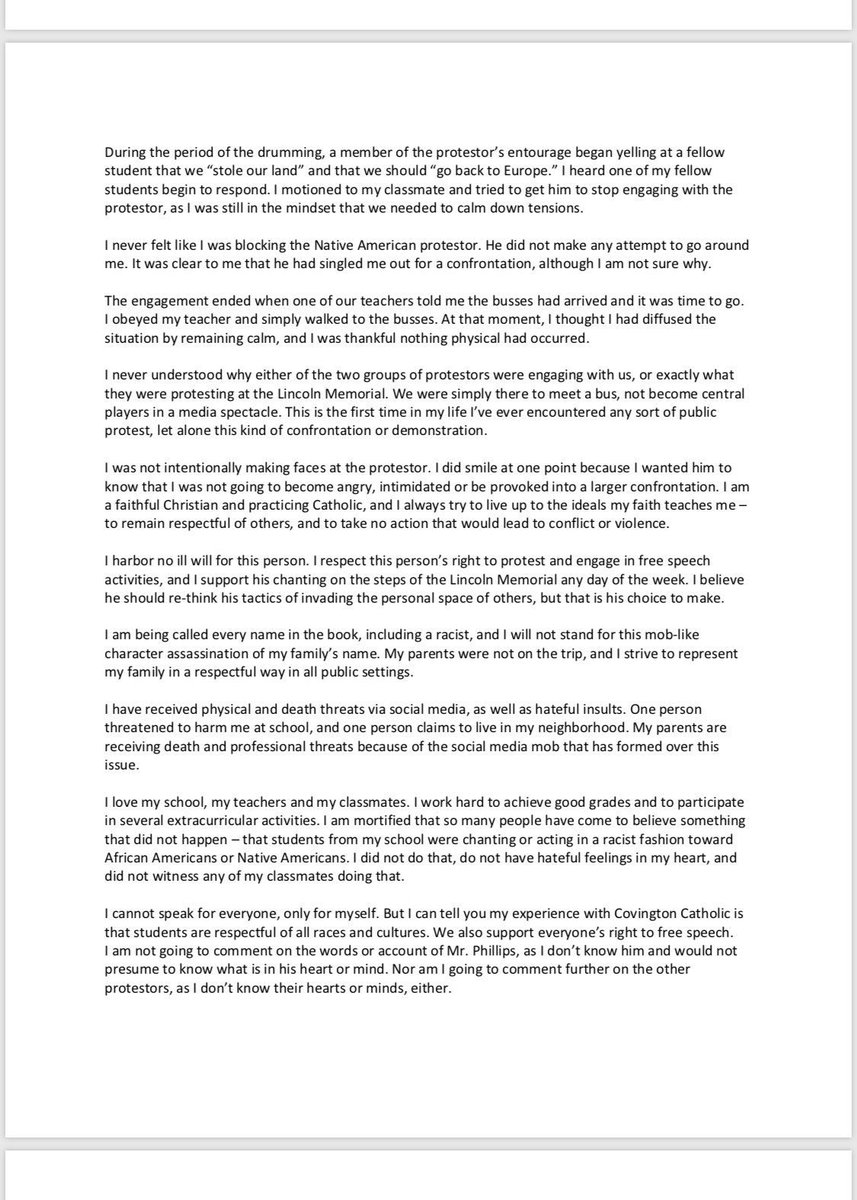 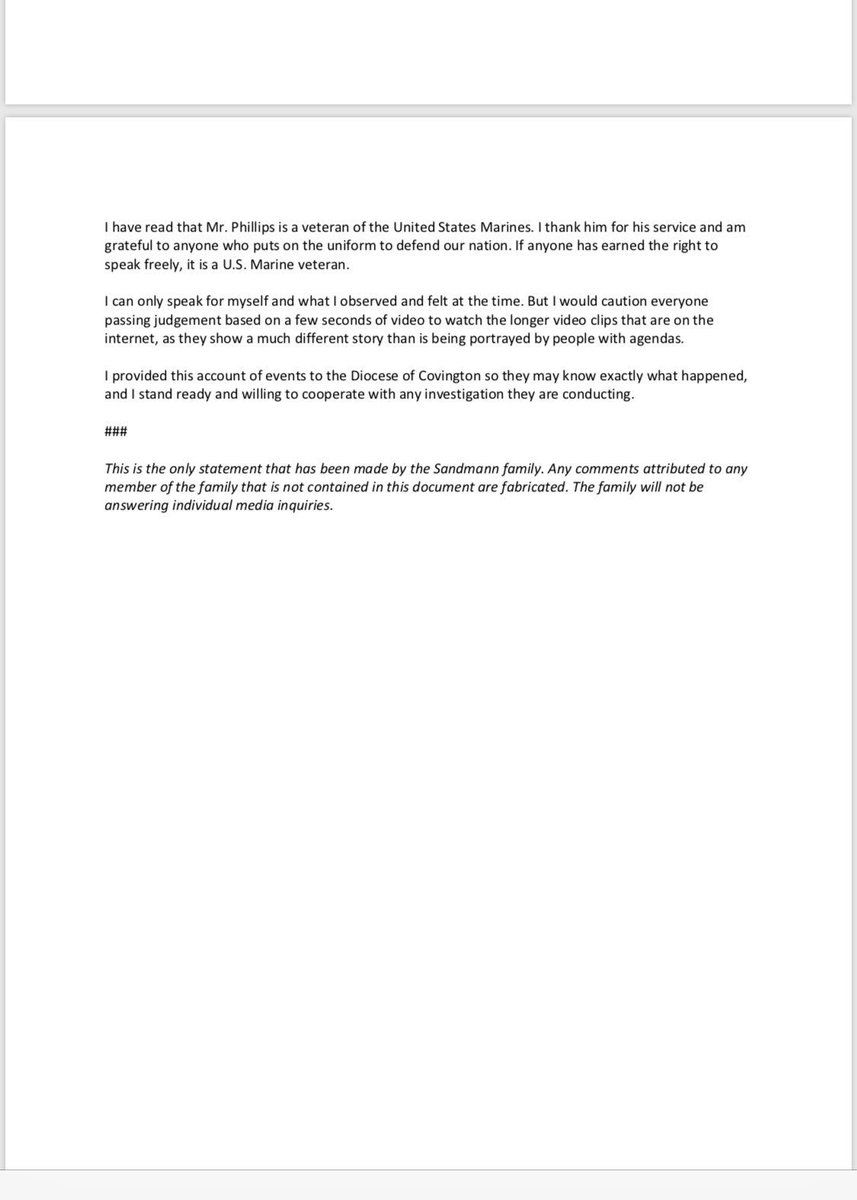 Don't forget to like SonsOfLibertyMedia.com on Facebook, Google+, & Twitter.
The opinions expressed in each article are the opinions of the author alone and do not necessarily reflect those of SonsOfLibertyMedia.com.
Previous Post:
Washington DC: Muslim Teacher Charged With Sexual Coercion Of Young Girls & Jihad Recruitment
Next Post:
5 People Arrested At Women’s March In Tennessee 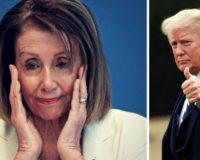