Don’t get too excited about the “good employment numbers” that you are hearing about from the mainstream media.  The truth is that they actually aren’t very good at all.  For years, the federal government has been taking numbers out of one category and putting them into another category and calling it “progress”, and in this article, we will break down exactly what has been happening.  We are being told that the U.S. unemployment rate has fallen to “3.8 percent”, which is supposedly the lowest that it has been “in nearly 50 years”.  If these were honest numbers that would be great news.  But these are not honest numbers…

Let’s take this one step at a time, and we are going to use the Federal Reserve’s own numbers.

According to the Fed, there were 6,065,000 working age Americans unemployed in May.

That would be an excellent number if it was an honest number.  But of course, that number does not tell the whole story.

According to the Federal Reserve, 95,915,000 working age Americans were “not in the labor force” in May.

So we essentially have 102 million working age Americans that are not employed, and that is the same level that we had four years ago.

And back during the peak of the last recession, the number of working age Americans without a job never surpassed the 100 million mark.

That means that there are more working age Americans without a job right now than there was at any point during the last recession.

All of those economic optimists out there should chew on that number for a while.

According to John Williams of shadowstats.com, if honest numbers were being used our unemployment rate would be somewhere around 21 percent at the moment.  That is a slight improvement from the 22 percent level that we were at not too long ago, but it is not nearly good enough.

So please don’t try to convince me that the U.S. economy is “doing well” until we can get the number of working age Americans without a job under 100 million.

For the 28th month in a row, YoY growth in spending has outpaced incomes, sending the savings rate back down to just 2.8, the lowest since the debt-funded holiday spending spree of December 2017, and just shy of record lows.

Spending YoY is the highest since April 2017: 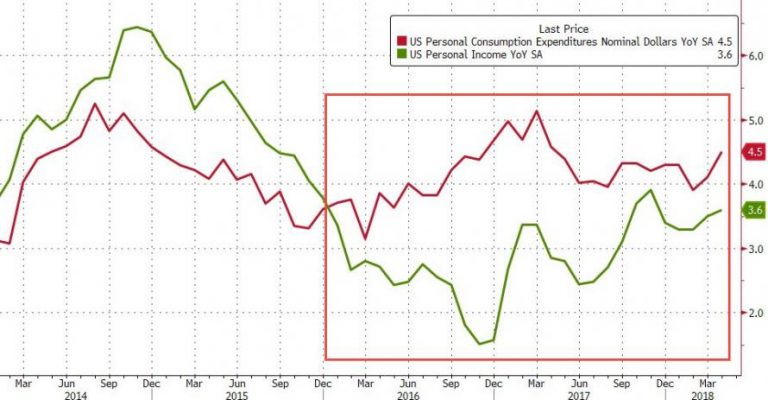 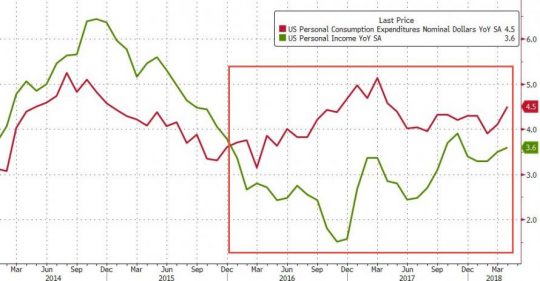 Adjusted for inflation, real consumption rose 0.4%, double the median projection of 0.2%. The Commerce Department said spending for gasoline and other energy goods, as well as household utilities, were leading contributors to the monthly increase in real outlays. Real durable goods spending, rose 0.3% after a 1.9% increase in the prior month; nondurable goods advanced 0.4% for a second month. Outlays on services, adjusted for inflation, rose 0.4% after a 0.3% gain in prior month.

Obviously, this is not sustainable.

And in the final analysis, there is really nothing sustainable about our current economic situation.  We are in the terminal phase of the greatest debt bubble that humanity has ever seen, and there are an increasing number of indications that the party is about to come to a very abrupt end.

We have never recovered from the last recession, and all of our long-term financial imbalances have continued to get even worse.  For the moment, much of the country is enjoying a debt-fueled standard of living that they do not deserve, and most of them have absolutely no idea that there is no way that this state of affairs can continue for much longer.

As individuals, we simply cannot consume far more than we produce indefinitely, and the same thing is true for our nation as a whole.

Time is running out, but most Americans are completely oblivious to this very simple basic fact.

Don't forget to like SonsOfLibertyMedia.com on Facebook, Google+, & Twitter.
The opinions expressed in each article are the opinions of the author alone and do not necessarily reflect those of SonsOfLibertyMedia.com.
Previous Post:
Georgia Kidnaps 15-Year-Old Son After Parents Treat His Seizures With Marijuana
Next Post:
Democrats Message On MS-13 Animals – They’re Not So Bad

Revival In The Time Of COVID — Franklin Graham Says More People Have Received Christ in 2020 Than In 2019
December 4th, 2020 Clash Daily

Video Shows Ballots Emerge From Covered Table After Poll Workers Were Told to Leave (WATCH)
December 3rd, 2020 Flag And Cross
Send this to a friend