Editor’s Note:  On Thursday’s The Sons of Liberty Radio, Pastor and author Matt Trewhella spoke about Christian resistance and it was powerful.  We must repent, fight and build in the midst of the ongoing tyranny now matter how dark it may seem  Victory is ours in Christ.  Let us battle as overcomers!

On November 15, 2021 the Idaho House of Representatives will reconvene to discuss the federal government Covid-19 vaccine mandate which is now temporarily blocked by a federal appeals court.  However, this mandate has now been extended to include health care workers who provide care to Medicaid and Medicare recipients that will add to the devastating economic hardship for many Idahoans.  Many questions surround these federal mandates with several states, including Idaho, filing lawsuits in opposition to those mandates.

But hidden behind this federal mandate that has trickled down to Idaho is a massive, well-coordinated plan with a specific goal that requires vaccine mandates and is actually being implemented.

One World Economic Forum (WEF) scheme is the Commons Project, building “digital services for the common good”, promoting the deception that people will be able to collect and manage personal health data digitally, then sharing that data with health services and organizations they trust.  Why would anyone in their right mind participate in this?  Likely, because everyone will be forced to participate.

According to the Project, maintaining control” over “digital lives” is associated with stronger communities “when data is open and can be shared for the benefit of all.”  That is collectivism.  The Commons Project has four projects.  CommonHealth for data, CommonPass for the vaccine passport, SMART Health Card to verify vaccination, and the CommonTrust Network.

The CommonTrust Network (CTN) is a global network of public and private organizations to help individuals with digital access to their health data.  WEF partners in the network registry include data sources such as labs, clinics, hospitals, and governments, including the United States.  These various data sources create digital certificates that contain private information and are then given to the individual to share.  Thus begins a massive trail of information that comes to the core of what is really going on.  Covid is not about any virus, it is about beginning the process of forcing every human into a digital identity, starting with mandatory vaccinations.  Vaccine passports have been banned in Idaho but the ability to travel is impacted without one.  And as seen by the graphic below the plan for required passports goes far beyond just travel. 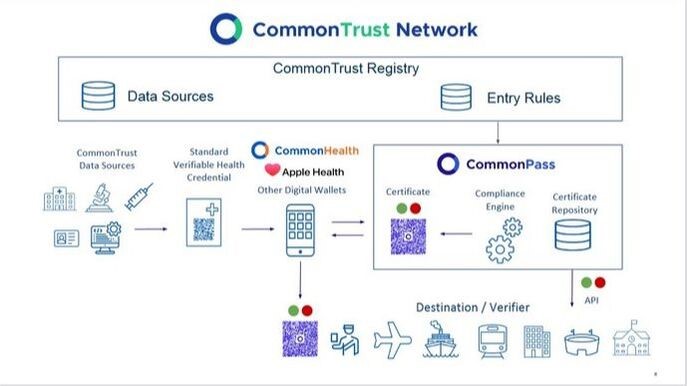 Partners in the SMART Health Card are more open, and includes some Idaho organizations as issuers.  As a participant in the Vaccine Credential Initiative (VCI), St. Luke’s is an issuer of SMART Health Cards.  VCI was created by a “coalition” of public and private organizations for harmonizing standards, developing implementation guides for medical purposes to return to work, school, and travel, and making “medical records portable“, while helping individuals obtain a digital copy of their vaccinations using open, interoperable methods. VCI members include the MITRE Corporation, Apple, Microsoft, and many others.  It isn’t just for vaccinations, VCI openly states  “A SMART Health Card stores healthcare information and other vital medical data.”  Just another step towards making us digital humans.

So there is the CommonTrust Network, with a SMART Health Card in which St. Luke’s participates as a card issuer, and a corporate led initiative, VCI, that is creating the ability to expand health information data beyond vaccinations that will be interoperable.  It is the MITRE Corporation involvement that brings in the deepest of states of our tyrannical federal government.

The MITRE Corporation is a federally funded R&D center with public-private partnerships, spanning across federal, state and local governments.  Tax dollars are used by this group to operate federally funded research and development centers (FFRDC), solving problems we didn’t know we have.  FFRDC centers involve themselves in aviation, health, government agencies, and defense.  Clearly, MITRE is using its funding powers to advance, support, and oversee the implementation guide development process to create vaccine passports, which is actually the beginning stages of a digital identity so we can “return to life in general”.  By its own admission, MITRE is “shaping the future of our nation’s critical infrastructure, including…healthcare“.  But MITRE might just be the U.S.  equivalent to the Russia KGB.  We have our own traitors, Ashton B. Carter, former Secretary of Defense and WEF member, is involved with MITRE as a consultant.

Probably unknown to most Idahoans, MITRE  has already invaded Idaho through its Sara Alert program, funded by the CDC.  Imagine all that data it has gathered on Idahoans.

So far, this is probably an overload of information.  But to put the frosting on the cake, there are a couple more plots for the morbidly curious.

Hot off the press is  the WEF Accelerating the Transition to Digital Credentials for Travel white paper.  Mentioned in the booklet is the Known Travell Digital Identity (KTDI) initiative, comprised of a “global consortium of individuals, governments, authorities and the travel industry to enhance security in world travel.”  Two partners in KTDI are Canada and the Netherlands.  How ironic the video on the website states the travel pass will be “piloted this year” which coincides with the recent announcement that international travel, championed by Canada and the Netherlands, will be opened back up.  No coincidence, it is deliberate to implement KTDI.

Another organization, in which the United States participates, is the United Nations International Civil Aviation Organization (ICAO).  It is a “global forum of States for international civil aviation with its own machine-readable travel documents (MRTD) that are globally interoperable.  ICAO’s eMRTD is the most widely used, globally interoperable digital credential in use today, to which the WEF and United States are totally devoted.  This will eventually transition to biometric standards as Canada has been testing with KTDI, and with participation by the U.S. Department of Homeland Security.

In this WEF video they discuss making these requirements the same across the world, including public entities, meaning governments, to bring in their rules in order to “harmonize” them for interoperability.  This fits nicely with its technology global governance agenda.

It is a corporate run world we are being forced to live in.  Corporations have the power to force us into a vaccinated world or endless expensive testing, or anything else they want, or we won’t be able to “return to normal life”.  Sounds too crazy?  In Australia vaccination status is now linked to buying tickets to an event via Ticketek. In Seattle and King County, vaccine verification is required.

This is a classic example of corporatism and how the corporate world in partnership with the government controls our lives.  Corporate world decides it wants this surveillance and intrusion into our lives, the government says great, at your service, how can we help.  There will be nothing private about one’s health care in this.

While the Idaho legislature will meet to work on banning vaccine mandates, and Idahoans are distracted by vaccine safety, adverse events, deaths, and individual rights in an effort to support them, in reality you will get vaccinated or your ability to live life will eventually be banned.  The federal government is already incrementally working on forcing vaccinations on everyone, violating countless federal laws, and the Constitution.

In Adams County, Idaho, the Commissioners just passed an ordinance making federal vaccine mandates illegal, recognizing the economic cost this would bring.  But the Commissioners are a role model for legislators.  Are Idaho elected officials willing to economically support Idahoans who stand up against unconstitutional federal mandates?  It may be difficult to enforce a vaccine mandate ban on large Idaho corporations such as St. Luke’s and Micron who are participating in this agenda, but how economically damaging would it be for them if Idahoans had other employment opportunities without a mandated vaccine?  What if the legislators decided to quit wasting money on so many other projects and put that money towards supporting businesses that would lose money for not complying?

The totalitarian corporate run government will only continue to expand with the eventual goal of economic ruins that will perpetually force people into government hands for survival.  Idaho officials must look at the cause of this infection, this cancer.  A vaccine mandate ban is not enough to stop what is happening.  It will take Idahoans banning the mandate by not complying, bringing a heavy cost to their livelihood.  But in turn, it will bring a heavy economic cost to businesses, just as pilots rejecting the mandate has financially disrupted the airline industry.  This is an economic war and must be fought with economic weapons.

Only one questions remains.  What if one’s phone dies?  Is all evidence of an individual erased as if they don’t exist?

Don't forget to like SonsOfLibertyMedia.com on Facebook and Twitter.
The opinions expressed in each article are the opinions of the author alone and do not necessarily reflect those of SonsOfLibertyMedia.com.
Previous Post:
Remembering The USS Liberty: We Must Never Forget!
Next Post:
DHS Propaganda: “Domestic Terrorists” A Threat Due To Illegal Aliens, refugees and COVID Lockdowns

About the Author: Karen Schumacher