(Willmar, MN)  Now, after the blaring headlines, the rest of the story.  For two weeks prior to the appearance of Usama Dakdok, an Egyptian born American evangelist to Muslims and founder of The Straight Way of Grace Ministry, the Willmar, MN interfaith group tried their best to shut the event down.  Failing to do so, a local “concerned” citizen launched a Facebook page that garnered almost 500 followers in an effort to get anti-Dakdok interfaithers to show up and protest the evening of the event on November 7.

It did not matter to the media and the protesters that virtually none of them had ever heard Pastor Dakdok in person.  The declaration of the local paper, the West Central Tribune, was that Dakdok was an “Islamophobic individual,” a Muslim hater and racist.  The primary source of their outrage and that of the interfaithers was a posting on the website of the Council on American-Islamic Relations (CAIR).  CAIR, which promotes itself as an Islamic civil rights group, is a Muslim Brotherhood front organization and unindicted co-conspirator in the Holy Land Foundation terrorism financing trial in late 2008.  Not a real reliable source of information about those who oppose it or speak out about Islam. The event was sponsored by THEE Book Club in Willmar, a small group of concerned evangelical Christians who want to understand Islam and how to reach out to Muslims.  The group was formed over a year ago and has brought a number of Christian and patriotic speakers to the region.  Heidi Jo Fragerlie-Ahmann, the main spokesperson for the Club, opened the evening with her personal testimony, which was quite moving and appropriately led into the topic for the evening.

An hour before the event, interfaithers and a large number of Somali showed up to protest with signs and bullhorn in hand.  They formed two long lines from the building entrance to the parking lot at Kennedy Elementary, in essence creating an intimidating gauntlet for event attendees.  Nevertheless, an estimated 150 interested people attended.  Surprisingly, but most welcomed, were about two dozen or more Somali attendees who stayed throughout Pastor Dakdok’s two-plus hour presentation.

Dakdok did not soften his anti-Islamic ideology message, despite the presence of the Somali attendees.  Throughout his strong message of concern about Islam’s tenets of belief as expressed in the Qur’an and other Islamic sacred texts, Islamic law and worldwide terrorism by Islam’s adherents, the Somali attendees remained calm and attentive.

At varying periods during the presentation a half-dozen or so Somali visited with THEE Book Club supporters in the lobby.  True interfaith dialogue occurred as individual Somali were able to express their feelings, concerns and experiences.  At the same time, Christian attendees were able to express love and compassion and at the same time share words of Biblical insight.  Biblical and Qur’anic concepts were shared and compared and questions answered about Christian beliefs.  Clearly, some Somali were searching for answers and understanding. 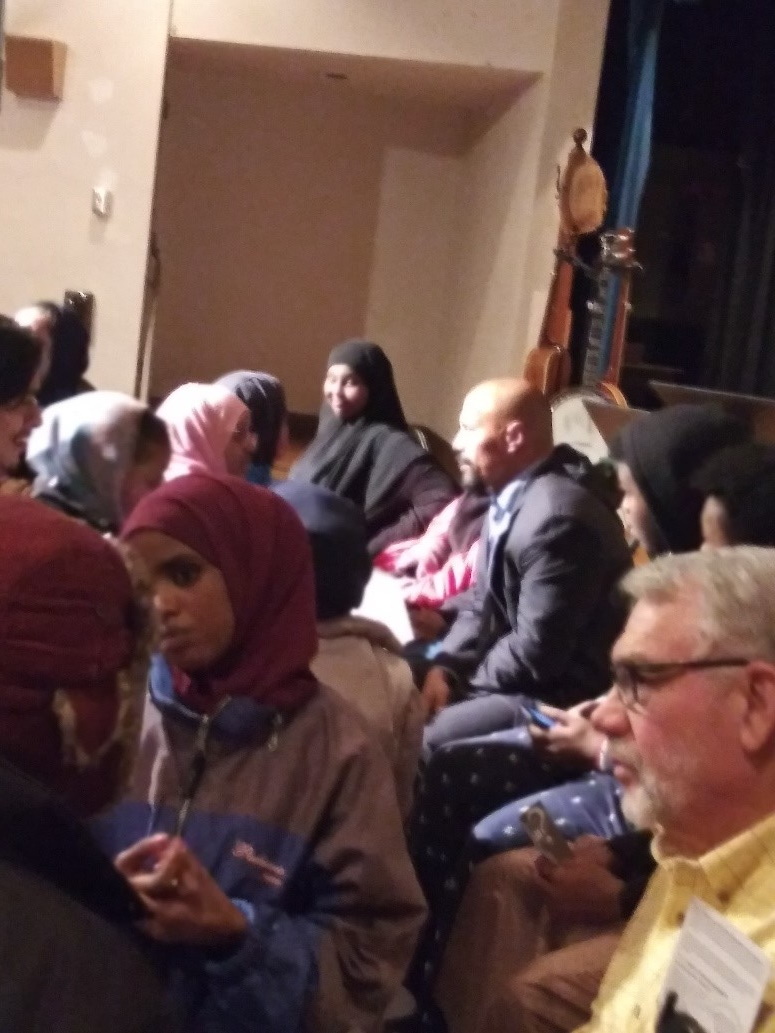 Perhaps the most telling moment of the event occurred at the end, long after the media left and had formed its foregone conclusion—that Dakdok is an anti-Muslim hate monger.  However, to his credit, after his passionate presentation, Dakdok opened the time for attendees to ask questions. Many Somali took the opportunity to express their concerns, quote the Qur’an and provide opposing positions to Dakdok. The dialogue that occurred, while not necessarily supporting Somali Islamic beliefs, was cordial and respectful.

The dialogue was apparently so intriguing, that after the meeting room cleared out, about a dozen Somali, Pastor Dakdok, and a few THEE Book Club supporters stayed and continued to have an enthusiastic and friendly discussion about Islamic and Christian beliefs.  This after-event gathering continued for over an hour.  It was a time of true interfaith dialogue where both Christian and Islam adherents came together to share their perspectives and understandings about their strong beliefs.  Verses from both the Qur’an and Bible were freely shared.  Somali felt free to express their beliefs, while Christians were free to share their testimonies and the Gospel of Jesus Christ.

Don't forget to like SonsOfLibertyMedia.com on Facebook, Google+, & Twitter.
The opinions expressed in each article are the opinions of the author alone and do not necessarily reflect those of SonsOfLibertyMedia.com.
Previous Post:
35 Reasons People Are Leaving California
Next Post:
Article 5 of the US Constitution: What “Convention of States Project” (COS) Isn’t Telling You

About the Author: James Gauss

Dr. Gauss has been writing for publication since 1961. He is the author of hundreds of newspaper articles and columns; numerous magazine and trade publication articles and various university extension publications. A thorough and precise researcher, his first book was published in 1998. Since then he has written and published over 18 books, the vast majority on Christian themes and spiritual insights. He has been a featured guest on many regional radio and television programs, including satellite TV. His website is: Understanding Islam In The Light Of Christianity

Just In: FBI Releases Crucial Information On Page And Papadopoulos That Could Change Everything
January 19th, 2020 Right Wing Tribune

NBC News Argues That Voting For Trump Is Unconstitutional
January 18th, 2020 The Lid

Protestants: The Power of Protest – Obedience to God is Found in Resisting Tyrants – The Language of Our Forefathers
January 18th, 2020 Sons of Liberty Media