President Donald Trump promised to eliminate the national debt in eight years.  Now, nearly halfway through his first term in office, Trump is overseen more than $3 trillion more in debt through more unconstitutional spending, and there doesn’t seem to be any effort to actually cut off the bleeding.  However, a new report out indicates that our national debt is ten times more than the actual tax receipts the government takes in.

This report comes from Ryan McMaken at the Mises Institute.

Politicians from Alexandria Ocasio-Cortez to Dick Cheney are united in their agreement that deficits don’t matter. Of course, that’s exactly what a politician would say. Politicians score points by spending other people’s money, so naturally, they don’t want to hear anything about how prudence suggests it might be a good idea to not spend that extra 800 billion dollars they don’t have.

But there is apparently little concern in Washington, DC as the annual deficit — for a single year, mind you — approaches one trillion dollars for the first time since the hit-the-panic-button days of the Great Recession. Except that now huge deficits are coming during “good” economic times.

Moreover, as the Congressional Budget Office has forecast, the debt load is expected to rise to 125 percent of GDP over the 20 years. That’s higher than the US debt-to-GDP ratio during World War II.

This, of course, assumes no major geopolitical or economic disruptions, which would make things far worse.

For those who believe huge debts are no big deal, however, there’s still no need to worry. After all, they say, actual debt payments are still only a minor issue. In fact, they’re still lower than where they were during the early 1990s.

Consider the first graph, for example. If we take the federal government’s interest payments, and calculate them as a percentage of federal tax revenue, we find 12 percent of what the feds take in has to paid out as interest. Back during the early nineties, on the other hand, the feds were paying more than twenty percent of their tax revenue toward debt service. 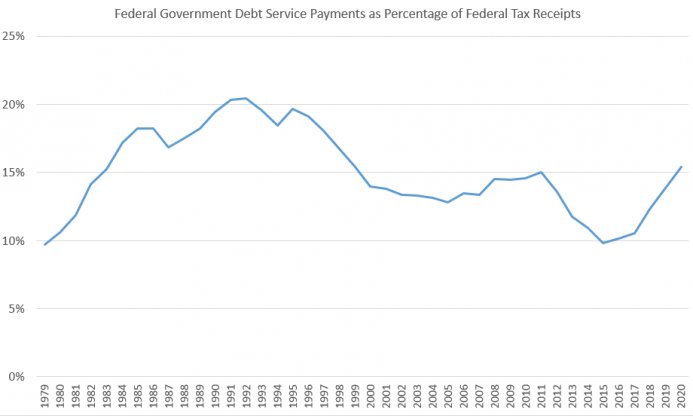 Source Office of Management and Budget and US Bureau of Economic Analysis.1

Of course, that’s not all due to debt load. A lot of it depends on the interest rate. Back in late 1990, for example, the target federal funds rate was over 7 percent. The 10-year note rate was around seven percent also — compared to around two percent today. Not surprisingly, the feds were paying more on the debt they owed than under current conditions with a note rate of two percent.

But, the CBO estimates the 10-year note rate to double between now and 2020. I’m skeptical it will rise that fast from its current low levels, but when it does go up, so will the amount of money the federal government has to devote to servicing the debt. And that means cuts to things like defense, social security, and medicare.

Moreover, as the debt gets bigger and bigger, the need to keep the interest rate low via central bank “quantitative easing” will become more important, meaning middle class savers will take more of a hit to savings accounts and pension plans.

But perhaps the most striking aspect of the growing debt is the fact there really is no end in sight, and the US has no chance of ever paying off the debt.

We can see this when we compare the total size of the debt with government revenue.

Part of the reason people have a hard time comprehending the sheer size of the debt is because it is often compared to total GDP size. For example, it’s easy to find online that the US debt-to-GDP ratio right now is around 105 percent. But what does that mean? One problem we encounter here is the fact when it comes to personal debt, people don’t think of making debt payments as a percentage of their household “GDP.” That wouldn’t make much sense since the ability to pay off debt usually depends on income. 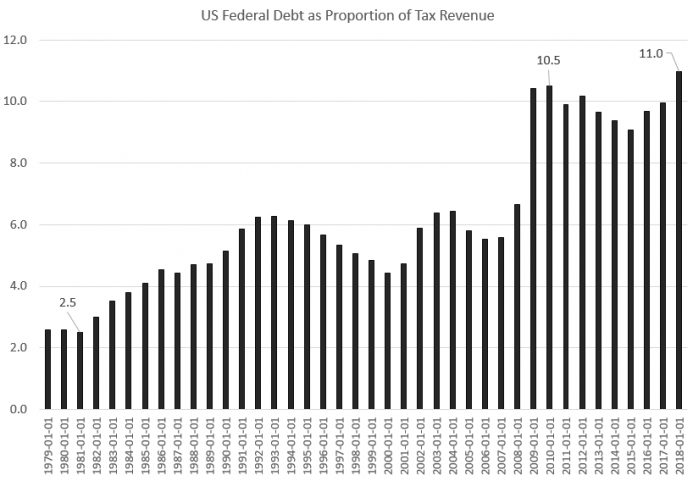 Specifically, in 2018, the national debt ($21.4 trillion) was 10.9 times the size of annual tax receipts ($1.9 trillion). That’s even higher than what it was during the dark days of the “stimulus” following the great recession. In 1981, on the other hand, the total debt load was only two-and-a-half times annual tax receipts.

From the perspective of household management, this is easier to comprehend. For example, if a household has an income-to-debt ratio like the federal government, that would mean an annual income of $100,000 and a debt load of a million dollars.

Now, at ultra low interest rates, if payments are interest-only, and non-debt-related daily expenses are fairly low, one could certainly manage this. But there are risks here. Interest rates could go up. Other expenses could rise. And in the end, the great-grandchildren are still paying off the debt for vacations and fancy trinkets their ancestors bought decades earlier. Even worse, if interest rates go up significantly, one’s great grandchildren have a lower standard of living because they have to devote more and more of their possible savings and consumption to unproductive debt service.

None, of this, however, is likely to convince those who think debt doesn’t matter. Some may still cling to the idea that the government can just print more money and purchase bonds to drive down interest and make payments.  There are at least two problems that emerge here. The constant forcing down of interest rates is a problem for those who rely on pension funds and other investments that need relatively lower-risk yield to grow. Meanwhile, households that are on fixed incomes will be harmed by growing inflation, if it takes the form of consumer price inflation. If, on the other hand, the money-supply growth leads to asset -price inflation (which is what we have now) then this will make housing more unaffordable, while locking out lower-income and lower-net-worth people from a variety of assets, such as homes.

Now, none of this is an apocalyptic scenario, but it is a scenario in which people with low and moderate incomes must pay more, and are able to save less and invest less. It’s a scenario of a standard of living that in decline. It’s a scenario in which much of the population faces more roadblocks to wealth accumulation and must devote increasing levels of income and resources to paying off the debts of past generations. Government amenities such as welfare payments and transportation facilities must also shrink as more tax revenue must be spent on debt service. And, of course, the tax burden on ordinary people certainly won’t be going down.

Well, yes, and the problem is that if a president actually knew the Constitution and obeyed it, nothing would ever be signed by him.  Sadly, we haven’t had a competent Constitutional president in decades.

And don’t get me the “well, he’s better than….”  That’s not really saying much.

The point of the article is for the people to push to educate the man occupying the people’s White House on his responsibilities and hold him to it, not make excuses for his ignorance, incompetence and lawlessness.

Don't forget to like SonsOfLibertyMedia.com on Facebook and Twitter.
The opinions expressed in each article are the opinions of the author alone and do not necessarily reflect those of SonsOfLibertyMedia.com.
Previous Post:
Constitutional Attorney Edwin Vieira Exposes The Criminality Of Red Flag Laws
Next Post:
Michigan: Father Locked In Cage After Peaceful Posts Criticizing Judge He Claims Is Responsible For His Son’s Death