Seriously, this follows after signing petitions to murder babies after birth by George Mason University students.  Kent State graduate and all around gun girl Kaitlin Bennett showed up undercover at UCLA to promote a petition that would put conservatives in concentration camps, and yes, there were students who signed it.

I actually believe that people in these indoctrination centers, more than less, don’t have a clue about life or the world around them.

Still, Bennett posed as Jenna Talia to ask students if they would sign her fake petition to throw conservatives in involuntary re-education camps, also known as concentration camps.

According to Liberty hangout:

Not only were the students she approached ecstatic to sign it, but one member of UCLA’s student government encouraged her to change the language to “diversity” and “sensitivity training” to hide their real intentions so the administration would approve it.

You see, this is not about higher education.  People like Bill Clinton, Barack Obama and Bill Ayers have learned this.  This is why they specifically targeted education to indoctrinate young people.

However, it’s not just liberal Marxists who are to blame.  President Ronald Reagan, whom all conservative fawn over, allowed the unconstitutional Department of Education to stand even though he declared it so and even ran on abolishing it as part of his platform.

Julie Borowski reminds us in a piece from 2011:

Eliminating the Department of Education used to be a standard Republican talking point. In 1980, Ronald Reagan ran on abolishing the federal department soon after Jimmy Carter created it. The 1996 GOP platform read, “the Federal government has no constitutional authority to be involved in school curricula or to control jobs in the market place. This is why we will abolish the Department of Education, end federal meddling in our schools, and promote family choice at all levels of learning.”

The Republican Party has since lost its way. George W. Bush championed the No Child Left Behind law—also known as the No Federal Bureaucrat Left Behind law—which has massively expanded the federal government’s role in education. With a few notable exceptions such as Michele Bachmann and Ron Paul, modern day Republicans have backed away from gutting the Department of Education. It has become more common for Republicans to promise that they will eliminate “waste, fraud and abuse” in government programs without giving any specifics.

Republicans need to return to their small government roots. We just can’t solve our budget problems and restore liberty by simply tinkering around the edges. Instead of pledging to “fix” unconstitutional government programs—we need more elected representatives willing to scrap entire departments. Today’s GOP should channel Mr. Conservative himself Barry Goldwater who declared that “I have little interest in streamlining government or in making it more efficient…my aim is not to pass laws, but to repeal them.”

The Department of Education is blatantly unconstitutional, like so much that the federal government does. The truth is that the federal government only has about thirty enumerated powers delegated to it in the Constitution. Education is not specifically listed in the document, which means that the authority over education should be left up to the states and the people. We cannot afford to waste anymore taxpayer dollars on failed national schemes.

Federal agencies always cost more than initially predicted. The Department of Education’s 2011 budget is nearly six times greater than its original budget. It has increased from $13.1 billion (in 2007 dollars) in 1980 to $77.8 billion in 2011. The federal government throwing more money at education has done virtually nothing to improve educational outcomes. Student test scores in math, reading and science have remained flat or declined over the past four decades. The chart below from the Cato Institute shows how increased federal spending has not had a positive effect on educational achievement: 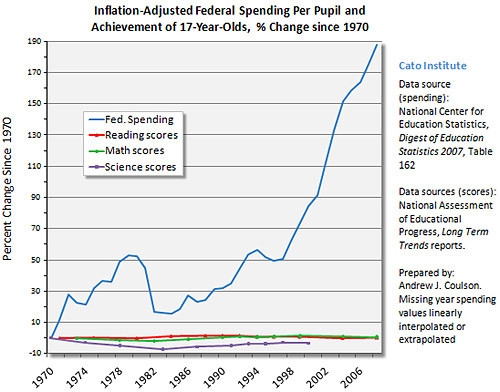 The federal government meddling in education has been a failure to say the least. A group of federal bureaucrats in Washington, D.C. cannot possibly design a curriculum that meets the unique needs of millions of school children across the nation. We need to restore control over education to the local level where teachers and parents are put back in charge. Make no mistake; eliminating the Department of Education is a pro-education position.

More of today’s Republicans need to grow spines and renew the call to abolish the Department of Education. It’s unconstitutional, a waste of taxpayer dollars and has been detrimental to the quality of education in America.

Reagan also tripled our national debt, but don’t look to self-proclaimed “conservatives” to remind you of that.  After all, they are too busy playing politics as usual while covering for the man wearing their team’s jersey when he acts unconstitutionally.

This is largely why I promote homeschooling.  Parents are charged by God to teach their own children (Deuteronomy 6:1-10).  I’ve even linked numerous times to where you can begin this journey of freedom for free by clicking here.

The history of our country, in the early days, was marked by a high literacy rate long before the federal government forced “public education” on society after Abraham Lincoln’s unconstitutional tyranny and the oppression that followed which demanded states take up education as part of their job.

President Donald Trump is no different than presidents who came before him with regard to education.  He is advancing the same unAmerican, unconstitutional, global indoctrination through Betsy DeVos and the unconstitutional Department of Education as the rest of them.

If you don’t believe me, you need to check out the reports that aren’t as “sexy” as the regular “news” by people such as Charlotte Iserbyt and Lynne Taylor.  On education, the Trump agenda is the same as the Obama agenda, the Reagan agenda, the Clinton agenda and the Bush agenda.  It is to dumb the citizens down.

And this video is just the latest evidence of that dumbing down.

Don't forget to like SonsOfLibertyMedia.com on Facebook and Twitter.
The opinions expressed in each article are the opinions of the author alone and do not necessarily reflect those of SonsOfLibertyMedia.com.
Previous Post:
UK’s Muslim “Advisor On Countering Extremism”: ISIS Bride Must Be Let Back In Or More Muslims Will Turn to Jihad
Next Post:
UN Education Agenda Continues To Advance Under Trump