University of Central Florida: Muslim Student Attempts To Get Another Student Expelled For Refusing To Wear Hijab

World Hijab Day is a sick farce in the first place.

With Muslim women all over the world forced to wear the hijab and subjected to violence if they do not, and courageous women in the Islamic Republic of Iran taking off their hijabs as a sign of their resistance to the oppressive Sharia regime under which they live, women in the U.S. are fed the false narrative that hijab-wearing women are harassed and persecuted in the West, and that they must stand in solidarity with them.

But now this Muslim student at the University of Central Florida, known only by her Twitter handle @anotherarabb, has let slip the authoritarianism and coercion that is at the heart of Islam: she wants a student who declined her invitation to don the hijab to be expelled from the school, apparently for “Islamophobia” and refusal to submit to Muslims as a good dhimmi should. @anotherarabb thereby reveals the problem that many in the West have with the hijab in the first place, that it is not a “free choice” for all too many Muslim women, but a symbol of their oppression and subjugation. 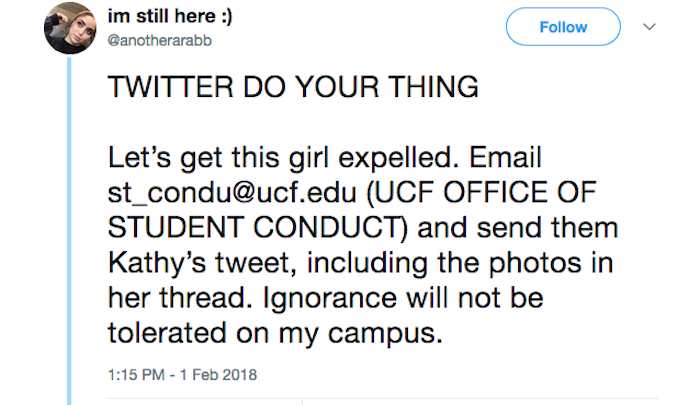 “Muslim Student Tries To Get Another Student Expelled For Refusing To Wear A Hijab,” by Rob Shimshock, Daily Caller, February 2, 2018:

A Muslim student tried to get another student expelled Thursday, which was World Hijab Day, after the second student refused to wear a hijab.

A Muslim student at the University of Central Florida said that she invited fellow student Kathy Zhu to try on a hijab, reported Twitchy. After Zhu declined her offer, the Muslim student, identified by Zhu to The Daily Caller News Foundation as UCF health sciences student Rayyan Sukkarieh, took to Twitter, posting “let’s get this girl expelled.”

Zhu showed pictures on Twitter of the UCF World Hijab Day booth, which displayed Sukkarieh, as well as signs reading “free headscarfs” and “my hijab is a symbol of understanding.”

“I’m in the back of the first pic,” said Sukkarieh on Twitter, noting she invited Zhu to try on a hijab. “You didn’t take the time to even ask questions or try to understand what Hijab is. That’s ignorant of you. You literally sprinted after taking the photos. Pathetic.”

“TWITTER DO YOUR THING,” continued the Muslim student. “Let’s get this girl expelled….Ignorance will not be tolerated at my campus.”…

Don't forget to like SonsOfLibertyMedia.com on Facebook and Twitter.
The opinions expressed in each article are the opinions of the author alone and do not necessarily reflect those of SonsOfLibertyMedia.com.
Previous Post:
TRUMP UNLEASHED: The President RIPS TOP BRASS at FBI, DOJ for ‘Favoring Democrats’
Next Post:
1 Concrete Nuclear Dome Is LEAKING RADIOACTIVE Waste Into The Ocean