Prices of commodities have plunged from recent highs. Has inflation peaked? 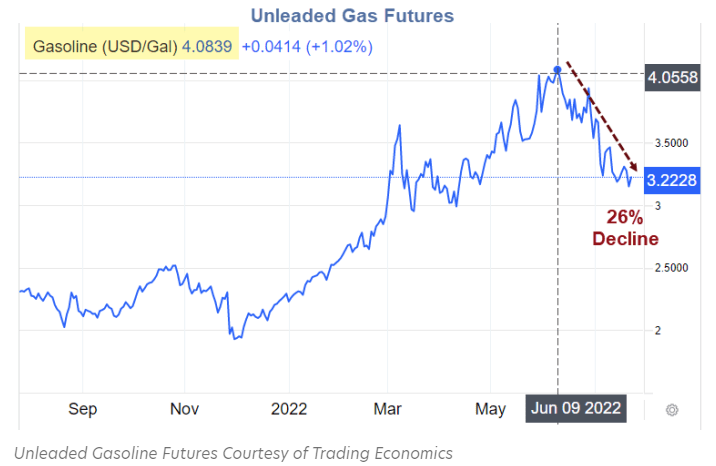 The Wall Street Journal reports There Are Signs Inflation May Have Peaked, but Can It Come Down Fast Enough?

Growing signs that price pressures are easing suggest that June’s distressingly high 9.1% increase in consumer prices will probably be the peak. But even if inflation indeed comes down, economists see a slow pace of decline.

Ed Hyman, chairman of Evercore ISI, pointed to many indicators that 9.1% might have been the top. Gasoline prices have fallen around 10% from their mid-June high point of $5.02 a gallon, according to AAA. Wheat futures prices have fallen by 37% since mid-May and corn futures prices are down 27% from mid-June. The cost of shipping goods from East Asia to the U.S. West Coast is 11.4% lower than a month ago, according to Xeneta, a Norway-based transportation-data and procurement firm.

Aichi Amemiya, U.S. economist at Nomura, said that though it is too early to call it, his forecast sees June as the peak for the annual measure of overall inflation. However, the month-over-month change in core CPI will be key to watch in coming months, he said. If it slows from June’s pace of 0.7% to 0.3% on a sustained basis by year-end, he expects the Fed to start planning to ease up on rate increases. That, however, will be hard to achieve, said Mr. Amemiya, “which means the Fed will likely continue tightening even after the economy enters a recession.”

"MoM change in core CPI will be key. If it slows from June’s 0.7% to 0.3% on sustained basis by YE, he expects Fed to plan to ease up. That will be hard to achieve 'which means Fed will likely continue tightening even after economy enters recession.'”https://t.co/99XfCfdggK

“MoM change in core CPI will be key. If it slows from June’s 0.7% to 0.3% on sustained basis by YE, he expects Fed to plan to ease up. That will be hard to achieve ‘which means Fed will likely continue tightening even after economy enters recession.’”

The Fed does not directly count home prices as inflation, but housing has slowed dramatically and with it the demand for lumber.

Wheat futures have declined about 36 percent from the May 9, 2022 peak.

Although there are significant declines in nearly every commodity, prices of energy, lumber, and wheat still remain elevated to historical norms.

Moreover, raw commodity prices are just one factor in overall pricing. Labor costs are a key component of finished goods, and labor costs are still rising.

Paul Krugman “I Was Wrong”

From @paulkrugman “Maybe in a hot economy the relationship between GDP and inflation gets a lot steeper.” https://t.co/l9uz4yfCHG https://t.co/kyjdx9qpXZ

Lefty economist Paul Krugman on why he was wrong about inflation: 'Nobody thought about logistic supply chains or any of that stuff' https://t.co/C8fbHo5zYT

Stop bullshitting, Paul Krugman. Both supply chain problems, geopolitical tension, pandemics & inflation risks were seen before by those who work on these things. Except that, as usual, hot shot economists only consider risks after the fact & like to send troups after the battle. https://t.co/4iAXlY1Osg pic.twitter.com/V7dUna2tuG

More broadly, should we be paying more attention to nonsupervisory wages than managers' wages? I'd argue the reverse. Think of why we have the concept of core inflation: we want less volatile prices, which are more likely to reflect expected future inflation 5/

Year-Over-Year Inflation has likely peaked. And given the steep plunge in gasoline prices, the CPI for July may be negative.

But rent makes up over 31 percent of the CPI and rent is still going up.

It may be a few more months before rent peaks. I will have an update on rent next week.

Don't forget to like SonsOfLibertyMedia.com on Facebook and Twitter.
The opinions expressed in each article are the opinions of the author alone and do not necessarily reflect those of SonsOfLibertyMedia.com.
Previous Post:
Beyond the Prepper Stockpile: Adventure, Adaptability, & Survival in the Modern World
Next Post:
Treasonous Supreme Court Injustice Elena Kagan Claims SCOTUS Must Follow “Public Sentiment” – Not The Law

About the Author: Mish Shedlock