US Senator Orrin Hatch (Utah) Legacy as a Purveyor of Deaths

Recently it was reported that retired US Senator Orrin Hatch (Utah) had died.  In 2019, I wrote the below newspaper article for publication regarding Hatch’s culpability in the unprecedented deaths to opioids.  Since publication of my article, deaths due to opioids have spiraled out of control and promoters of “harm reduction” have multiplied in record numbers advocating for legalization of all drugs as well as “safe injection sites” for addicts to freely shoot up illegal drugs.  The facts contained in my below article have not changed except for the number of escalating deaths — in the hundreds of thousands.  This will be Orrin Hatch’s legacy as he protected his friends from legal prosecution which could have put an end to the destruction of human life.  The words “Rest in Peace Orrin Hatch” are definitely not fitting for him in death.

Orrin Hatch, retired US Senator (UT) legacy will be remembered as the evilest purveyor of addiction and death in the U.S. 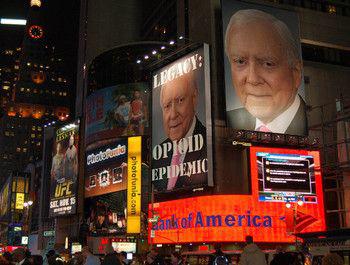 (MYRTLE BEACH, SC) – “During my Senate service, I fought diligently to combat the deadly opioid epidemic. Yet much work remains to be done,” said Orrin G. Hatch, Chairman Emeritus of the Hatch Foundation.

No, Mr. Hatch. As a US Senator from Utah and the Chairman of the US Senate Finance Committee, you sealed a report investigating the opioid epidemic killing and addicting in the hundreds of thousands. That will be your legacy for your family to live with — as a disgraced elected official and Mormon.

Hatch was a member of the U.S. Senate Finance Committee in 2012 when an investigation into the prescription opioid epidemic was launched naming several pharmaceutical companies — including the infamous Purdue Pharma, maker of OxyContin as well as the American Pain Foundation, the American Academy of Pain Medicine, the American Pain Society and several physicians.

Two of the physicians named in the investigation were Perry Fine, MD and Lynn Webster, MD both from Utah.

Hatch should have been charged with obstruction of justice and named as a defendant in the many lawsuits filed throughout the country against pharmaceutical companies such as Purdue Pharma.

My call for Orrin Hatch to be brought into legal action was based on the following information as regards the investigation into the prescription opioid epidemic addicting and killing in the hundreds of thousands:

Hatch’s friend, Lynn R. Webster, MD (named in the U.S. Senate Finance Committee investigation report sealed by Hatch) had his pain clinic raided by the Drug Enforcement Agency (DEA) several years ago after a rash of deaths under Webster’s care.

The DEA conducted a four-year investigation into the deaths of patients at Webster’s pain clinic. The agents documented that an entire file cabinet was labeled “deceased patients”.  Shortly before Webster was to be charged for the deaths in his clinic, the investigation was halted.

If any attorneys general or private law firms filing lawsuits throughout the country would like information into why charges were dropped, I am providing you with US Attorney John Huber of Utah’s email address. It is john.huber@usdoj.gov

Webster settled individual lawsuits initiated by deceased patients families out of court and it was reported that he can no longer prescribe prescription opioids or operate a pain clinic. Webster has now reinvented himself as pharma’s golden “recreational drug use clinical trial researcher” and is an “expert” testifying in front of the FDA.

This was promoted by Hatch’s Foundation on December 10 possibly in the hopes of recouping Hatch’s reputation and leaving him with a sterling legacy contrary to his criminal act:

Bill Cosby, America’s dad, is sitting in a prison cell at age 82 having been convicted of sexual assault. Orrin Hatch sealed and possibly destroyed a US Senate Finance Committee report on an investigation into the opioid epidemic devastating hundreds of thousands of American lives.

Hatch should have been held accountable for his crimes that contributed to a modern day Holocaust.

My published articles on Hatch:

Don't forget to like SonsOfLibertyMedia.com on Facebook and Twitter.
The opinions expressed in each article are the opinions of the author alone and do not necessarily reflect those of SonsOfLibertyMedia.com.
Previous Post:
Self-Control: A Part Of Good Health, Especially When It Comes To Your Weight (Video)
Next Post:
Balkan War Survivor Warns Americans: When Our SHTF Started, We Thought it Was Just a Temporary Disruption Too