The U.K.’s Sky News reported last Tuesday that the “U.S. military has ordered its troops in Europe to avoid wearing their uniforms when off base. Personnel have also been advised to ensure their privacy and geolocation settings on social media are not ‘overly revealing.'” Around 70,000 U.S. service members are affected by this directive.

It sounds as if the entire continent of Europe is occupied by a hostile invader and is under siege. Soldiers in the defense of freedom from their own countries and allied nations cannot wear their uniforms in Europe, for they might be killed for it.

How long will this capitulation be required? Well, their Muslim populations are not going anywhere. In fact, they are only growing, with the deleterious Euro-Med partnership and its projected 100 million Muslims in Europe by 2050, so it is safe to assume that this is the new (ab)normal.

This has been a long time coming. It is little noted, but the suicidal pact called the Euro-Mediterranean Partnership has the goal of creating a new Greater European Union encompassing both Europe and North Africa, with the Mediterranean Sea becoming a domestic Eurabian sea. The goal is to establish a “comprehensive political partnership,” including a “free trade area and economic integration”; “considerably more money for the partners” (that is, more European money flowing into North Africa); and “cultural partnership” – that is, importation of Islamic culture into post-Christian Europe.

Trending: "Doctors For Assange" Concerned He May Die In Prison: "Effectively Been Tortured To Death"

Skeptical? It has been happening for years now. The British newspaper the Daily Express reported six years ago, back in October 2008, on “a controversial taxpayer-funded ‘job centre'” that opened in Mali at that time as “just the first step toward promoting ‘free movement of people in Africa and the EU.’ Brussels economists claim Britain and other EU states will ‘need’ 56 million immigrant workers between them by 2050 to make up for the ‘demographic decline’ due to falling birthrates and rising death rates across Europe.”

To offset this decline, a “blue card” system is to be created that will allow card holders to travel freely within the European Union and have full rights to work – as well as the full right to collect welfare benefits.

In Europe, Muslims have already begun demanding special privileges and accommodations. This uniform ban is of a piece with that: not only is it dangerous for U.S. military personnel to walk around in uniform because of the possibility of jihad attacks, it is also “offensive” to many Muslims.

The U.S. military by this order is rewarding Islamic supremacism and imperialism with surrender. The cowardice of American authorities in the age of Obama is apparently inexhaustible. They don’t say, “Be alert, be vigilant, and stand up for yourself and your country. Defend yourself if attacked.” Instead, they say, “Don’t wear your uniform on the street.” Unconscionable.

Our nation’s military saved that continent from complete destruction – and now they can’t wear their uniforms there. That tells you all you need to know about how bleak things are looking in this clash of civilizations.

It’s not just Europe. The U.K. has advised its soldiers not to wear their uniforms in Britain, for fear they might be beheaded on a public street in broad daylight by devout Muslims, as was young British soldier Lee Rigby. Canada, too, surrendered and imposed the same restriction on their soldiers after last month’s rash of jihad attacks on their home soil.

This is saying, “We will respond to jihad attacks by hiding and curtailing our freedoms. This is cowardice.” This is saying, “We will walk around in fear of the jihadis, instead of being resolute in defending ourselves against the enemies of freedom.” Not only should our soldiers wear their uniforms; they should be armed at all times and respond to violence and attacks accordingly.

And while they are at it, they should warn soldiers not to wear any Atlas Shrugs or AFDI or SIOA insignia, or the U.S. flag or Constitution or Union Jack on a T-shirt, either. Maybe everyone best wear a burqa or a jihad war scarf (keffiyeh).

Will we shut down our bases in Europe because jihadists could target them and blow them up?

Don't forget to like SonsOfLibertyMedia.com on Facebook, Google+, & Twitter.
The opinions expressed in each article are the opinions of the author alone and do not necessarily reflect those of SonsOfLibertyMedia.com.
Previous Post:
A Mentor is no Substitute for a Father
Next Post:
Deafening Silence after Obama Buddy & HRC Founder Charged with Rape of 15-Year-Old Boy 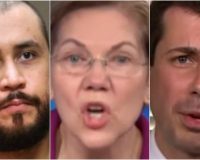