West Virginia: Church Burns Down – Not A Single Bible Touched By Flames

Sometimes, there are just miraculous things that take place and can only be explained by the belief that God is simply at work.  Such is the case in a story out of West Virginia, in which a church building burned down, but not a single Bible in the building was touched by the flames of the fire.

The fire occurred earlier this year in March at Freedom Ministries Church in Grandview, West Virginia, to which the Coal City Fire Department responded.

WPTV has the story:

A devastating fire — so hot that firefighters had to back out at one point — was ravaging through the building, the Coal City Fire Department said in a Facebook post .

But as they went through the charred wreckage, they noticed something extraordinary.

Not a single Bible, nor a cross was burned.

“Picture this, a building so hot that at one point in time, firefighters had to back out,” the fire department wrote on Facebook.

“In your mind, everything should be burned, ashes. Not a single bible was burned and not a single cross was harmed!!  Not a single firefighter was hurt!” the department wrote.

Of course, photos were provided showing the devastation and the unburned Bibles. 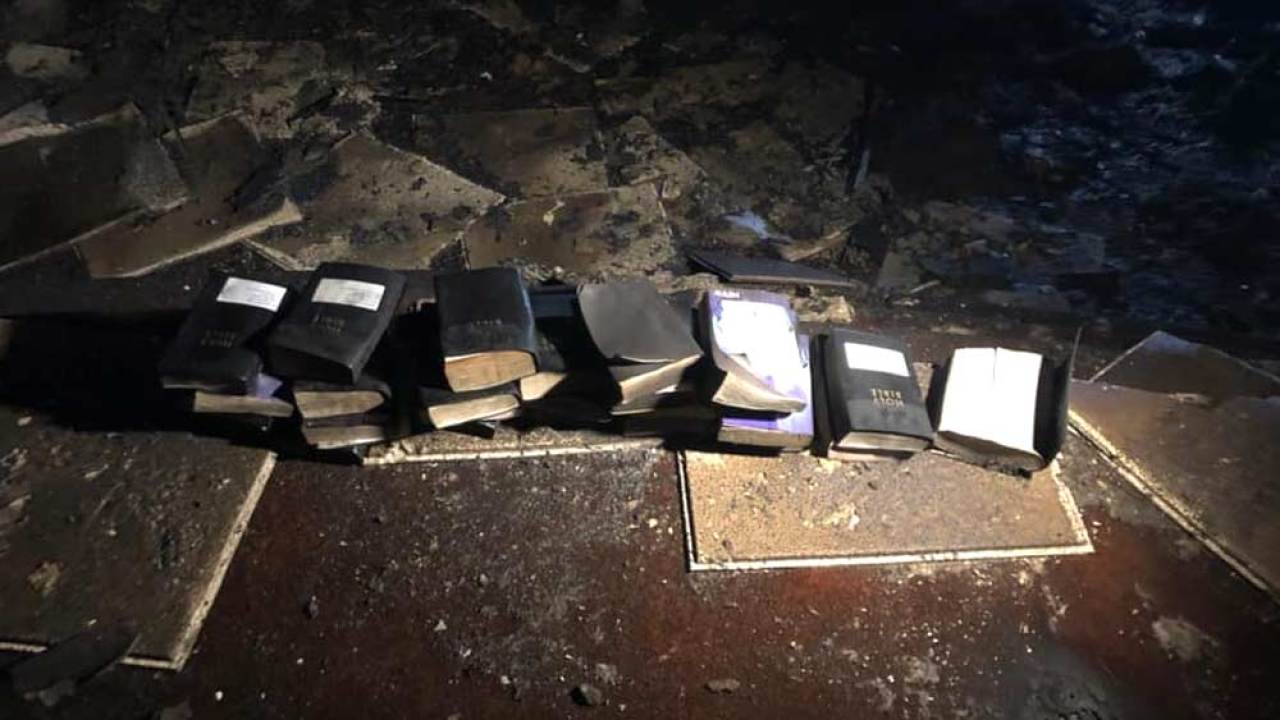 “Though the odds were against us, God was not,” the firefighters added.

Interestingly enough, sites like USAToday and The Washington Post have since deleted the story, while the leaast trusted name in news, CNN, continues to host their story on the blaze.

The story reminds me of Shadrach, Meschach and Abednego.  In Daniel 3, we read:

Nebuchadnezzar the king made an image of gold, whose height was threescore cubits, and the breadth thereof six cubits: he set it up in the plain of Dura, in the province of Babylon.

4 Then an herald cried aloud, To you it is commanded, O people, nations, and languages,

5 That at what time ye hear the sound of the cornet, flute, harp, sackbut, psaltery, dulcimer, and all kinds of musick, ye fall down and worship the golden image that Nebuchadnezzar the king hath set up:

6 And whoso falleth not down and worshippeth shall the same hour be cast into the midst of a burning fiery furnace.

7 Therefore at that time, when all the people heard the sound of the cornet, flute, harp, sackbut, psaltery, and all kinds of musick, all the people, the nations, and the languages, fell down and worshipped the golden image that Nebuchadnezzar the king had set up.

8 Wherefore at that time certain Chaldeans came near, and accused the Jews.

9 They spake and said to the king Nebuchadnezzar, O king, live for ever.

10 Thou, O king, hast made a decree, that every man that shall hear the sound of the cornet, flute, harp, sackbut, psaltery, and dulcimer, and all kinds of musick, shall fall down and worship the golden image:

11 And whoso falleth not down and worshippeth, that he should be cast into the midst of a burning fiery furnace.

12 There are certain Jews whom thou hast set over the affairs of the province of Babylon, Shadrach, Meshach, and Abednego; these men, O king, have not regarded thee: they serve not thy gods, nor worship the golden image which thou hast set up.

13 Then Nebuchadnezzar in his rage and fury commanded to bring Shadrach, Meshach, and Abednego. Then they brought these men before the king.

14 Nebuchadnezzar spake and said unto them, Is it true, O Shadrach, Meshach, and Abednego, do not ye serve my gods, nor worship the golden image which I have set up?

15 Now if ye be ready that at what time ye hear the sound of the cornet, flute, harp, sackbut, psaltery, and dulcimer, and all kinds of musick, ye fall down and worship the image which I have made; well: but if ye worship not, ye shall be cast the same hour into the midst of a burning fiery furnace; and who is that God that shall deliver you out of my hands?

16 Shadrach, Meshach, and Abednego, answered and said to the king, O Nebuchadnezzar, we are not careful to answer thee in this matter.

17 If it be so, our God whom we serve is able to deliver us from the burning fiery furnace, and he will deliver us out of thine hand, O king.

18 But if not, be it known unto thee, O king, that we will not serve thy gods, nor worship the golden image which thou hast set up.

19 Then was Nebuchadnezzar full of fury, and the form of his visage was changed against Shadrach, Meshach, and Abednego: therefore he spake, and commanded that they should heat the furnace one seven times more than it was wont to be heated.

20 And he commanded the most mighty men that were in his army to bind Shadrach, Meshach, and Abednego, and to cast them into the burning fiery furnace.

21 Then these men were bound in their coats, their hosen, and their hats, and their other garments, and were cast into the midst of the burning fiery furnace.

22 Therefore because the king’s commandment was urgent, and the furnace exceeding hot, the flames of the fire slew those men that took up Shadrach, Meshach, and Abednego.

23 And these three men, Shadrach, Meshach, and Abednego, fell down bound into the midst of the burning fiery furnace.

24 Then Nebuchadnezzar the king was astonished, and rose up in haste, and spake, and said unto his counsellors, Did not we cast three men bound into the midst of the fire? They answered and said unto the king, True, O king.

25 He answered and said, Lo, I see four men loose, walking in the midst of the fire, and they have no hurt; and the form of the fourth is like the Son of God.

27 And the princes, governors, and captains, and the king’s counsellors, being gathered together, saw these men, upon whose bodies the fire had no power, nor was an hair of their head singed, neither were their coats changed, nor the smell of fire had passed on them.

28 Then Nebuchadnezzar spake, and said, Blessed be the God of Shadrach, Meshach, and Abednego, who hath sent his angel, and delivered his servants that trusted in him, and have changed the king’s word, and yielded their bodies, that they might not serve nor worship any god, except their own God.

29 Therefore I make a decree, That every people, nation, and language, which speak any thing amiss against the God of Shadrach, Meshach, and Abednego, shall be cut in pieces, and their houses shall be made a dunghill: because there is no other God that can deliver after this sort.

30 Then the king promoted Shadrach, Meshach, and Abednego, in the province of Babylon.

While this is not men, the Word of God clearly was protected in this instance… in a pretty incredible miracle.

Don't forget to like SonsOfLibertyMedia.com on Facebook and Twitter.
The opinions expressed in each article are the opinions of the author alone and do not necessarily reflect those of SonsOfLibertyMedia.com.
Previous Post:
Judge In Planned Parenthood Baby Parts Trafficking Trial Demands Jurors Find Journalist Guilty
Next Post:
DARPA Seeks “Militarized Microbes” So They Can Spread Genetically Modified Bacteria