Who Do They Think That They Are Talking To?

“Apparently they have forgotten that they are talking to Americans who are paying attention to the details.”

Recently, we received a letter of a proclamation from The Joint Chiefs of Staff in Washington D.C. that every American ought to take the time to read.  It states: 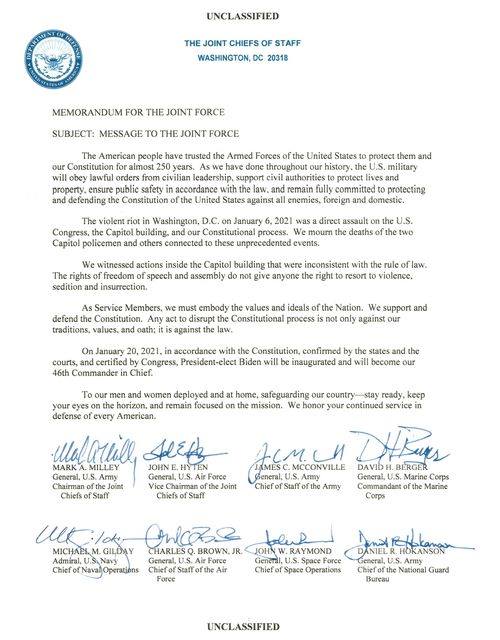 Apparently, these men that drew up this letter, the upper brass of the military, have forgotten that they are, in fact, defending the unconstitutional and unlawful acts of criminals within government acting out under the guise of American representatives.

Trending: The Covid PCR Test Is A Complete Fraud & Fauci Knew It All Along

To suggest that the American people have trusted the Armed Forces (Upper Brass) of the United States to protect them and our Constitution is a broad statement.

Who do you think you are talking to?

I do not know of anyone that has really trusted the higher ups in the military, although I know of almost everyone who has trusted concerning the men that have fought these wars.

Some short quotes from Smedley Butler, who was a United States Marine Corps major general which was the highest rank authorized at that time and at the time of his death the most decorated Marine in U.S. history, will explain this point.

“War is just a racket. A racket is best described, I believe, as something that is not what it seems to the majority of people. Only a small inside group knows what it is about. It is conducted for the benefit of the very few at the expense of the masses.”

“I spent thirty-three years and four months in active military service as a member of this country’s most agile military force, the Marine Corps. I served in all commissioned ranks from Second Lieutenant to Major-General. And during that period, I spent most of my time being a high class muscle-man for Big Business, for Wall Street and for the Bankers. In short, I was a racketeer, a gangster for capitalism.”

“I believe in adequate defense at the coastline and nothing else. If a nation comes over here to fight, then we’ll fight.”

“The trouble with America is that when the dollar only earns 6 percent over here, then it gets restless and goes overseas to get 100 percent. Then the flag follows the dollar and the soldiers follow the flag.”

“I wouldn’t go to war again as I have done to protect some lousy investment of the bankers. There are only two things we should fight for. One is the defense of our homes and the other is the Bill of Rights. War for any other reason is simply a racket.”

Let me say this:  No one stands up for the American military more than this ministry, no one.  However, we do so in righteousness (Deuteronomy 25:1).  After all, I come from a military family and have seen first-hand the sacrifice on all of our behalf.

Furthermore, why are they accusing the law abiders rather than lawbreakers, namely those in Washington D.C., for inciting domestic insurrection?

Isn’t this the establishment that they mean to defend in this proclamation, namely corrupt politicians of which Americans are sick and tired.  Why, yes, it is.

Why then would our military brass make claim to the lies told by the corrupt in government as being true? According to this proclamation, it is their job to stand not only against foreign enemies but also those that are here domestically. They best get to it because Washington D.C. is filled with domestic traitors to the Republic (Article 4, Section 4 US Constitution)!

Americans are tired of the scandals, the lies, the treason, the murder, etc. and that is the insinuation that this proclamation is making.

They write in their letter of the violent acts in D.C. as a direct assault on the US Congress, the capital building, and our Constitution, not on the American people.

Who, I ask, is responsible for creating the domestic insurrection more than the mainstream media working hand in glove with the corrupt in Washington D.C.?  No one.

I have a question for the military brass. It has been our boys that have fought bled and died in fighting these wars and yet, you have the audacity to suggest the blame lies at the feet of the Americans that live for what many died (2 Corinthians 5:15)?

You are protecting the very ones that are sending our boys into unconstitutional wars!  What part of transgressing the Constitution did you miss (1 John 3:4)?

Maybe, we should just all go along with your proclamation and act as if you are not working for these criminals.

After all, this is the same military brass that has sent in our boys to fight innocent nations and has killed millions in the name of profit on the behalf of bankers and the military-industrial complex.  Should we all act as if this were not true?  Because, again, that is what they are insinuating. Just ask General Wesley Clark.

Maybe they just hope that we forget what war criminal Henry Kissinger has said about our veterans in fighting their illegal wars.

“Military men are just dumb, stupid animals to be used as pawns in foreign policy.”

This criminal still advises presidents in this country.

Why would these individuals in the military suggest that what happened at the Capitol was the responsibility of law abiders?

Protecting criminals in Washington D.C. against the American people is not a good message to send but it is what you are saying and also doing (Proverbs 17:15).

These higher-ups all the while know that there were paid protesters bused into Washington D.C. that day, that these said police were opening doors for these protesters and provocateurs to go in and destroy at will (John 10:10). Modern-day brown shirts is exactly what they were and the Military Brass all the while knows this to be true (Luke 22:48).

Kind of odd that they would make such a claim, is it not?

Again, why would they leverage themselves in agreement with the mainstream media and their contrived false and blatantly fabricated stories against the American people when these were clearly the acts of lawbreakers (1 John 3:4)?

Conclusion: When your military brass agrees with the lies of the corrupt in Washington D.C., along with the mainstream media, you all the while know that nothing good is going to come of this.

Our boys and our family members in the military need to be made aware of what is happening in the higher-ups in this military (Not as if they do not already know) concerning the content of this proclamation.  After all, these are the ones defending the attackers (Revelation 12:10).

Don't forget to like SonsOfLibertyMedia.com on Facebook, Google+, & Twitter.
The opinions expressed in each article are the opinions of the author alone and do not necessarily reflect those of SonsOfLibertyMedia.com.
Previous Post:
DC Becomes A Police State As Tyrants Label These Americans As “Domestic Terrorists”
Next Post:
America’s Slide Into Economic Oblivion Is Already Starting To Accelerate Here In 2021

Do You Want To See Where This Is Going If Not Stopped? Employees Chase Down & Assault Customer Without A Mask…
February 27th, 2021 Sons of Liberty Media