Why Is Obama Flooding Small Towns In The Most Conservative Parts Of America With Refugees?

Why are small towns in conservative states being specifically targeted for refugee resettlement?  Of course the Obama administration will never publicly admit that this is happening, but it doesn’t take a genius to figure out what is going on.  Just look at the uproar that refugee resettlement is now causing in small communities in Idaho, Montana, North Dakota and Kansas.  The Obama administration has deemed large cities such as Washington D.C. to be “too expensive” for the refugees, and so large numbers of them are being dispersed throughout smaller communities all over the nation.  If you drop a few hundred refugees into a major city of several million people, it isn’t going to make much of a difference.  But if you drop a few hundred refugees into a small town that has only a few thousand people living there, you can start to fundamentally alter the character of the whole area.  Could it be possible that this is yet another way that Barack Obama is attempting to “fundamentally transform” America?

You would think that there would be more employment opportunities, cultural attractions and government services available for refugees in major metropolitan areas.  So it would seem natural to resettle them in those areas.  But instead, there seems to be a major push to resettle large numbers of them in small towns.

Needless to say, this is creating a huge uproar in many areas.  In fact, on Monday there is a major protest planned in Missoula, Montana.  The following comes from Leo Hohmann of WND…

Another big battle is brewing over Syrian “refugees” sweeping into small-town America.

Rural folks in Montana are pushing back against plans by urban elites to plant hundreds of Muslims from the Third World into Helena and Missoula. They plan a protest rally at 10 a.m. Monday in front of the county courthouse in Missoula. And if the pattern holds of similar rallies in Twin Falls, Idaho, and Fargo, North Dakota, a contingent of pro-refugee people will show up to counter protest.

Well funded pro-immigrant NGOs have been searching out local politicians that are willing to work with them to invite the Obama administration to resettle large numbers of Islamic refugees in their areas.  Unfortunately for residents of Missoula, politicians there seem quite willing to open the door…

Here in “Big Sky Country” local politicians in Missoula, working with pro-immigrant NGOs, are inviting the federal government to begin sending Syrians, comparing them to the Hmong refugees who fled Vietnam’s communists in the late 1970s. They have not been deterred by the fact that 98 percent of Syrian refugees are Sunni Muslims, the vast majority of whom FBI Director James Comey admits are impossible to vet for ties to terrorism.

Despite Comey’s warnings, the Missoula Board of County Commissioners sent a letter on Jan. 13 to the U.S. State Department requesting Syrian refuges. “We look forward to seeing approximately 100 refugees per year resettled in Missoula,” the letter states.

“Missoula is an ideal city for resettling refugees,” the letter continues. “Our community enjoys good schools, incredible natural beauty, and a low unemployment rate, among other factors.”

We have all seen the chaos that has erupted in Europe as massive waves of Islamic immigrants have been allowed in and resettled in large numbers in small communities.  Just a few weeks ago, I wrote about the epidemic of rape that is sweeping across formerly peaceful countries like Norway and Sweden.

And I am sure most of you have already read about the extremely alarming sexual crimes that Germany is dealing with now.  But many of us don’t seem to be connecting the dots.  What is happening over there could someday happen to our own wives and daughters.

Fortunately, there are some communities that are still willing to step up and take a stand against what the social engineers in Washington D.C. are trying to do.  One of those communities is Sandpoint, Idaho…

Cheers erupted from the audience when newly elected Sandpoint Mayor Shelby Rognstad asked the council to withdraw the resolution from consideration. A measure meant to counter statements from Bonner County commissioners and Sheriff Darryl Wheeler opposing the resettlement of refugees, the resolution was intended to restate Sandpoint’s commitments to human rights, according to Rognstad.

“This resolution has only served to divide us and this community,” said Rognstad, as he requested the withdrawal. “That saddens me.”

Once again, anti-refugee activists turned out in force to oppose the resolution and, once again, the council meeting procedure was punctured by applause and shouts. When Rognstad called for order, the crowd responded with catcalls.

But other small communities in Idaho are not so fortunate.

Just consider what is happening in Twin Falls…

Beginning the next fiscal year (October 1), some 300 Muslim refugees, primarily from Syria, will arrive in Twin Falls, Idaho, the Twin Falls Times reports.

But this miniature exodus from the Middle East to the small southern Idaho town of 45,000 people is believed to be just the tip of the iceberg, according to WND, which indicates that many more refugees from Iraq, Syria, the Democratic Republic of Congo, and likely Syria, are on their way. The conservative news site received reports that community leaders were told at a recent Boise State University conference held for “stakeholders” — including church groups and social service providers — that a couple thousand refugees are planned to a arrive statewide soon.

Look, I am all for assisting people that need our help.

In particular, I would love for our country to take in Christians from Iraq and Syria.  The things that ISIS has been doing to those that believe in Jesus Christ are almost too horrible to put into words, and yet Barack Obama has been almost totally silent on the matter.

Instead of taking in persecuted Christians, it has been estimated that well over 90 percent of the refugees from Syria are Sunni Muslims, and surveys have found that a significant percentage of them actually have a favorable view of ISIS.

In the mainstream media, we are told quite often that the number of refugees being brought in is 10,000 a year.  But that simply is not accurate.  In a previous article, I documented the fact that the White House has admitted that the number of refugees being resettled in this country has been increased to 100,000 per year.  The following is a message that was tweeted by the official White House Twitter account on September 28th… 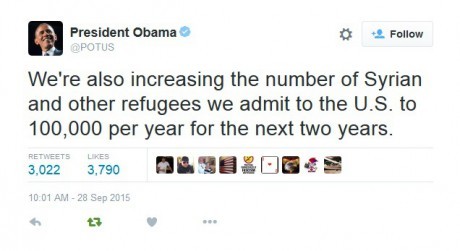 I don’t see how there could be any confusion.  Barack Obama himself says that we are bringing in 100,000 refugees a year for the next two years.

Not all of these refugees are coming from Syria, but the vast majority of them are coming from countries where a radical version of Sunni Islam is practiced as a way of life.

When large numbers of refugees are injected into a small community, the character of that community can be fundamentally altered.  And at this point, it appears that there is a concentrated effort to funnel large numbers of these refugees into small towns in some of the most conservative states in the country.

If you are concerned about what is going on in places like Missoula, Sandpoint and Twin Falls, you might want to check on what your own local politicians are doing.

An insidious agenda is at work, and I have a feeling that this is just the tip of the iceberg.

Article reposted with permission from The Economic Collapse Blog, the opinions and views shared do not necessarily reflect the views of Sons of Liberty Media.

Don't forget to like SonsOfLibertyMedia.com on Facebook, Google+, & Twitter.
The opinions expressed in each article are the opinions of the author alone and do not necessarily reflect those of SonsOfLibertyMedia.com.
Previous Post:
The Depopulation Agenda: Eliminate 90% of Mankind
Next Post:
White House Covers for Hillary Clinton: “Based on What We Know” She won’t be Indicted