The mainstream media and those who still are stuck in the left/right paradigm want you to choose a side. Police brutality, or looting. It is possible to side with neither at the same time because they are both wrong.  What a surprise! They need you to choose to stay divided instead of standing up together against all violence and all shows of violence.

“The state and its aggression, and the people the loot innocent businesses are not justified in their actions. It doesn’t even mean their both equal, it just means they’re both wrong and it’s easy to speak about both. It is a false choice, a false dichotomy to suggest otherwise,” says July. “Anybody that doesn’t have a brain the size of a coronavirus can actually hold two positions at the same time.”

“What’s happening here…is you haven’t been paying attention,” July adds. Police brutality in all forms is wrong.  Violence committed against non-violent people is wrong no matter what kind of uniform you have on. It’s morally apprehensive and should not be tolerated. The same can go for the looters and rioters.  It’s wrong to destroy businesses and harm innocent people who have done nothing wrong.  It’s the same position.

But it gets more sticky for those who have chosen sides – either side.  There’s a solution to the looting and rioting, and we’ve seen it first hand. It wasn’t the police that protected a town in Idaho from violent thugs:

People are willing to stand up and protect each other against those who are committing violence and crimes against other small private businesses. But we aren’t standing together against the militarized police who brutalize people daily, not just when there are looting and rioting. Why do they get a pass? The cognitive dissonance by so many is hardly an excuse anymore. We all know committing acts of violence against non-violent people is wrong. It’s wrong when police do it. It’s worn when the militaries of the globe do it, and it’s wrong when looters do it. 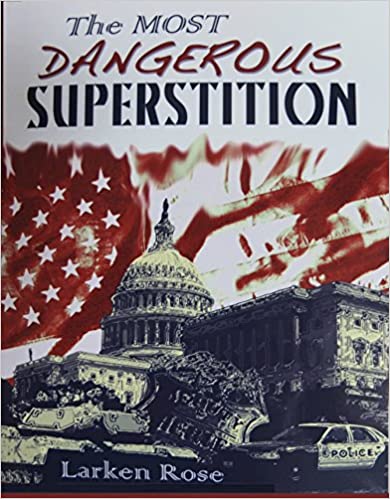 Just hold a moral position. That’s it. If you start to allow some a pass on violence because of badges don’t be surprised when it’s you or your guns they come for next, because that’s the next step in all of this. Martial law to bring in a New World Order, and your total enslavement.

Larken Rose’s The Most Dangerous Superstition is an excellent resource for those who still think aggression against innocent people is conducive with a free society.  If you want to be free, you first have to free your mind, and realize not only what is going on around you, but who is taking your freedom from you.

The primary threat to freedom and justice is not greed, or hatred, or any of the other emotions or human flaws usually blamed for such things. Instead, it is one ubiquitous superstition that infects the minds of people of all races, religions, and nationalities, which deceives decent, well-intentioned people into supporting and advocating violence and oppression. Even without making human beings one bit more wise or virtuous, removing that one superstition would remove the vast majority of injustice and suffering from the world.

Don't forget to like SonsOfLibertyMedia.com on Facebook, Google+, & Twitter.
The opinions expressed in each article are the opinions of the author alone and do not necessarily reflect those of SonsOfLibertyMedia.com.
Previous Post:
Weeding Out Distractions & Maintaining Focus: 4 Key Focal Points
Next Post:
As US Cities Crumble, Demand For Rural & Suburban Properties Soar