Did A 7 Year Old Really Tweet This – Or Is “Fake News” Driving the Syrian War?

There have been more than a few times that the veracity of Syrian children used in photo ops has come into question.

The truth is always the first casualty of war.

Really, we have virtually no idea what is really going on in Syria. Everything we know about the conflict is behind a thick fog of war that serves to hide the hypocrisy of a double game where the U.S. is pretending to pursue radicals while secretly backing their efforts.

in Syria, and using the image of children to sensationalize the struggle there.

After the shameless exploitation of the ‘ambulance boy,’ a seven year old girl is now serving as the poster child for the rubble wear Syrians who’d like to see Assad removed from power.

This mother and daughter team have been Twitter-casting their constant brushes with death, somehow barely surviving and always living to send more melodramatic tweets… powering their phone via solar energy.

Supposedly, this Tweet was sent out by a frightened seven-year-old girl under fire somewhere in Aleppo:

After all the manipulative headlines and shocking stories, many are calling B.S. on the little girl that sounds more like a propaganda mouthpiece and a bit of a drama queen. But the propaganda is biting back – in another effort to shut down “internet trolls.”

Here is what Raw Story is reporting:

On Monday afternoon, Alabed tweeted, “Under attack. Nowhere to go, every minute feels like death. Pray for us. Goodbye – Fatemah #Aleppo.”

They are claiming that – guess what – Internet trolls are now harassing a little girl in war-torn Syria:

At first glance, it probably does seems like these “Internet trolls” are spiteful pieces of garbage who should be scorned for daring to insult poor, innocent children. But on second glance, they are people who are pointing out the total facade that is Syria, for which we have no just cause for intervening.

How many times has this one child been caught in the crossfire? Are we really supposed to believe that this dramatic narrative is reality and not just a story?

The Twitter stream contains one dramatic cry for help after another… and while it is sentimental and heart-wrenching, it seems a little larger than life, particularly when you take into consideration the history of children used in propaganda for the Syrian war:

I am sick now, I have no medicine, no home, no clean water. This will make me die even before a bomb kill me. – Bana #Aleppo

This is my reading place where I wanted to start reading Harry Potter but it's bombed. I will never forget. – Bana pic.twitter.com/6fXX2Me8ZB

This is our house, My beloved dolls died in the bombing of our house. I am very sad but happy to be alive.- Bana pic.twitter.com/9i0xxJrQtD

Tonight we have no house, it's bombed & I got in rubble. I saw deaths and I almost died. – Bana #Aleppo pic.twitter.com/arGYZaZqjg

Her mother also makes repeated pleas for help while tweeting about her dying moment:

Last message – under heavy bombardments now, can't be alive anymore. When we die, keep talking for 200,000 still inside. BYE.- Fatemah

That’s just a small selection… the Tweets go on and on.

Reasons have been manufactured to win support in the hearts and minds of the American people, and emotional appears are usually the first order of business in that attempt to manufacture sympathy and sway opinion.

You can label someone an Internet troll and try to shut them down for saying so, but it doesn’t change the truth of the matter. These wars are manufactured b.s. It is just more Hearst publishing techniques.

Just beneath the surface, the White Helmets, who’ve been systematically implicated in spreading fake and manipulative images from inside Syria in order to garner support from the naive West, have been steadily at work in Syria manufacturing consent for war.

It is a total psyop and propaganda campaign. These are the ones wagging the dog. 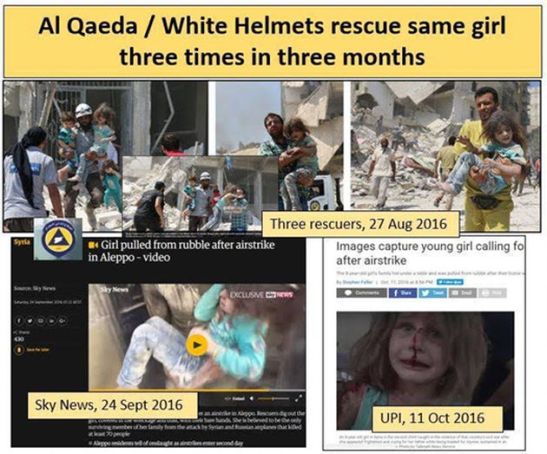 There have been more than a few times that the veracity of Syrian children used in photo ops has come into question.

According to 21st Century Wire:

They claim they are not “tied to any political group in Syria, or anywhere else”, yet they are embedded with Al Nusra Front, ISIS and affiliated with the majority of US allied terrorist brigades infesting Syria.  In fact during my recent trip to Syria, I was once again struck by the response from the majority of Syrians when asked if they knew who the White Helmets were.  The majority had never heard of them, others who follow western media noted that they are a “NATO construct being used to infiltrate Syria as a major player in the terrorist support network.”

Politically, the group has been called nothing but a smoke screen for al Nusra and the other “moderate rebel” terror-connected groups whom the U.S. have been backing in a sophisticated proxy war to topple Assad… and provoke the next stage of war in the middle east.

Is it really unfair to ask yourself whether this stuff is even true at all?

Don't forget to like SonsOfLibertyMedia.com on Facebook and Twitter.
The opinions expressed in each article are the opinions of the author alone and do not necessarily reflect those of SonsOfLibertyMedia.com.
Previous Post:
Why Can’t We Focus More On All Of The Good News In The World?
Next Post:
Illegal Aliens: When the Federal Government Won’t Enforce the Law