Notice the sides of Lincoln’s throne, above? Those bundles of sticks are an ancient Roman contrivance called fasces, from which we get the word fascism.

Lincoln is still a much-revered figure to millions of ignorant Americans who were programmed in government schools. But an exciting new trend has begun: more Americans are learning that, like Russians and Chinese, we were lied to in school.  The most destructive fraud promulgated by American schools is that Abraham Lincoln was a great president.  In truth, as you’ll learn here, Lincoln was the most monstrous, ruthless, destructive president in our history.

Americans are completely ignorant of the affinity that Abraham Lincoln had for Karl Marx and his Communist system. As Americans banish the Confederate flag, those who think Lincoln was a hero are as ignorant of our history as the average Russian citizen is, of his.

Lest you think I exaggerate, the first resource I recommend is available at no cost. Reading Karl Marx with Abraham Lincoln: Utopian Socialists, German Communists, and Other Republicans is a September 2011 article in The International Socialist Review, the communist news magazine of record.  That piece describes the mutual admiration between Marx and Lincoln.

Another book is Lincoln’s Marxists by Al Benson and Walter Kennedy.  This one delves into the ties between Marxism, Lincoln’s unconstitutional new national army, and the neo-nascent GOP that rose from the ashes of the Whig party.  It is a shocking exposé of our most execrable president and his U.S. Army generals, proud followers of Karl Marx.

Another book to show you Lincoln’s true character and the lasting destruction he wrought on America is Lincoln Unmasked: What You’re Not Supposed to Know About Dishonest Abe, by Professor Thomas DiLorenzo.  Having ignited a fierce debate about Lincoln’s legacy with his book The Real Lincoln, in this work DiLorenzo presents stunning new evidence to explode the popular myths about Lincoln.  It is a shocking portrait of a political manipulator, opportunist and tyrant; the opposite of the idol introduced to all American school children.

The fourth book to banish idolatry of America’s hijacker is America’s Caesar by Greg Durand, in two volumes.  With a huge number of original source documents, Durand paints a picture of a 19th century agnostic attorney who represented riverboat operators and railroad barons – whose only use for Jesus Christ was to lure the masses.  This portrait of the most destructive man in American history makes Bill Clinton a saint in comparison.

The fifth book I recommend is Larry Tagg’s The Unpopular Mr. Lincoln, a compilation and analysis of hundreds of public statements and newspaper articles during Lincoln’s administration.  In the opinion of his own closest associates, Lincoln was the most deeply despised president in our history. As West Virginia statesman Sherrard Clemens said of Lincoln, “he is a cross between a sandhill crane and an Andalusian jackass…He is vain, weak, puerile, hypocritical, without manners, without moral grace, and as he talks with you, he punches you under your ribs….(and) he is surrounded by a set of toad eaters and bottle holders.”

The sixth book that will open your eyes about Lincoln is A Century of War by John Denson. It provides copious, irrefutable, original source evidence that Lincoln’ handlers – Northern mercantilists – got Lincoln to defy his own cabinet and sucker the South into firing the first shots at Fort Sumter, where no one was killed or wounded.

Our present descent into tyranny while the people do nothing, suggests that America suffers a case of mass insanity.  Since Lincoln’s and Darwin’s era, America turned against God to accommodate every imaginable sin, and a few unimaginable ones.  The wages of such rebellion has been God’s judgment: we presently wander in the desert, oblivious to where we have been and to what happened there.  We are dumbfounded hijack victims, staring out the windows.  Our only path back to sanity is repentance.

But a second aspect of our national insanity is actual insanity, as defined.  In the psychological phenomenon known as Stockholm syndrome, also called capture–bonding, hostages begin to bond with their captors; eventually even to love and defend them.  The victim begins to consider any brief cessation of abuse to be an act of kindness by his captor.

This form of traumatic bonding does not require a hostage scenario, as Dutton and Painter (Victimology Journal, 1981) found: “(S)trong emotional ties…develop between two persons where one person intermittently harasses, beats, threatens, abuses, or intimidates the other” such as is commonly seen in abused wives.  It has also been evident in many populations under totalitarian rule.

A common hypothesis for Stockholm syndrome is that it’s the victim’s response to the trauma.  By identifying with the aggressor, the ego defends itself. If the victim can just adopt the same values as the aggressor, the dire threat ceases to exist. Another mental defense mechanism known as Normalcy Bias may come into play as with the two oldest generations of former Soviet subjects after collapse of the USSR.  In the victim’s mind, nothing can alter the conditions to which the victim is accustomed. 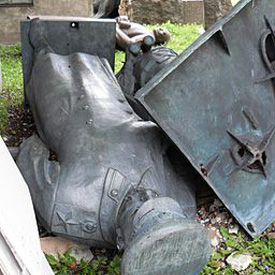 A traveler in Europe recently posted a description of Lithuania’s Grutas Park – a chilling display of communist statues that were removed from public squares in Lithuania. “Families with young children roam the park and it is no exception to see young children posing with Lenin or Stalin while their dad is making a picture. It is also a strange experience to visit…souvenir shops where you can buy mugs or small glasses with a portrait of Stalin on it.  Why would anyone buy a mug with the portrait on it of he who ordered the death of millions? … Bizarre but true.”

That park filled with former tyrants’ statues is less bizarre than America’s love affair with Lincoln. 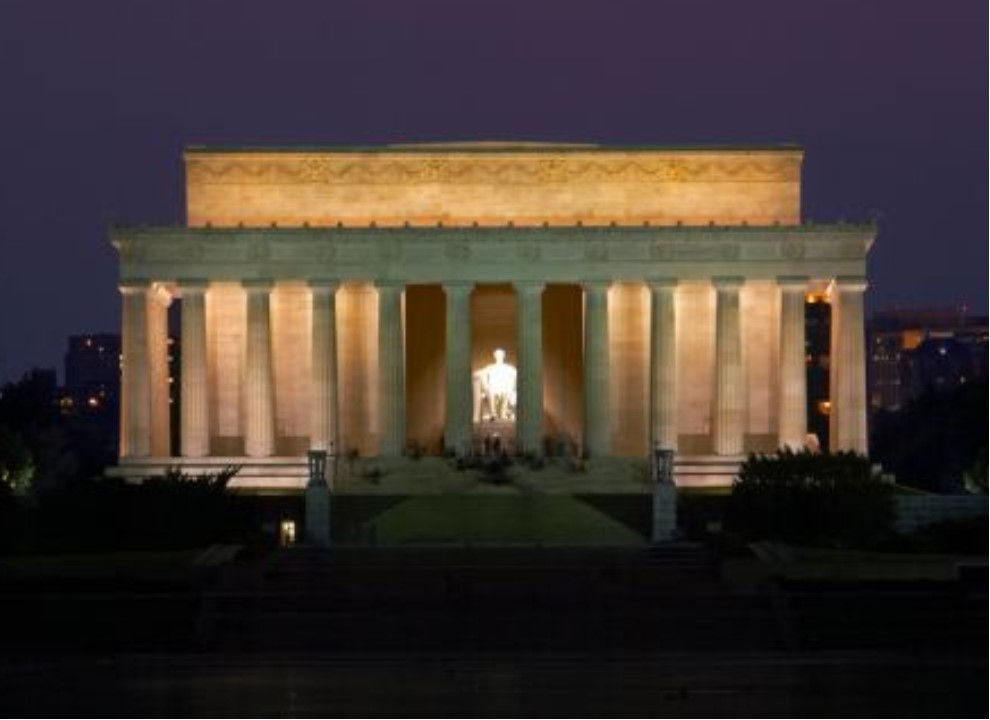 The Lincoln Memorial’s shocking idolatry is testament to the power of American school propaganda in place of history throughout the 20th century.

But the worst part is, they still do.

If you’re a defender of the U.S. Constitution and the norms and nobility of our Founding Fathers, we invite you to launch a TACTICAL CIVICS™ chapter to take your county back from Washington DC hijackers. See our new site HERE for instructions on starting your chapter.

To launch a chapter, send in your request as explained at the bottom of the website home page. No meetings or events the first year; just read the booklets, learn the civics, and spread the good news to other frustrated patriots, to launch their county chapter as well.

As with every other war-sparking hoax after Fort Sumter…Sanford Dole’s Hawaii gambit, the USS Maine sinking, the HMS Lusitania sinking, the Pearl Harbor attack, the hoax of Vietnamese patrol boats ‘attacking’ the USS Mattox, the 9/11 operation…arguing about causes and details of a conflagration after the fact only distracts us from seeking out the true arsonists. But worse still, even seeking out the proverbial arsonists distracts us from repenting our sins that led to God’s having decreed the punishment in the first place. This is the problem with the ‘9/11 Truth’ movement, intent on dissecting and probing conspiracies while, to use Dallas Willard’s term in his eponymous book, the Divine Conspiracy is the one that should inform our exertions.

Why did God decree Lincoln’s terrible shock-and-awe campaign against America, and the counterfeiting of our money, and the destruction of the Militias of the Several States, all of which together have perverted servant-sovereign roles? Try to see those hijackings in light of our godless profligacy as Enlightenment humanism and self-absorption have driven American culture. Perhaps God was protecting us from an even worse self-inflicted fate?

As to the underlying cause, Toqueville had it right a generation earlier. We are certainly not exonerating the South. Slavery was a profoundly grievous sin practiced in the North and South, but vehemently defended by the South. As abortion is today; it is now ten times worse than slavery ever was. A sin so heinous must have a response from God, and He chooses the time.

[I do not mention the rampant sexual perversion of our day as a sin demanding God’s judgment, for Romans 1:19-32 makes it clear that sexual perversion is God’s judgment on people having rejected Him, rather than a sin demanding His judgment.]Americans dare not be angry at God, nor need we be angry at Abe Lincoln personally. As with festering Islam in America today: God’s judgments have sound causes: our collective sins. The LORD decrees such remedies as He sees fit; when we repent our sins, He will withdraw His judgment!

As philosopher George Santayana wrote, those who refuse to learn the lessons of history are condemned to repeat them. So we must view history through this question: what was the lesson to be learned there?

Such data as we have at TACTICAL CIVICS™ comes from the six books and the Internet article linked above. Lincoln was the ideal corporate puppet, as his hero Henry Clay was before him, and as Alexander Hamilton was, at the outset of the new republic. God always has His useful foils and villains in history. Consider Lucifer!

If you have always revered Lincoln, first understand that it is at least unwise and possibly disastrous to revere men. Especially your treacherous servants! Rather than be offended by this ‘attack’ on your former idol, if you still doubt the truth about this brainwashing that the schools did on all of us, read one or more of the books linked in this article. Open your cell door of propaganda that kept us ignorant for five generations.

Of course, you might just refuse to believe the facts of history. You might rather continue loving Abe Lincoln; but then you need to also hate the Constitution as he did. But please don’t blame the messenger for delivering harsh truth. Instead, blame your teachers whose comfortable traditions – whose lies – you prefer to liberty.

About the Author: David Zuniga

David Zuniga is a licensed consulting engineer who has designed and built commercial and residential structures, raised cattle, worked as a book editor, and planted four classical Christian K-12 schools in three states. Over four years beginning in 2006, David refined his AmericaAgain! Declaration with input from constitutionalist radio host Mike Church and popular legal scholar Edwin Vieira Jr., author of Pieces of Eight and of The Sword and Sovereignty, the comprehensive judicial histories of the U.S. Dollar and the Citizen Militia, respectively. David’s book This Bloodless Liberty presents his vision for <a href="http://americaagainnow.com"AmericaAgain!, a perpetual trust and membership organization that – with less than 1% of the American population taking part – can end the 150-year cartel hijacking of Washington D.C., and of our lives. David is a regular contributor on blogs, forums, and alternative media sites including D.C. Clothesline, Freedom Outpost, Liberty Beacon, and Prepper Recon.