Flomaton, AL — The presidential race between a giant douche and a turd sandwich otherwise known as Biden versus Trump, has whipped Americans into a level of divide unlike we’ve ever seen. Families are being torn apart based on their preference for Trump or Biden while random citizens attack and feud with each other in the streets. Protests around the country this year have seen unprecedented violence as many Americans are on edge over which crazy old man will be in the White House come January.

We’ve even seen police officers working in their official capacity use their tax payer funded jobs to promote one candidate or the other. But one cop in Alabama took it over the line this week and allegedly advocated for the execution of Americans if they voted for Biden. In other words, he just seemingly called for the genocide of over 70 million people.

“They need to line ev1 of them and put a bullet in their skull for treason,” Flomaton Police Captain Scott Walden wrote on Facebook. His comments were immediately met with backlash and the Flomaton police department was subsequently inundated with messages complaining about the officer’s comments.

Political beliefs aside, anyone who advocates the wholesale execution of 70 million people is an enemy to all that is good. When a police captain — who is in a position of authority and authorized to use deadly force as part of his job title — this is nothing short of criminal.

After receiving so many complaints, the Flomaton department was forced to respond and say they have since launched an “investigation” into the comments. As for Walden, he isn’t backing down and claims he wasn’t talking about “all democrats” only ones who have committed treason.

But this makes no sense as his comment was a direct response to a comment above it which stated as follows: “The idiots that voted for Biden hated Trump enough to throw the country away. Thank the lying liberals and Democrats news media.” 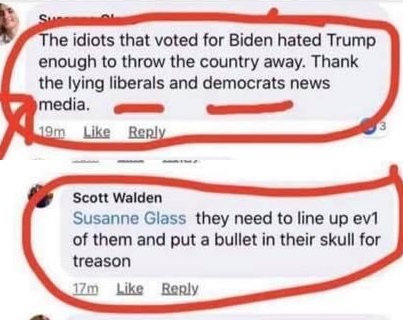 Walden thinks he is now being cancelled based on false information and made the following statement on Thursday:

“Well apparently someone, and I know who you are as well as the others jumping on the “ gonna get them fired “ train is circulating a comment I made about TREASON. The comment even says TREASON but someone has run rampant saying I was meaning liberal n Democrats. Well #1 I don’t care who you vote for, #2 the comment was about treason and what should happen to the ones who are charged for committing treason. So either you trying to stir the pot or you are ok with someone committing treason but not ok with someone who says they should be shot. This is the world we live in.” 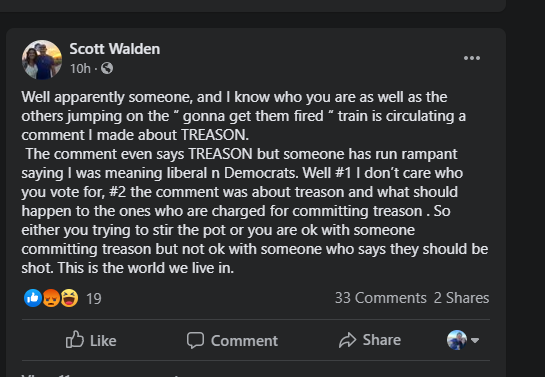 This would make sense if someone was accused in the crime in the comment Walden responded to, but nowhere in the above post was anyone accused of treason until captain Walden accused the “liberals” and “democrats” and “idiots that voted for Biden” of treason.

The Flomaton Police Department treasures the community’s trust, and this is achieved through transparency regarding public information.

The Flomaton Police Department holds officer’s conduct to the highest standard and will continue to do so.

Copies of the comments and complaints have been acquired and retained for Internal Investigations. The outcome of the internal investigation is pending at the time and date of this Press Release. A new press release with be made available later on today’s date.

On November 5th, 2020 the Flomaton Police Department Social Media Platform began accruing multiple complaints in regards to a comment posted by a Flomaton Police Officer. Also, various emails and phone calls have been received by my office. Due to today’s high call volume of complaints, call back has been extremely hard to conduct, I plan to contact all callers back.

When high ranking police officials call for lining people up and putting a bullet in their head, it may be time for a national discussion on how the two party system is tearing society apart. Rest assured, Walden said these things because he is likely surrounded by people who believe the same thing. If he is fired or faces discipline for his comments, he will likely raise tens of thousands in an online fundraiser.

Hopefully, Americans see this election and subsequent calls for mass executions for the clown show that it is and realize that if the fate of the country rests solely on which child sniffing or p***y grabbing creep gets in the White House, the “Land of the Free” no longer exists.

Don't forget to like SonsOfLibertyMedia.com on Facebook and Twitter.
The opinions expressed in each article are the opinions of the author alone and do not necessarily reflect those of SonsOfLibertyMedia.com.
Previous Post:
Question: If Corrupt Government Can’t Properly Count Ballots, How Can It Manage Anything?
Next Post:
The Fall of the House of Pelosi