Call me cynical if you will, but we could all see this coming just as much as we could see Epstein’s death approaching.  However, on Friday, the New York Medical Examiner’s Office declared that Jeffrey Epstein killed himself by hanging.

While details were released that Epstein had several bones in his neck broken, it was questionable as to whether they were broken due to strangulation rather than hanging.

Chief Medical Examiner Barbara Sampson issued a statement Thursday in which she responded to that information: “In all forensic investigations, all information must be synthesized to determine the cause and manner of death. Everything must be consistent; no single finding can be evaluated in a vacuum.”

NPR reported, “Jeffrey Epstein died by suicide in his Manhattan prison cell, according to the office of New York City’s chief medical examiner. The office announced its findings in a statement released Friday afternoon, six days after the wealthy financier was found unresponsive while awaiting trial on sex trafficking charges.”

“Guards on their morning rounds found Mr. Epstein at about 6:30 a.m. on Saturday, prison officials said. He appeared to have tied a bedsheet to the top of a set of bunk beds, then knelt toward the floor with enough force that he broke several bones in his neck, officials said,” according to The New York Times.

However, we’re still not told exactly how that happened, and that is a conclusion reached by the author of the NYT piece, but I yet to see an investigation to demonstrate that, so Ms. Watkins at NYT is just engaging in a theory of her own at this point, something she blasts those of us who questioned the obvious problems in the official story.

Epstein who was to have been under 24-hour suicide watch was taken off and that was an obvious disregard for protocol.  We were told cameras malfunctioned and that guards fell asleep and didn’t check on him properly.

Corrections officers may have falsified reports saying they checked on Epstein as required by protocol, a law enforcement source with knowledge of the investigation told CBS News this week.

A guard in Epstein’s unit was working a fifth straight day of overtime and another guard was working mandatory overtime, several people familiar with the matter told the Associated Press. They spoke on condition of anonymity because the lacked authorization to publicly discuss the investigation.

U.S. District Judge Richard Berman, who is in charge of the criminal case against Epstein, asked the jail’s warden this week for answers about the earlier episode, writing in a letter Monday that it had “never been definitively explained.”

A representative for staff at the Metropolitan Correctional Center said work conditions at the facility have been inadequate for nearly two years. Corrections officers have long complained about being overworked with 60-plus hour work weeks and mandatory overtime.

The warden replied that an internal investigation was completed but that he couldn’t provide information because the findings were being incorporated into investigations into Epstein’s death.

For more on the Epstein story:

What’s also interesting is this photo, courtesy of the New York Post with a caption that reads, “Jeffrey Epstein’s body is moved from New York Presbyterian-Lower Manhattan Hospital on Saturday.” 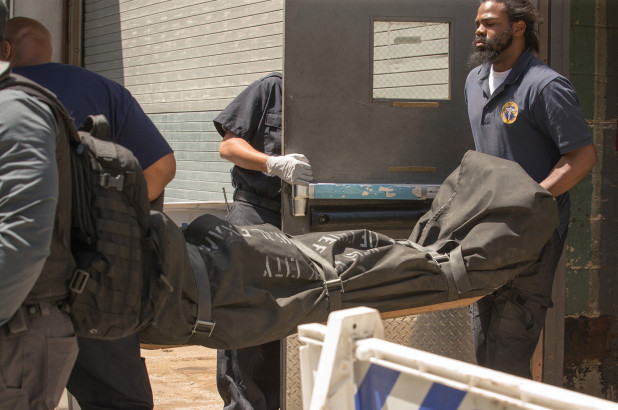 Calls to that very hospital on Saturday to inquire about whether he was either treated there or was in their morgue were met with, “I have been getting calls all day asking whether that person is here or has been here and he has not been here.”

Mr. Epstein’s death is the subject of four federal investigations, including by the Justice Department’s inspector general and the FBI.

Epstein’s death occurred just one day after a plethora of documents were released naming big names in the political world who were involved in sex with underage girls.

Despite the ruling of the Medical Examiner’s Office, I remain unconvinced Epstein committed suicide. Is it possible? Yes, absolutely. It is likely? I seriously doubt it.

Don't forget to like SonsOfLibertyMedia.com on Facebook and Twitter.
The opinions expressed in each article are the opinions of the author alone and do not necessarily reflect those of SonsOfLibertyMedia.com.
Previous Post:
Retired CIA Analyst: “Seth Rich’s Ghost Haunts The Courts”
Next Post:
Now, AOC Wants To Eliminate Cars For “Survival” – Calls It “Scientific Fact”