Are You Ashamed Yet, Americans? Military Leaders Dressed As Women & Now Soldiers Caught Wearing Dog Masks – Where Is The Law To Prosecute?

“Apparently, some people are not paying attention to the crimes these criminals have been responsible for committing (Luke 17:2).”

Americans have somehow or another duped themselves into believing that the acceptance of the sodomites’ abominable lifestyles have nothing to do with a society.  Condoning what the Lord condemns (Leviticus 18:22, 20:13; Romans 1:24; Jude 1:7) is not a good plan.  This, in law, is called “crimes against nature,” and are the crimes of felons.  These criminals do not have the shield, they have the spear to attack anyone and everyone that dare stands against their crimes (Revelation 12:10).

Now, they are leading up, and are accepted into, the ranks of the military?  This is designed to weaken our defenses and, in turn, cause us to become the laughingstock on the world stage (Deuteronomy 28:37). 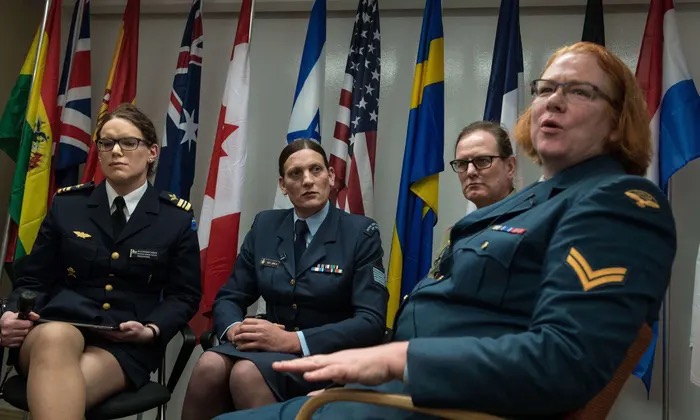 The photos, which have appeared on social media, show male soldiers in uniform, or parts of uniforms, wearing dog masks, leather and chains.

WASHINGTON – Soldiers who wore bondage gear and dog masks in sexually explicit photos while in uniform are under investigation, the Army confirmed Monday.

The photos, which have appeared on social media, show male soldiers in uniform, or parts of uniforms, wearing dog masks, leather and chains. Some of the photos depict poses of submission and sexual acts. Another photo shows a soldier in combat fatigues wearing the dog mask on an airfield.

Some of the photos appeared on Twitter Friday. The soldiers are based in Hawaii.

Internal Pentagon email traffic obtained by USA TODAY shows Army officials believed some of the photos appear to have been taken at a base gym in Hawaii.

In conclusion:  Where is the law to condemn these crimes?  The current administration is supporting this.  Where are the American people to hold their said representative government accountable to the powers that were delegated unto them by “We the People?

Remember, Thomas Edison said, “The strength of the Constitution lies within the people to defend it”  (Isaiah 26:9).