The more data that WikiLeaks releases, the more corrupt the Obama administration and the Department of Justice seem to become.

The first one was an email from Kadzik’s son to Podesta, where the younger Kadzik offered any assistance he could provide to Mrs. Clinton’s campaign.

“I would love to find some time to connect and see if there may be an opportunity for me to help on the campaign.

I have always aspired to work on a presidential campaign, and have been waiting for some time now for Hillary to announce so that I can finally make this aspiration a reality…”

Then just this past month we learned that last October the elder Kadzik enjoyed some close, personal time with John and Tony Podesta. The men had dinner with other Clinton supporters just one day after Clinton’s testimony before the Benghazi committee.

The post-Benghazi dinner was attended by Podesta, Kadzik, superlobbyist Vincent Roberti and other well-placed Beltway fixtures. The first mention of personal contact between Podesta and Kadzik in the Wikileaks dump is in an Oct. 23, 2015 email sent out by Vincent Roberti, a lobbyist who is close to Podesta and his superlobbyist brother, Tony Podesta. In it, Roberti refers to a dinner reservation at Posto, a Washington D.C. restaurant.

Kadzik and Podesta would meet for dinner again several months later before Kadzik’s son would come sniffing around for work.

After no official job offer came through it seems that the elder Kadzik found a way to help the campaign. In October he asked Congress to let him “help” the FBI with their investigation in Mrs. Clinton! 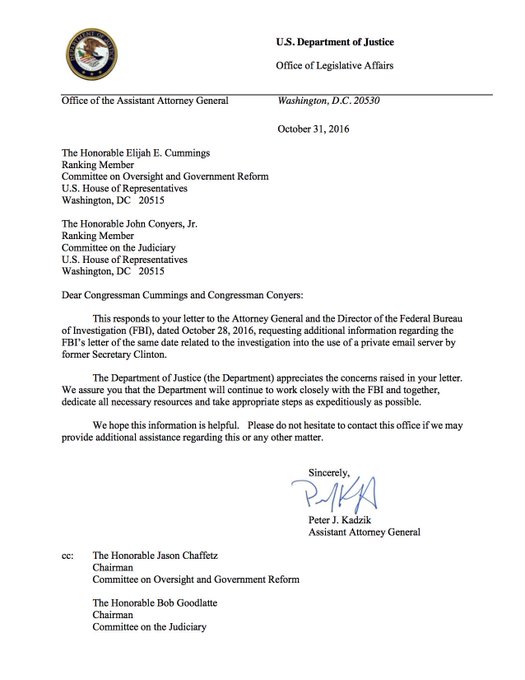 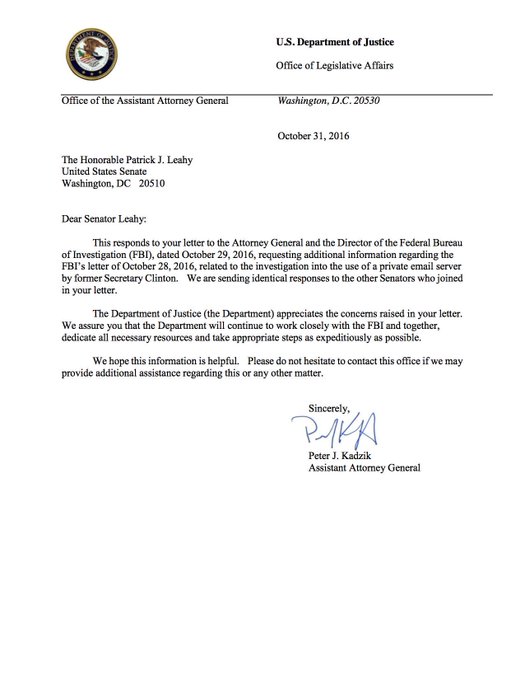 Finally, the most recent piece of evidence that there is something amiss in the Department of (In)Justice was released earlier today and shows Peter Kadzik sharing information about the congressional investigation of Hillary Clinton with Podesta. Kadzik is seen giving Podesta a ‘heads up’ on what Clinton would be facing later in the day.

Is this what the government is supposed to be doing? Does the Department of Justice routinely pass information about an investigation on to the people being investigated?

How can justice be done when the criminals are running the investigations?

Don't forget to like SonsOfLibertyMedia.com on Facebook and Twitter.
The opinions expressed in each article are the opinions of the author alone and do not necessarily reflect those of SonsOfLibertyMedia.com.
Previous Post:
Comey: The Right Thing for the Wrong Reason?
Next Post:
Secret Emails From Hillary Clinton Reveal: There Is A Very Powerful Circle Of People Ruling Over Hillary Who Hate Christians And Who Are Now Executing A Plan To Annihilate Christians And Advance Islam