Sound the alarm! We are closer than ever before in our nation’s history to Congress’s calling a convention under Article V of the US Constitution, where we would likely lose our Constitution. And it’s because of yet another deception from the con-con lobby.

Article V says that “The Congress…on the Application of the Legislatures of two thirds of the several States [now 34], shall call a Convention for proposing Amendments [to the US Constitution]…”

On July 19, 2022, US Rep. Jodey Arrington (R-TX), introduced H.Con.Res.101 and H.R.8419. The former is a purported “call” for a convention.i And the latter directs the Archivist of the United States to “authenticate, count, and publish” all non-rescinded applications and notify Congress of its duty to call a convention, if those applications were passed by at least 34 State Legislatures. 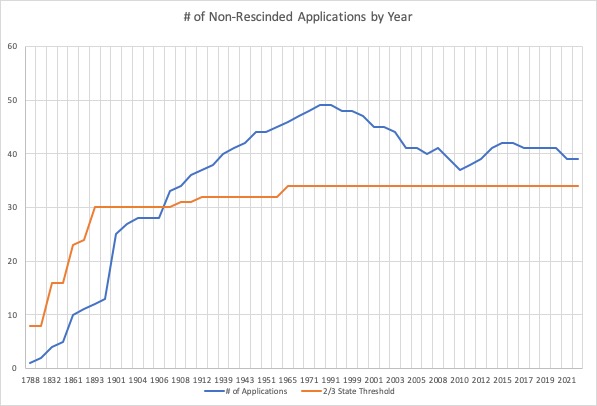 Although counting states from the set of “non-rescinded applications” seems reasonable on its surface, it’s a trick. Every application passed since the 18th century that states hadn’t bothered to rescind would be considered valid under H.R.8419 (or an updated 2023 bill #). And almost 80% percent of those “valid” applications were passed before the 21st Century.

In fact, we hit the 2/3-state threshold for Congress’s calling a convention per H.R.8419 in…(drumroll)… 1907, and we’ve NEVER dropped below the threshold in the 115 years since! The number of states with non-rescinded applications gradually grew from 34 states in 1908 to 48 & 49 States during the 3 decades between 1970 and 2000; and stands at 39 states today due to rescissions. That’s more than enough States to trigger a convention. (See graph).

Raise your hand if you think the Framers envisioned giving the states centuries in which to reach the 34-state threshold—so that by the time Congress called a convention, the American People would no longer remember or care about the issues that triggered the call!

There are common sense ways for Congress to validate applications that would yield markedly different results than H.R.8419. In addition to considering all rescinded applications invalid, Congress could add the following criteria:

Validation by Obsolescence. Common sense dictates that if the purpose for calling the convention has been resolved (i.e. the Civil War, etc.), the applications should automatically expire.

Validation by Age. If a crisis could be remedied by altering or overhauling our founding document, then 34 States should be able to pass applications within, say, a five-year timeframe.iii Consider that 46 States enacted COVID-19 legislation within just 10 months in 2020; and all 50 States did so within the 2021 calendar year.iv

Validation by Type (limited or unlimited). Yale law professor Charles L. Black Jr. (1915–2001) was one of the leading constitutional law scholars of the twentieth century. Black considered all applications asking Congress to call a convention limited by subject, null & void—and that would include most of the applications passed by State Legislatures in the last 45 years. Other scholars agreev:

Depending upon which criteria Congress chooses, there are currently valid applications submitted to Congress from NO states, 39 states, or somewhere in between! Change the criteria, and you’ll change the result.

Mark Meckler, President of “Convention of States (COS),” and the other special-interest lobbyists have been falsely assuring legislators for nearly a decade, that a “runaway convention” is next to impossible. That’s because, they say, only when Congress receives 34 identical or similar applications on the same subject or subjects can Congress call a convention; and, they say, that convention would be limited to the subject of the 34 applications.

But the proponents’ own Article V experts contradict their lobbyists! Attorney and Article V scholar John Cogswell, who admittedly bends over backwards to ensure Congress’s calling a convention, made the following points in a 2018 report to the American Constitution Foundation (ACF)7:

“Congress has a duty to call a convention for proposing amendments without any limitations on the agenda of the convention…” p. 2

“There is no such thing as a ‘limited’ constitutional convention because a convention by definition and practice is a free agency and may propose whatever it likes…” p. 18

“…a convention for amendments could easily amend the Constitution in its entirety and replace it with some other document…” p. 27

Proponents bury the “too-big-to-fail” validation scheme in one bland adjective—“non-rescinded”—in §106c(b) under §1(a) of H.R.8419 and in §1(a)(2)(A) of H.Con.Res.101. But the accompanying press release, including legislative summaries and comments by Rep. Arrington pretend to promote a “Fiscal Responsibility Amendment” and “Article V Accountability.”

H.R.8419 & H.Con.Res.101 are in-your-face evidence that proponents are attempting to manipulate the 34-state count to trick Congress into calling a convention which is inherently illimitable. This is not surprising, coming from the same folks that misled State Legislatures into passing applications for a “limited” convention.

i But since applications from 34 States need to be authenticated before Congress calls a convention, H.Con.Res.101 appears to defy the Constitution.

7 ACF’s goal is to facilitate a “general” convention, where no amendment is declared off-limits in advance by language in the applications. In 2018, John Cogswell conducted a study for ACF and found valid applications from 36 States.

Don't forget to like SonsOfLibertyMedia.com on Facebook and Twitter.
The opinions expressed in each article are the opinions of the author alone and do not necessarily reflect those of SonsOfLibertyMedia.com.
Previous Post:
Can We Say “Fentanyl Attack” Rather Than “Fentanyl Awareness”?
Next Post:
Biden’s ‘Gender-Fluid’ Nuclear Waste ‘Puppy’ Makes a Mess in Minneapolis

About the Author: Judi Caler

Judi Caler is a citizen activist working to defend our Constitution from those who would risk it at an Article V constitutional convention. She serves as Article V Issues Director for Eagle Forum of California.