We’ve reported on the fact that cells from murdered unborn babies and other toxins are blended into the modern idolatrous vaccines to be pumped into human bodies as somehow the protection against plagues and other diseases.  Well, now the Center for Disease Control’s excipients list has been fully documented by the CDC in a bombshell document.  Now, pro-vaxxers, are you really ready to inject yourself with these toxins under the unproven claim that it protects you from the boogeyman “virus”?

(Natural News) Almost no one has any real idea what’s found in vaccines. When they allow themselves to be injected with vaccines, they’re oblivious to the fact that they are being injected with aborted human fetus cell lines or African Green Monkey kidney pus cells harvested from infected, disease primates. (See proof from the CDC, below.)

Yet, astonishingly, the CDC openly admits to all this (and more). In a PDF posted on the CDC website entitled “Vaccine Excipient & Media Summary,” the CDC lists all the excipients currently used in vaccines being injected into adults and children across the United States. The CDC’s list, current as of January 6, 2017, was “extracted from manufacturers’ package inserts,” according to the CDC.

The complete list is found in this CDC document (PDF). In case the CDC removes it — because they’ve been known to suddenly “memory hole” documents they don’t want the public to see — we’ve also posted a copy at the Natural News servers (PDF).

The WI-38 cell line is widely known to be “derived from lung tissue of an aborted white (caucasian) female fetus,” as even the pro-vaccine Wikipedia website admits. As the Coriell Institute for Medical Research explains about the MRC-5 cell line / WI-38:

The MRC-5 cell line was developed in September 1966 from lung tissue taken from a 14 week fetus aborted for psychiatric reason from a 27 year old physically healthy woman. The cell morphology is fibroblast-like. The karyotype is 46,XY; normal diploid male. Cumulative population doublings to senescence is 42-48. G6PD isoenzyme is type B.

The human fetal tissue cells have become such an issue of outrage that even the Vatican has issued a statement concerning their use, in which they address, “vaccines containing live viruses which have been prepared from human cell lines of fetal origin, using tissues from aborted human fetuses as a source of such cells.” You can find the Vatican’s response at this link, in which they discuss the moral and ethical issues of “The principle of licit cooperation in evil.”

No one can refute any of this because it’s admitted by the CDC itself. Here’s some of the PROOF:

First, a CDC document titled “Vaccine Excipient & Media Summary” lists all the vaccine excipient ingredients found in CDC-approved vaccines. The URL for this document is:

As you can see from the screen shots of the document, below, the list of excipient ingredients is “current as of January 6, 2017,” according to the CDC. 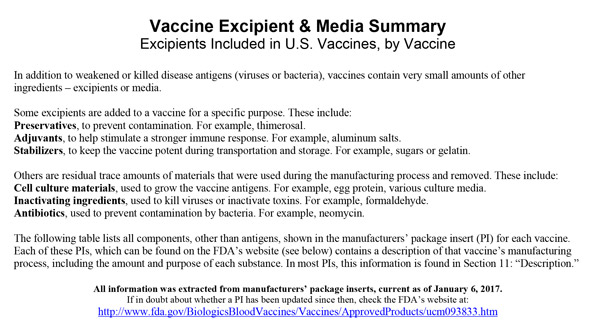 You’ll also see that this document includes a row for a Smallpox vaccine known as “Vaccinia – ACAM2000.” The list of excipients in this vaccine are:

Note the inclusion of African Green Monkey kidney cells in the list. And note carefully that the entire mainstream media is calling Natural News a liar for accurately citing this CDC document.

In addition, this same document also includes an ingredients list for another vaccine called Adenovirus, which contains the following ingredients, one of which is derived from aborted human fetal cells:

As you can see form this list, these CDC-approved vaccines are deliberately formulated with all sorts of highly toxic and questionable ingredients, including acetone, a toxic solvent, aluminum, artificial coloring chemicals, human blood components, dextrose (probably from GMO corn), cow blood components and a whole lot more.

Are these vaccines made with African Green Monkey kidney cells and aborted human fetal cells really used in the United States?

This page from the FDA lists all the vaccines which are “licensed for use in the United States,” and it includes the vaccines containing African Green Monkey kidney cells and the WI-38 aborted human fetal cells.

LIVE Smallpox viruses grown in monkey kidneys, then harvested to be injected into YOU!

In addition to the CDC confirming Natural News is 100% correct through the documents listed above, the vaccine insert sheet itself also describes the use of African Green Monkey kidney cells.

From the insert sheet for the ACAM2000 smallpox vaccine, approved by the FDA in 2007 and still on the approved list:

Click the following link for a backup copy on Natural News servers. 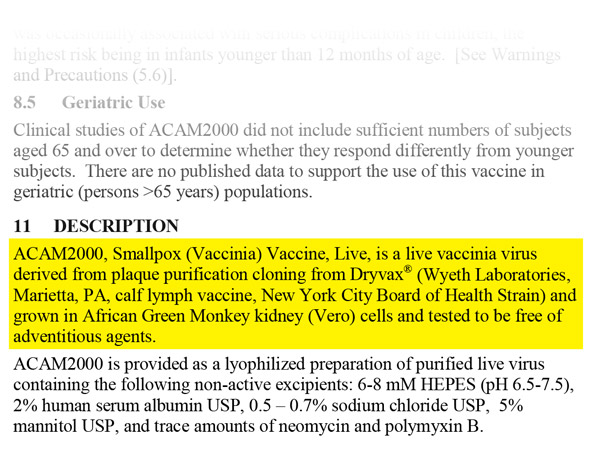 Not surprisingly, this vaccine is known to cause extremely serious and even deadly side effects at a shockingly high rate. Here’s the WARNING box from the vaccine insert sheet, linked above:

Here’s a screen shot of the warnings section of the vaccine insert: 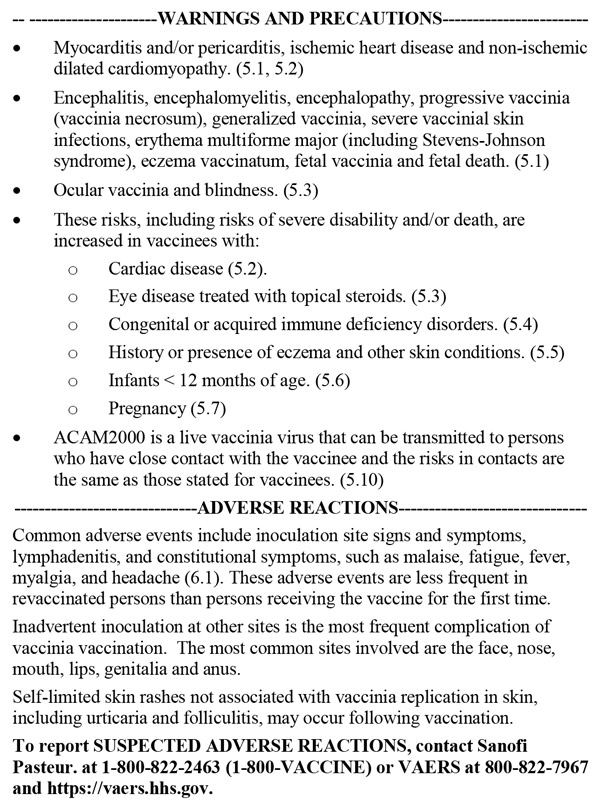 Note the mention of “death” several times, and the shockingly high rate of serious adverse events at 5.7 per 1000 vaccinees. Notice also that this vaccine can cause permanent blindness, spontaneous abortions and severe neurological damage.

Note also that the entire vaccine pushing mainstream media will deny ever word of this even thought it’s printed right on the vaccine insert sheet. This shows you the extreme dishonesty and medical malpractice of all those who push vaccines while falsely claiming them to be “safe.”

Watch for more analysis of the toxicity of these ingredients will be published at Vaccines.news and Natural News.

Here’s what happens to some children when they’re injected with these toxins: 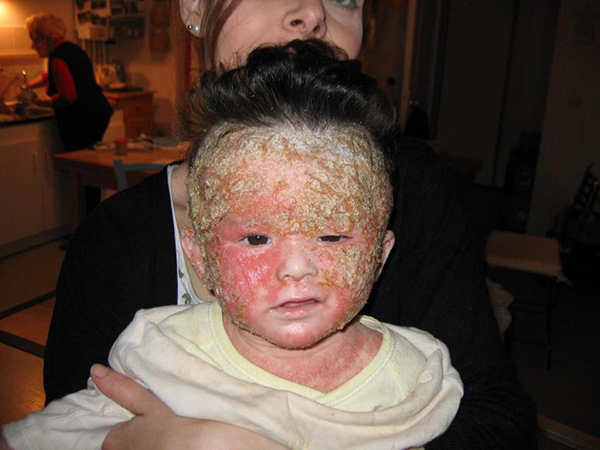 The complete list of vaccine excipients published by the CDC, current as of January 6, 2017

protein other than HA

vero cells [DNA from porcine circoviruses (PCV) 1 and 2 has been detected in RotaTeq. PCV-1 and PCV-2 are not known to cause disease in humans.]

xanthan [Porcine circovirus type 1 (PCV-1) is present in Rotarix. PCV-1 is not known to cause disease in humans.]

Don't forget to like SonsOfLibertyMedia.com on Facebook and Twitter.
The opinions expressed in each article are the opinions of the author alone and do not necessarily reflect those of SonsOfLibertyMedia.com.
Previous Post:
What Is This Governor Doing To Incite Such A Response? Equating Law Abiders Demanding Justice As “Anti-Government” And “Domestic Terrorists” Is Not Going To Work!
Next Post:
L.A. County: Thousands of mail-in ballots sent without the option to vote for president