Vallejo, CA — Willie McCoy was an aspiring 20-year-old rapper whose life was brought to a tragic end in February when six police officers decided to publicly execute him as he slept in his car in the parking lot of a Taco Bell. Now, after nearly six months, and body camera footage showing this execution, the city has ruled the officers “acted reasonably” when they dumped 55 rounds into McCoy in 3.5 seconds.

City Attorney Claudia Quintana says they hired a retired cop, Dave Blake of Brentwood-based Blake Consulting, “with experience in training police officers in the use of force” who found in a report that the officers’ actions that night were “in line with modern training and police practices.”

After the body camera was released in April, McCoy’s family said police edited the video to try and spin it to their official narrative. However, even with their edits, it shows little more than a premeditated death by firing squad.

Sadly, their narrative was successful and it appears that these officers will not be held accountable.

According to KTVU, Quintana said the report details the legal background and the reasons behind Blake’s conclusions. But she said it is important to realize that there is a difference between what force is reasonable from a civil liability perspective and what outcome city officials and the community wanted.

“The death of Mr. McCoy is not the outcome that the City of Vallejo and our community desire,” Quintana said.

“They’re being political now,” said Marc McCoy, Willie McCoy’s older brother. “Look, that’s the way our society is. If your people do wrong, you’re not allowed to say, ‘Hey, we messed up.’ That’s the way we’ve been trained.”

The six officers involved in the shooting were identified as Collin Eaton, Bryan Glick, Jordan Patzer, Anthony Romero-Cano, Mark Thompson and Ryan McMahon. They have all since returned to normal duty.

On February 9 at 10:30 p.m., an employee of Taco Bell called police to let them know a black man was sleeping in his car while waiting for food. McCoy, whose rapper name was Willie Bo was slumped over, asleep on the steering wheel when officers arrived.

McCoy posed no threat to the officers as he was asleep. However, he had a handgun in his lap. Because police don’t usually respect the Second Amendment rights of black men, instead of beeping the siren or using their loudspeaker to wake McCoy up, the responding officers called for backup.

As the video shows, and as the Guardian points out, there are several factors that show the incompetence and insanity involved in this shooting.

Jesus Christ, this video is horrifying. It's a straight-up execution. One of these cops also previously shot another unarmed man, and is currently the target of a separate brutality lawsuit. https://t.co/kzvgCQeq4G

As McCoy was completely surrounded by police, instead of simply waiting for him to wake up, officers opened fire when McCoy began moving. According to the Vallejo police department, officers opened fire, alleging McCoy did not respond when they told him to “keep his hands visible.” But he had no time to even do that.

“The officers told the driver to keep his hands visible, however, the driver quickly reached for the handgun on his lap,” police said in a statement. “In fear for their own safety, the officers discharged their weapons at the driver.”

Watch the video below and see how six cops surrounding a sleeping black man “fear for their safety.”

To justify the sadistic murder caught on video, police released the following statement with the video.

“When viewing the body camera footage, the public should be aware that body cameras do not always reflect what the officer’s eyes see,” police said.

“I am shocked and outraged, as much as one can be by the manner the Vallejo PD executed Willie McCoy,” said the family’s attorney John Burris after the video was released. “The number of shots that were fired was well over 20 by at least three or four different officers.

“I don’t see what he did in order to justify the shooting,” Burris told The Chronicle. “It did not look like he was ever conscious in a real way.”

At least 25 out of the 55 shots hit Willie, and the execution-style shooting from all the cops was enough to instantly kill him. In the image below, at least 24 bullet holes are visible from two points of fire. Even after they killed him, police continued to shout commands at the unresponsive corpse they had just created. 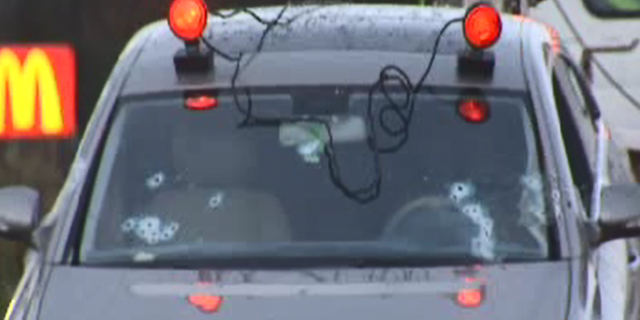 “There was no attempt to try to work out a peaceful solution,” Marc McCoy told the Guardian. “The police’s job is to arrest people who are breaking the law – not take the law into your own hands. You’re not judge, jury and executioner … We’re never going to get over this.”

The Vallejo police department, as well as other departments in the region, have such a bad name that the black community actually feels like they are being hunted.

“No one trusts the police in Vallejo,” said David Harrison, McCoy’s cousin. “We are being targeted … Police have a campaign of executing young black men who fit a certain profile. Willie dressed the part. He represents hip-hop music. They are profiled.”

Indeed, the idea that a sleeping man, who was likely just trying to get some food at Taco Bell, would suddenly wake up and begin firing at police is ridiculous. However, cops in the area have a sinister history when it comes to killing people in their sleep. In fact, McCoy’s death is one of at least three recent police killings in the area in which the victims were asleep.

Also, as TFTP reported at the time, Demouria Hogg, 30, was found unconscious behind the wheel of his car on the morning of June 6, 2015. Forty minutes after police began a stand off with him, he would be shot and killed.

“Police are trained to shoot first and hurt you first,” Marc said. “They do not respect black people. Even when they have a person subdued and their life is not in danger, they continue to be blatantly physically disrespectful. That is just accepted in America.”

Below is the disturbing footage in its entirety.

Don't forget to like SonsOfLibertyMedia.com on Facebook and Twitter.
The opinions expressed in each article are the opinions of the author alone and do not necessarily reflect those of SonsOfLibertyMedia.com.
Previous Post:
Hezbollah Isn’t Just in Beirut – It’s Also in New York
Next Post:
Arrest Made In Murder of Former Republican Arkansas Senator Linda Collins-Smith