“Completely Unsustainable”: Obamacare Destroys Middle Class, Rising As Much as 67%. Just in 2017.

Minnesota is in good company.

Like dozens of other states across the country, its government-mandated health care exchange is facing steeply-rising premiums for individual plans at levels that are both outrageous and completely impossible for the average Middle Class family to pay or keep up with.

And as future rates continue to rise – and it’s going to hurt a lot of people.

Because the system was designed to fail; or, because the government and health care lobbies have so little regard for the people that will actually have to live and die by their rules, the prices are skyrocketing by more than 50% in Minnesota – and by similarly absurd numbers in other states – and the exchange narrowly avoiding collapsing altogether in 2017.

via the Daily Caller:

Minnesota will let health insurers increase their rates by at least 50 percent next year to protect the state’s Obamacare health insurance individual market from “collapse,” the state announced Friday.

The increase in premiums for next year will range between 50 percent and a staggering 67 percent. This comes on the heels of an increase of between 14 percent and 49 percent for 2016. After those increases, Rothman warns, the annual growth rate will be completely unsustainable, showing a desperate need for reform.

Of course, this massive failure – which, like everything else in the Obama Administration, is taking the heaviest toll on the middle class – is by design. Sen. Harry Reid admitted that the plan would collapse, only to usher in a truly-socialized single payer health care system from the ashes.

Regardless of the future of the system, it is hurting middle class Americans now, who are finding health care anything but affordable. Unlike those in the lower ranks of the working poor and the dependent, there are no government subsidies for those who work independently, and make too much for hand outs, but who are still a long way from being able to shell out for the cost of coverage.

All that is definitely no good… the backbone of a vibrant American populace is being undermine and destroyed.

As the Daily Caller notes:

“Middle-class Minnesotans in particular are being crushed by the heavy burden of these costs. There is a clear and urgent need for reform to protect Minnesota consumers who purchase their own health insurance,” Rothman said at the time.

The resulting cluster is driving insurance competitors out of the model, which is becoming increasingly monopolized by one or two providers… and even that won’t last.

Under the problem-reaction-solution disaster model, this crisis will “require” yet another government intervention and takeover.

Here are the expected premium increases for many other states, before Minnesota was added to the list (and don’t forget Texas, also added after this list, which faces a 60% increase): 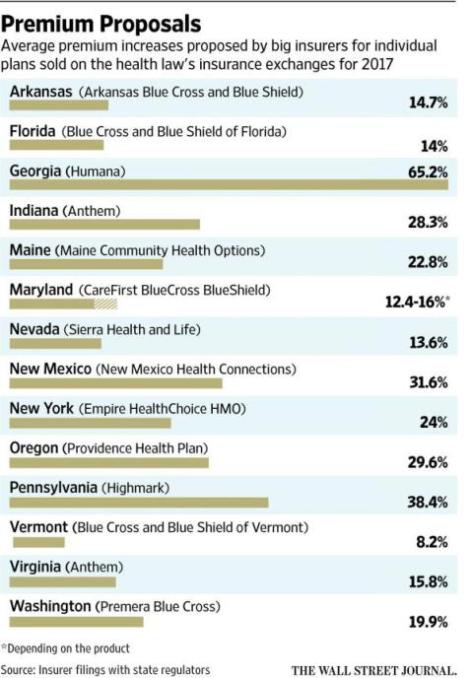 Don't forget to like SonsOfLibertyMedia.com on Facebook and Twitter.
The opinions expressed in each article are the opinions of the author alone and do not necessarily reflect those of SonsOfLibertyMedia.com.
Previous Post:
Guess Which Presidential Candidate’s Foundation Was Shut Down?
Next Post:
Trump Needs to Tell the Whole, Ugly Truth about Hillary Clinton