On one side you see a smiling kid holding a debit card. One the other side is a short sales pitch to parents about how great, fine, and, wonderful this financial service will be for your entire family. 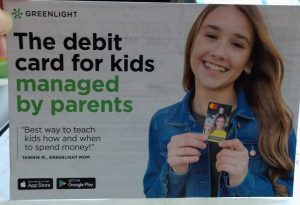 What’s the sales pitch? You can teach your child about finance, you can track their spending, all while you can save money. Wow, what a perfect trio of ‘lessons’. Right?!

Not so fast, this venture capitalistic GA based financial tech company has a ton of hidden agenda in this dastardly, yet, pleasing decoy.

Warriors, usually when we hear ‘green’ in relation to our money, it means good things. At first glance that’s precisely what you are to see when you look at the bevy of services Greenlight Financial Services has to offer. It’s not until you dig into the fine print that you find massive global data tracking systems. It’s in the fine print, that you learn this venture capital based (and working with other such groups) use ESAs (Education Savings Accounts) to control your family, not offer freedom of choice in education.

ESAs have been proven to be a part of the unconstitutional tool called ‘pay as you go’ for success. My fellow Warrior, Alison, who’s article I embedded correctly identified that the Pay as you go scheme is actually an SIB or Social Impact Bond. She’s devoted countless hours of research into how the education landscape in America has been ruined by these types of bonds.

Alison’s also shown how distance learning (really ‘hot’ right now due to COVID-19) is tied into the alignment of our families to the CCSS Machine and globalism. Take the time to search her blog.
Here’s the link to the over 6 pages of ESA research from my archives.

Our U.S. Congress loves the Pay for Success (PfS) model. It’s used in all kinds of ways in the U.S.
ESSA (Every Student Succeeds Act) embedded the PfS with Education Savings Accounts.

It’s not new news that our current President and Sec. of Education are pushing $5 billion in ESAs. However, they call them scholarships. No matter what they are called these funds are being sold as easily transferred to a debit or credit card. That, my followers, is where the agenda begins.

*Note, as you can learn from both Alison’s research and mine, SIBs, ESAs, and PfS are used in K-12 education, trade schools, non-profit higher education institutions, and for-profit higher education. They are attached to CTE (Career Tech Education) apprenticeships/internships; dual/concurrent enrollment; extra curricular activities and services used by homeschool families; anything to tie to job training, especially in (Science, Technology, Engineering, (the Arts,) and Math) STEM/STEAM fields,  and more. SIBs are being used to transform not only education, but our entire communities!

Warriors, simply stated, VC has zero business in education, yet, due to the rise of public-private overreaches in America, the global groups participating in VC (most are based in Silicon Valley, USA), VC has made it its business to horn in on education.

Back in 2014, I showed you the GSV’s (Global Silicon Valley) point system to totally erode America’s infrastructure so that they could reshape our nation. VC, as well as PfS, remove the government control and shift it to private control. REGARDLESS of what or whom is being set up to become controlled!

Warriors, Greenlight Financial Service is tied to the, based in NY. Did you know this bank was created in 2001? The President of the NY CFSB, at that time was Martin Hyman. His ties take us back to Goldman Sachs. However, as much as that ties the Bank to the CCSS Machine, it’s the tie to GE Capital that is the bigger issue. GE Capital is a part of the Venture Capitalists! (Below, notice Edcast).

Do you know what family now backs this Bank (since 2011)? The Ghermezians. Syd, is listed at the CEO. The Ghermezians are from Iran and relocated to Canada. They also have a huge financial presence in the USA. While you may not know who this family is, you may recognize the Mall of America (MN), they own it. The NY Bank mentioned here, is owned by them.

Greenlight is NOT owned by the Ghermezians, but is tied to the family friendly (so Greenlight sells themselves as) Ga based financial technology service.

1) From 2019, how GE (General Electric) has been in on a toxic education reform bandwagon before they jumped on the CCSS Machine’s bandwagon. Somewhat related, is this 2019 report of GE Capital trying to get out of Silicon Valley. GE Capital Ventures is also investing in AI (artificial intelligence) and Blockchains (which tie personally captured data to SIBs and create trackable, chunkable credits to slot us as human capital. See Alison’s blog for more on blockchains and SIBs.)

2) From 2019, how Nextdoor (another seemingly harmless service) is rooted in the GSV (Global Silicon Valley). Some school districts use this technology based service.

3) To learn how Greenlight’s co-founders got connected to education and technology, read this GA based article.

From the 2014 article of mine, this image detailed the 4 sections the GSV was using to transform education. While wresting it out of the federal government’s hands might be a good thing, their privatizing it to their gain/control is a very BAD thing. Education is supposed to be a parent-led, State by State-based decision, funding, and, control.

After all, Warriors, what companies stand to make the most money during and after COVID-19 in education? It’s the digital tech companies and their funding suppliers!

Don't forget to like SonsOfLibertyMedia.com on Facebook, Google+, & Twitter.
The opinions expressed in each article are the opinions of the author alone and do not necessarily reflect those of SonsOfLibertyMedia.com.
Previous Post:
Massachusetts: “Pedophile Hunter” Catches Police Chief Trying To Have Sex With 14-Year-Old Boy (Video)
Next Post:
Facebook Not Only Attacks The Truth About COVID-19, But Now It’s Banning Protests Against Lockdowns

Millions Will NOT Be Getting Those Automatic COVID Relief Checks — Here’s What Went Wrong
February 26th, 2021 Clash Daily