Below is a screenshot of the Focal Point Facebook page shortly after I posted the daily prayer that I provide for our Facebook followers. 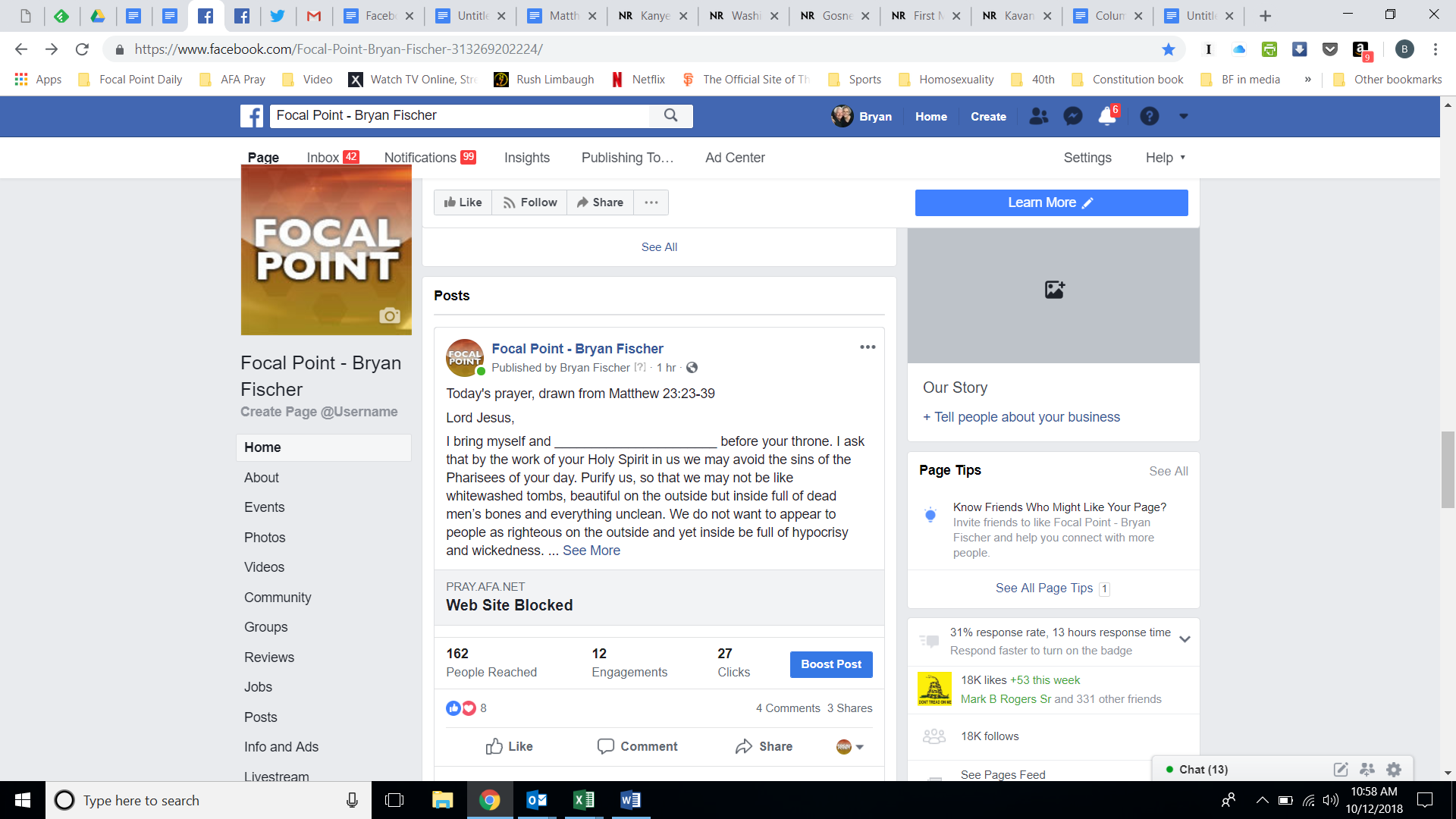 You will notice, immediately below the posted prayer, in boldface letters, “Web Site Blocked.” The website in question, as you can see right above the “The Web Site Blocked” message, is “pray.afa.net” That is the link to AFA’s prayer website, which features a Scripture passage for each day and a fresh prayer formed by using the words of the passage for the day.

In other words, the website contains nothing but prayers that are, primarily, nothing but the word of God converted into prayers. This provides our Facebook users with the opportunity to develop the art of praying Scripture back to God.

This is a step into religious discrimination and censorship that is beyond the pale, even for Facebook. Religious liberty is the cornerstone of the American experience. This nation was formed by people who came to our shores specifically because of the promise of religious freedom. Thus Facebook, by now turning its censors loose to block prayer itself, is acting in a fundamentally and profoundly un-American way.

Facebook, of course, is a private company so it can censor anybody it pleases. But we demand an explanation from Facebook for this blatant act of anti-Christian bigotry and discrimination. If they tell us it’s not their fault, it’s just one of their algorithms, then it’s time to change their algorithms – today. If they tell us it’s a rogue censor, then it’s time to replace him with someone who believes in freedom of religious speech and is a little more open-minded and tolerant. If they tell us that Facebook’s policy is to deliberately censor religious speech, and even prayer, it’s time for them to change their policy.

Not only is Facebook landing on prayer like a falling safe, they have targeted other website platforms provided by the American Family Association, including, for instance, our main website, afa.net. They have also restricted users from seeing our opinion site, The Stand, where conservative Christians can find analysis and commentary on contemporary issues.

The targeting of AFA seems random, and even seems to be floating at times, in what appears to be an effort to systematically but unpredictably interfere with our ability to use our various platforms to their fullest extent. We have noticed, over the last six months or so, an alarming drop in Facebook traffic and interaction, a clear evidence that, to put it bluntly, Facebook is messing with us. And for no other reason than that we are a conservative, faith-based organization.

To this point, Facebook has failed to respond to our inquiries and our demand for an explanation. This is totally unacceptable. Mark Zuckerberg told Congress and the whole world last year that, “we should be a platform for all ideas.” It’s time for Mr. Zuckerberg to prove to us all that he wasn’t lying through his teeth.

Undercover Video Captures FDA Employee Claiming Minorities Should Be Given The Experimental COVID Shot Against Their Will
September 23rd, 2021 Sons of Liberty Media