In 2008, I broke the groundbreaking news story of a massive network of foreign entities (some terror-tied) donating to then candidate’s Barack Obama’s campaign. I wrote extensively on it and devoted chapters to it in my first book, The Post-American Presidency: The Obama Administration’s War on America

. No media covered it, no federal agency prosecuted it.

I submitted everything to the FEC and David Keene, then Chairman of the ACU, but it came to nothing.

Obama received illegal foreign campaign contributions from the terror statelet of Gaza. Among the “donors” Palestinian brothers inside the Hamas-controlled Gaza Strip were listed in government election filings as having donated $29,521.54 to Sen. Barack Obama’s campaign. There was no mass media coverage. None. But ABC News is all over a fake news contribution story about President Trump. 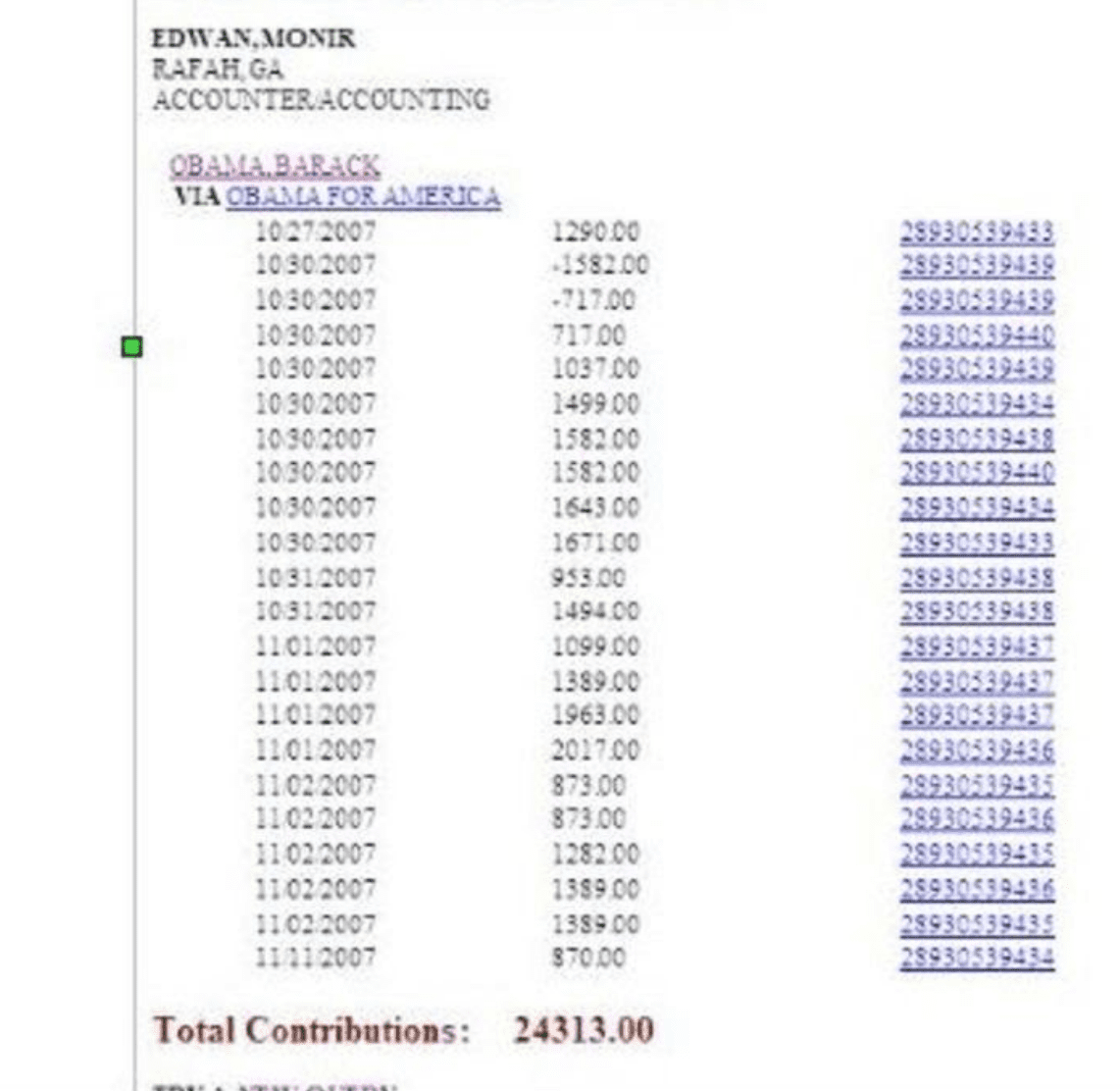 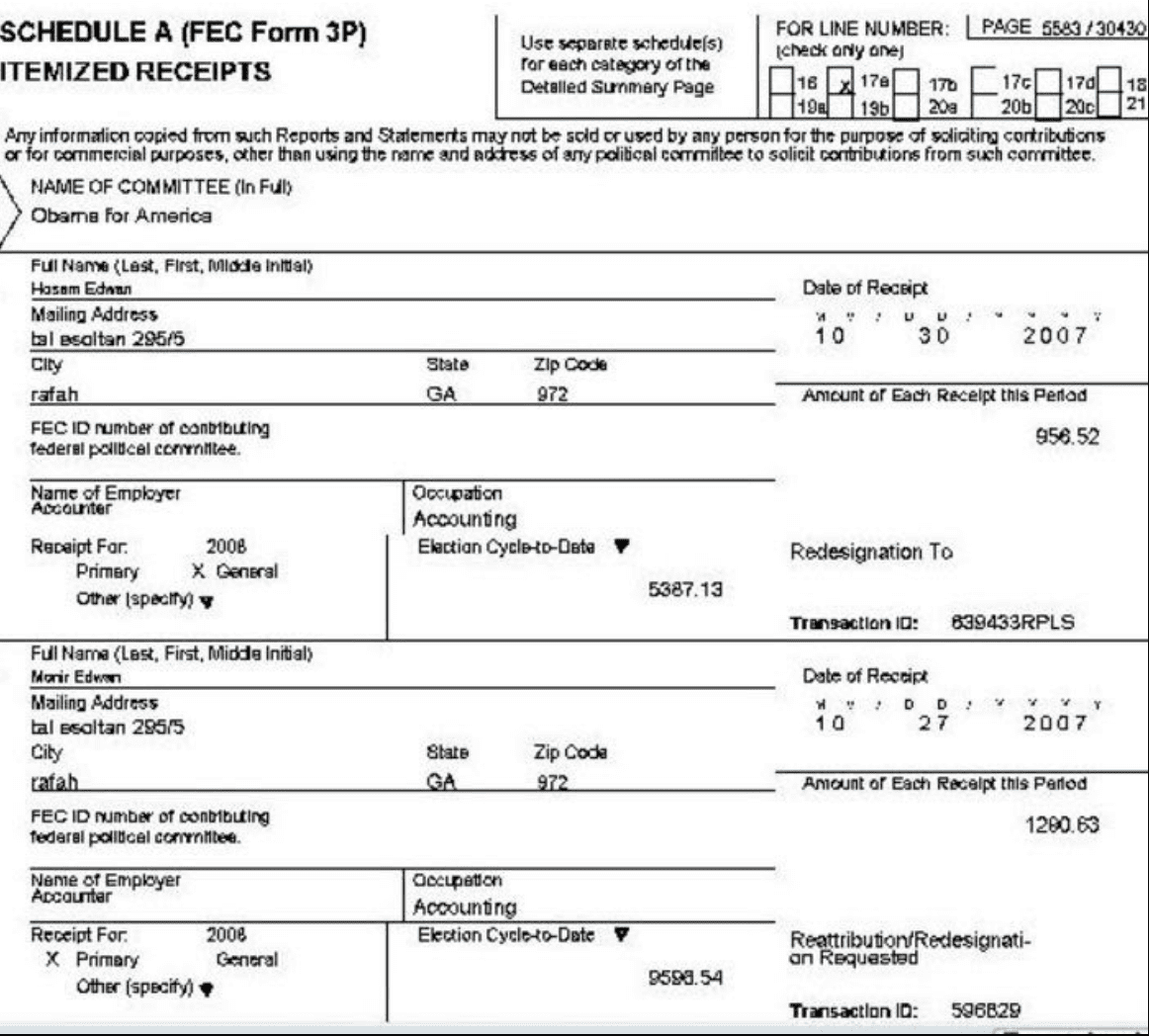 Obama’s 2008 campaign finance records are full of riddles, mysteries, and unanswered questions. Contributing nearly $25,000 to the Obama campaign was Monir Edwan, who was listed on FEC documents as contributing from the city of Rafah in the state “GA.” Georgia? No – there is no Rafah in the Peach State. Monir Edwan sent money to Obama from Rafah, Gaza.

Rafah is a Gaza “refugee” camp.

The Federal Election Campaign Act (FECA) “prohibits any foreign national from contributing, donating or spending funds in connection with any federal, state, or local election in the United States, either directly or indirectly. It is also unlawful to help foreign nationals violate that ban or to solicit, receive or accept contributions or donations from them. Persons who knowingly and willfully engage in these activities may be subject to fines and/or imprisonment.”

Yet no one has found it noteworthy that Barack Hussein Obama himself appears to be in violation of this statute.

According to the FEC, contributions to the Obama campaign from three brothers, Osama, Monir and Hosam Edwan, all from Rafah, totaled $33,000.  And they weren’t alone. Al-Jazeera reported on March 31, 2008, that Gazans were manning phone banks for the Obama campaign.

The FEC (Federal Election Commission) never took any action on all  the charges about Obama’s eligibility and foreign campaign donations? Longtime Atlas readers remember the blockbuster stories I broke during the early summer 2008 on illegal  contributions, foreign contributions, contributions from Hamas-controlled areas in Gaza, and non-existent donors (scroll Obama’s Foreign Donors: The media averts its eyes)

Those interviewed included longtime Trump friend and confidant Thomas Barrack, who oversaw the fundraising effort, as well as individuals familiar with the massive inaugural fund, according to sources with direct knowledge.

Barrack, a real estate investor, has long been described as a Trump “whisperer” whose close friendship with the president landed him a prime appearance during the GOP convention the night Trump accepted his party’s nomination.

The billionaire runs a fund with hundreds of millions in real estate and private equity holdings in the Middle East. Barrack oversaw the largest inaugural fundraising effort in U.S. history, bringing in $107 million – more than double what President Barack Obama raised for his first swearing-in festivities.

According to a source who has sat with the Mueller team for interviews in recent weeks, the special counsel is examining donors who have either business or personal connections in Russia, Saudi Arabia, the United Arab Emirates and Qatar. Several donors with those ties contributed large sums to the non-profit fundraising entity – gifts that topped out at $1 million dollars, according to public records.

Neither has been accused of any wrongdoing.

Blavatnik is a billionaire with dual U.S. and British citizenship who has extensive business ties in Russia. Blavatnik gave $1 million to the inaugural fund through his company, Access Industries, according to FEC records. Companies are prohibited from giving donations to political candidates, however, donations to inaugural committees are not considered donations to candidates.

A spokesman for Blavatnik did not respond to questions from ABC News.

Intrater serves as the CEO of Columbus Nova, an investment company based in New York. FEC records show Intrater made a $250,000 donation to the Trump inauguration committee in early January 2017.

Following the donation, he and Vekselberg attended Trump’s inauguration, according to published reports. Also in 2017, Intrater gave another $35,000 to Trump Victory, the joint fundraising committee for the Trump campaign and Republican party. Of that, $29,600 went to the Republican National Committee.

Intrater has not responded to inquiries from ABC News.

Vekselberg, a Russian national, was questioned by the Mueller team after stepping off his private jet at a New York-area airport, The New York Times reported earlier this month. Vekselberg has also been in the headlines this week after the attorney for adult film star Stormy Daniels, Michael Avenatti, alleged that Veksleberg directed payments to a company formed by Cohen’s totaling $500,000.

The alleged payments, made by Columbus Nova — the firm led by Intrater — were listed in a seven-page document prepared by the law firm representing Stormy Daniels.

Daniels alleges she had a sexual encounter with Trump in 2006.

The document outlines what it claims are $4.4 million in payments to a corporate entity set up by Cohen shortly before the 2016 elections. The payments allegedly come from both obscure companies and well-known brands — foreign and domestic — including AT&T. Several of those companies have extensive business before the U.S. government.

The alleged payments continued until earlier this year.

Columbus Nova said in a statement earlier this week that the firm’s work with Cohen was not improper.

Don't forget to like SonsOfLibertyMedia.com on Facebook and Twitter.
The opinions expressed in each article are the opinions of the author alone and do not necessarily reflect those of SonsOfLibertyMedia.com.
Previous Post:
The Media’s Conspiracy Theories Are Becoming More Senseless
Next Post:
NFL Proves Loyalty to Big Pharma, Forces Players to Use Opioids Instead of Cannabis