German scientists published a peer reviewed study on autopsies of twenty five people who had died suddenly. Reports of otherwise healthy people suddenly collapsing and dying need to be investigated. But the very agencies responsibility for such a task are the least interested. Just the opposite. They don’t want to know. And worse still, they don’t want people to know.

Medical pathologists from Heidelberg University Hospital in Heidelberg, Germany have published direct evidence showing how people found dead after mRNA vaccination died. As this team of six scientists explore in their study, these mRNA-vaccinated patients suffered from heart damage because their hearts were attacked by their own immune cells. This autoimmune attack on their own heart cells then leads to their damaged hearts beating so many times per second that, once the tachycardia unexpectedly started, they died in minutes. (The Epoch Times)

And still the Democrats are pushing this poison – on our children.

A peer-reviewed study by leading German pathologists showed autopsy findings in people who died unexpectedly within 20 days of getting mRNA vaccine showed myocardiocyte destruction or damaged heart muscle cells, and clearly visible lymphocytes that are not supposed to be there.

Dr. Lutchmedial #diedsuddenly in his sleep months after this quote. pic.twitter.com/sLxzj7up32

16 year olds having strokes is not, and never was, normal.

This is what happens after you mass inject the global population with an experimental mRNA technology.

The post vaccine fallout is just getting started. #diedsuddenly pic.twitter.com/fme2ReR7tP

We're almost up to 100 dead vaccinated Canadian doctors & not a word from the media.

Imagine how they'd be reacting if 100 people died suddenly in a mass shooting?#DiedUnexpectedly pic.twitter.com/1CMr7iCekE

She was fully 💉💉vaccinated, and is reported to have died of lung complications. pic.twitter.com/Y0hOjAnVjP

When a young girl passes away a few days after the Pfizer jab with blood clots in her legs and arms, why is the vaccine not investigated in relation to her death? An Independent Safety Monitoring Board are usually convened to supervise provisionally approved drugs during trials. https://t.co/tWsroirQnB

" How come all of a sudden these things are happening in so many people" 85% of the people had these white fibrous clots."#diedsuddenly pic.twitter.com/Eub35YJGVn

WOW: ABC has lost TWO producers in the last week:

Erica Gonzalez was an ABC producer that #diedsuddenly along with Dax Tejera. 💉💉

ABC has been in litigation for denying religious exemptions for the 💉

They were requiring ALL ABC employees to be injected💉💉— no exceptions. pic.twitter.com/CBT03irctm

Tolerance is a good thing in most aspects of life. But when it comes to the immune system, artificially juicing up the body to create antibodies with long-term tolerance to a pathogen is a recipe for disaster. Amid thousands of papers on COVID and the vaccines, a new German paper published in Science Immunology should be the headline story this week. Although the subject matter is very dense, the implication of it is that the Pfizer shots (and possibly other mRNA spike protein shots) caused the immune system to misfire, thereby creating an endless feedback loop of viral immune escape, perpetuating the pandemic in the macro, and creating immune suppression for the individuals who received them.

The vexing question of 2022 is why the virus is even still with us to this day. Why is it that so many countries in the Pacific Rim that did so well in 2020 and 2021 now have a bigger problem in 2022 with less virulent strains of COVID? Why does it appear the pandemic will never end and so many people continue to get the virus multiple times? None of this is normal.

Wherever you turn, the most vaccinated countries are not only experiencing rampant side effects from the shots, but worse outcomes from COVID itself following their endless booster campaigns.

During the last six months, 98% of all reported covid deaths have occurred in nations where more than 1 vaccine dose has been administered per person.

Essentially no deaths are occurring in the unvaccinated nations. pic.twitter.com/QIG7CyMJwc

Portugal is the most vaccinated nation in all of Europe (95% vax’d, 70% boosted) and yet just as many people are dying now as in 2021 and significantly more people than in 2020 (when no one was vax’d and no one had immunity and covid was more virulent).

But even more telling than an epidemiological comparison of one nation to another is a comparison of outcomes within nations themselves between pre- and post-vaccination/booster campaign. Prior to the mass vaccination, two parts of the world largely escaped excess deaths from the virus: continental Africa and the Pacific Rim nations. Yet whereas Africa flatlined in terms of COVID deaths throughout 2021-2022, countries like Japan only experienced meaningful numbers of deaths after the mass vaccination program.

Here is a chart of the daily COVID deaths per million in Japan, a country that is super vaccinated (and mask-obsessed). 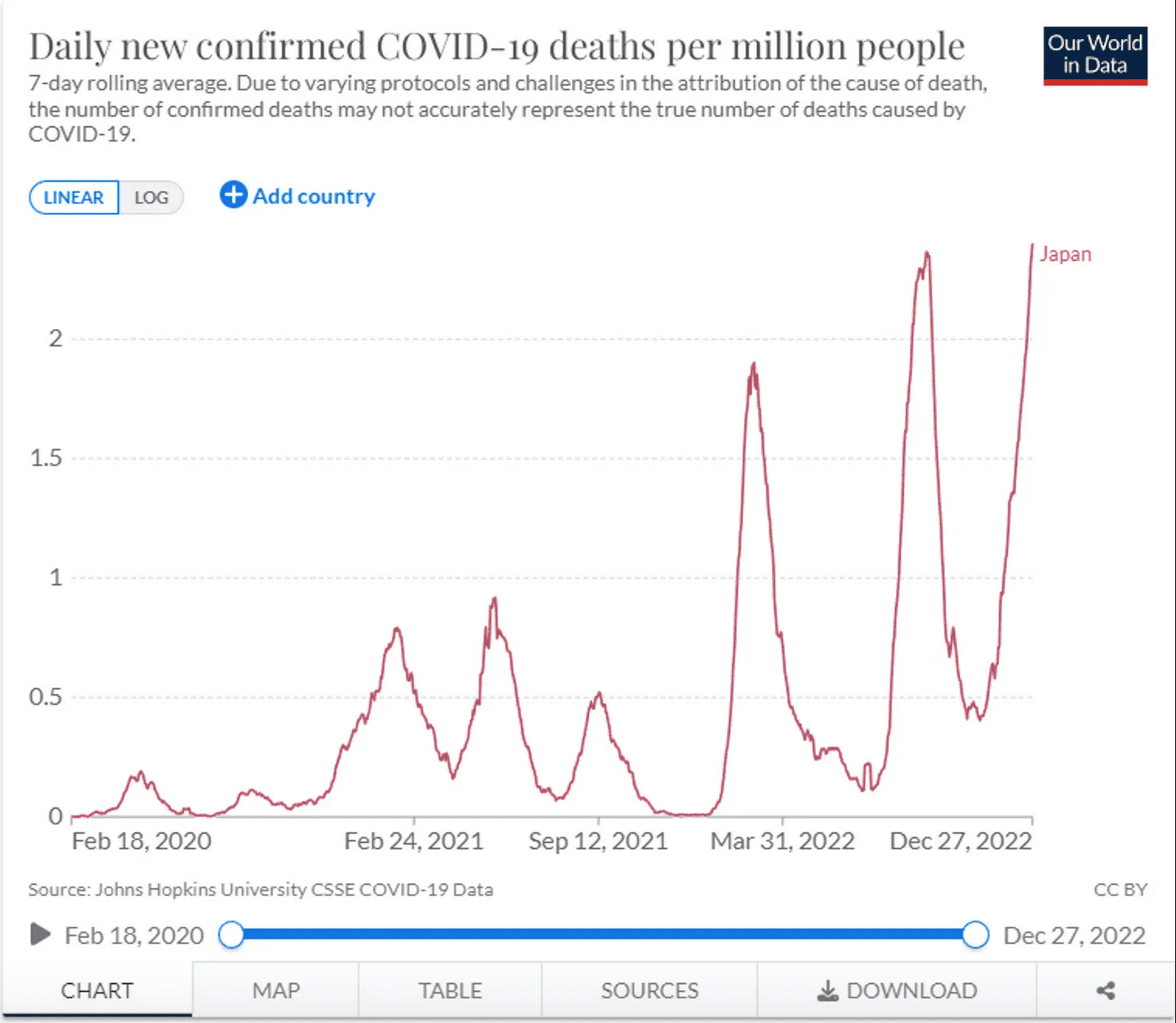 Don't forget to like SonsOfLibertyMedia.com on Facebook and Twitter.
The opinions expressed in each article are the opinions of the author alone and do not necessarily reflect those of SonsOfLibertyMedia.com.
Previous Post:
New Text & Email Evidence: Pelosi Staff Secretly DECREASED Security at US Capitol for Jan 6 While Pelosi Organized Film Crew For That Day
Next Post:
Blatant CIA-Controlled Mockingbird Media Propaganda: Ukraine Battles Russia For Miss Universe Title