Those paying attention to the current situation regarding the establishment’s control on the narrative around Covid-19, have watched as anyone — including esteemed experts in the field — are censored into oblivion for attempting to put forth information that challenges the status quo. For the first time in recent American history, merely talking about alternative treatments for a disease is met with mass censorship by big tech. This is diametrically opposed to actual “science” and the opposite direction in which a free society should be moving.

One of the people who has been censored the most is Robert W Malone MD, MS who is one of the inventors of mRNA & DNA vaccines. Dr. Malone has been outspoken about the way the establishment system is handling, or rather mishandling, the covid crisis.

His Twitter account had grown to over a half million followers last week before the platform decided that his alternative views on the pandemic were a danger to the narrative. So they banned him.

Instead of standing up for the free exchange of ideas by experts — which is how science works — the left cheered for Malone’s censorship, calling him a kook while celebrating the tools of tyrants.

Before Donald Trump came into office and caused mass hysteria over Russia, the left used to stand for freedom of speech. However, the flamboyant tyrant in the White House quickly eroded their respect for rights. Then, in 2020, Covid-19 arrived and the censorship campaign switched into overdrive.

The left — armed with their militant “fact checkers” whose opinions are wielded like swords against anyone who challenges the official narrative — became the regime of authoritarian information controllers. After all, if you challenge their messiahs like Dr. Fauci, you challenge science itself — facts be damned.

So what happened? Why did the left go from championing free speech for years — even supporting the speech of neo-nazis — to rabidly demanding the silencing of those who attempt to challenge team doom? Dr. Malone and others have a theory, and it’s called mass formation psychosis.

“When you have a society that has become decoupled from each other and has free-floating anxiety in a sense that things don’t make sense, we can’t understand it, and then their attention gets focused by a leader or series of events on one small point just like hypnosis, they literally become hypnotized and can be led anywhere,” explained Malone on a recent interview with Joe Rogan.

Malone then described how “leaders” can exploit this situation: “And one of the aspects of that phenomenon is that the people that they identify as their leaders, the ones typically that come in and say you have this pain and I can solve it for you. I and I alone. Then they will follow that person. It doesn’t matter whether they lied to them or whatever. The data is irrelevant.”

On Joe Rogan, Dr Robert Malone suggests we are living through a mass formation psychosis.

He explains how and why this could happen, and its effects.

He draws analogy to 1920s/30s Germany “they had a highly intelligent, highly educated population, and they went barking mad” pic.twitter.com/wZpfMsyEZZ

After Dr. Malone explained this concept of mass formation, developed by Dr. Mattias Desmet, professor of clinical psychology at Ghent University in Belgium, internet searches for “mass formation psychosis” began to exponentially increase. It appeared that Google, at one point, even attempted to skew the returned results, and it appears it is still happening.

Dr Malone broke the algorithm and now Google is struggling to manually edit the results when you search for mass formation psychosis. Try it. Never seen this before. pic.twitter.com/kBKBGjM8bB

Now, when you search for the phrase on Google, it returns articles by mainstream media outlets, like Forbes who took to making fun of Malone for even daring to suggest that this was the case. Apparently, large swaths of people calling for the unvaccinated to be put into camps, denied healthcare, and even killed, is not psychosis. It’s normal.

It’s normal to completely dismiss the massive amounts of data in front of us, and instead opt for a fear-driven narrative that has caused suffering of epic proportions in populations whose risk of complications from covid are almost non-existent. 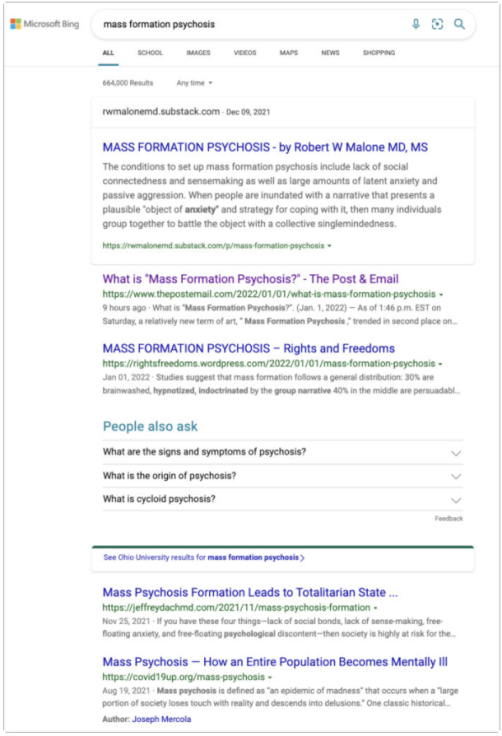 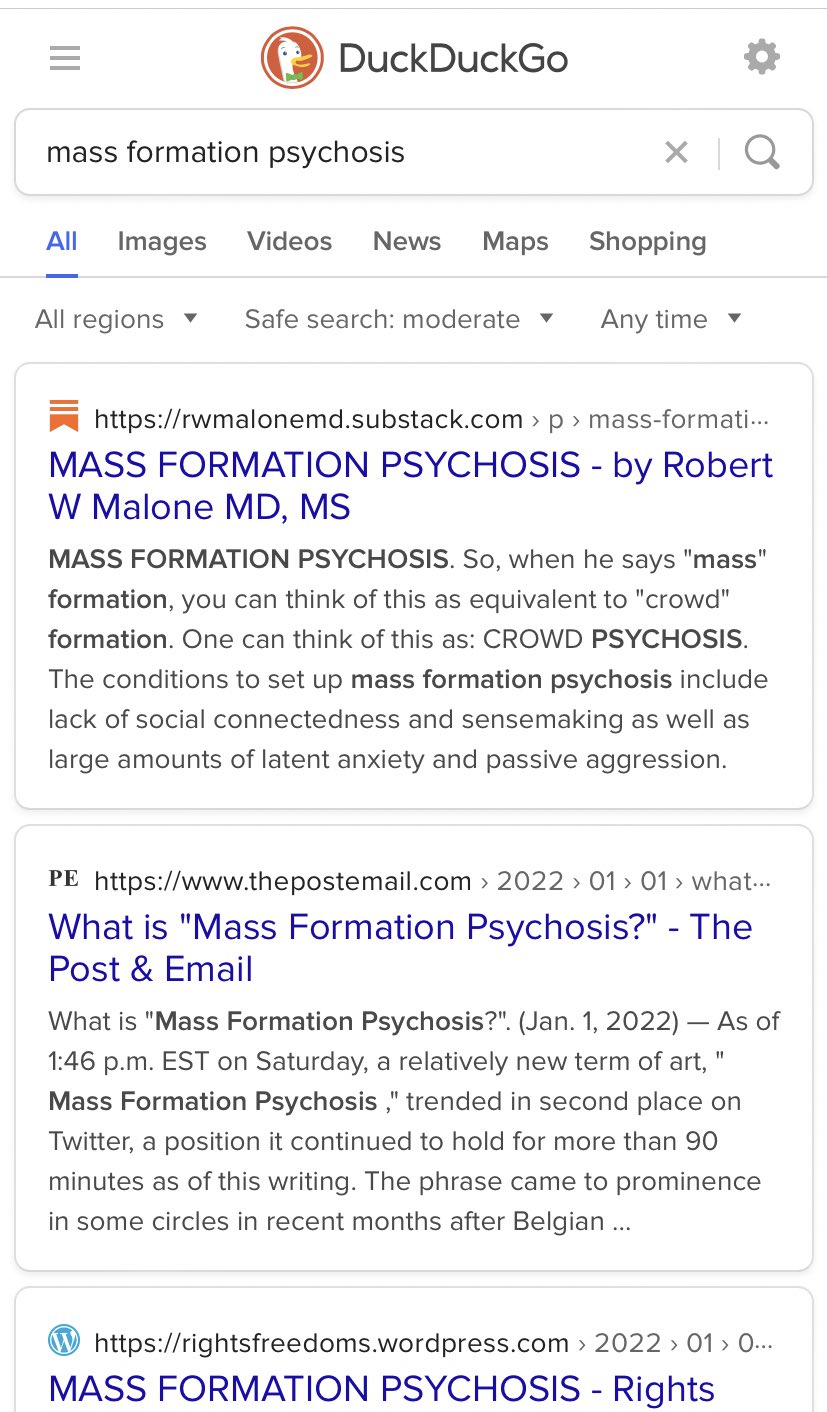 Though Google is hiding it and Forbes is downplaying it, mass formation psychosis is a plausible explanation for what is going on right now in Western society. According to Desmet, there are four basic conditions which need to be met for a society to be vulnerable to mass hypnosis. And we are meeting all of them.

The first condition is a lack of social bonding. Over the last five years, Americans have been torn in half by the Trump phenomenon and when covid arrived it pushed people into isolation that much further. As fearful individuals pine away in their homes with no social interaction, their lack of community has fallen to a depressing level.

The second condition for mass psychosis is a lack of meaning or purpose in one’s life. Desmet cites a Gallup poll done with people in 142 countries in which 63% of respondents admitted to being so disengaged at work that they were sleepwalking through their day, putting time but not passion into their work. What’s more, a recent poll of young people in the UK revealed that 89 percent of those aged 16-29, “believe that their lives have no meaning or purpose.”

Free floating anxiety is the third condition for mass psychosis and one need only look at the millions of prescriptions for anti-anxiety/depression medications in the country to realize that it is rife throughout the west. As Desmet points out, if people feel socially isolated and that their life has no meaning, their anxiety isn’t connected to a mental representation. This free-floating anxiety then creates deep psychological discontent.

Finally, the fourth condition needed for mass psychosis is prevalent levels of frustration and aggression. A quick stroll down Twitter lane and the amount of overt societal aggression becomes exceedingly clear. It has even manifested countless times in real life as pro-maskers attack anti-maskers and vice versa. The term “covid Karen” exists for a reason.

One can reasonably argue that all four of these condition are easily met currently, which is fomenting a mob psychology. And as Desmet reminds us, this psychological phenomenon explains why so many have bought into a clearly illogical and unscientific narrative, and why they are willing to participate in the prescribed strategy like quadruple masking — “even if it’s utterly absurd,” Desmet says. “The reason they buy into the narrative is because it leads to this new social bond,” he explains. “Science, logic and correctness have nothing to do with it.”

Sound familiar? How many times have people continued to cite the “experts” whose narratives have been proven false over and over again. How many times have wee seen people blindly follow these known liars simply because these liars offer them solidarity in their mutual psychosis.

Even the FDA has fallen into this formation as they push vaccinations for 5-11 year old children despite no clear emergency for children. In spite of the lack of emergency, because these new community bonds have formed and team doom is under mass hypnosis, millions of parents eagerly await to inject their children with a vaccine that hasn’t even been approved for them.

What, besides mass psychosis could explain the mainstream media scoffing at the 400,000 adverse reaction events from the covid vaccine reported to VAERS in the last year? How is it that these reported events, including 20,000 deaths posted to the system are written off as immediately unreliable — despite all previous data showing that it is likely a vast undercount?

How is it that mainstream media and their supporters in team doom can justify myocarditis in children as some preservation of the greater good, without falling victim to mass psychosis? Without mass psychosis, why are people so willing to surrender their freedoms, submit to vaccine passports, and welcome a totalitarian police state with open arms?

This behavior is not “normal.” Those under mass psychosis have simply formed a bond so strong that actual facts no longer matter — for they are now the virtuous ones. Anyone who doesn’t constantly virtue signal to the collective is an enemy. Through fact checkers, social media, and big tech control, this collective focusses their rage and hatred on those who have not fallen victim to the spell.

Those not under the spell are evil, need to be locked up, arrested, and are deemed domestic terrorists by the collective.

Critical thought, logic, and reason rest in their graves as mass psychosis maintains its grip on millions of fearful, anxious, and aggressive loners who have found their place in the virtuous and caring aggregate horde.

While this outlook may seem bleak, the good news is that we can fight this mass psychosis by continuing to counter the narrative which is driving it, thereby shaking others out of their hypnosis by repeatedly exposing them to actual reality.

What’s more, it means these horrific things that many people are saying online, like the unvaccinated should be excluded from society or locked up, isn’t necessarily coming from a place of evil, but it’s more of a psychological process their minds are doing to help them survive their false reality.

Don't forget to like SonsOfLibertyMedia.com on Facebook and Twitter.
The opinions expressed in each article are the opinions of the author alone and do not necessarily reflect those of SonsOfLibertyMedia.com.
Previous Post:
Despotism Is the New Normal: Looming Threats to Freedom in 2022
Next Post:
2021: The Year of the ‘Jab’ — In More Ways Than One