Consider all these demands in light of the fact that CAIR is an unindicted co-conspirator in a Hamas terror funding case — so named by the Justice Department. CAIR officials have repeatedly refused to denounce Hamas and Hizballah as terrorist groups. Several former CAIR officials have been convicted of various crimes related to jihad terror. CAIR’s cofounder and longtime Board chairman, Omar Ahmad, as well as its chief spokesman, Ibrahim “Honest Ibe” Hooper, have made Islamic supremacist statements about how Islamic law should be imposed in the U.S. (Ahmad denies this, but the original reporter stands by her story.)

Even worse, CAIR chapters frequently distribute pamphlets telling Muslims not to cooperate with law enforcement. CAIR has opposed virtually every anti-terror measure that has been proposed or implemented and has been declared a terror organization by the United Arab Emirates. CAIR’s Hussam Ayloush in 2017 called for the overthrow of the U.S. government. CAIR’s national outreach manager is an open supporter of Hamas.

Note that CAIR’s support of the freedom of speech here is stated only in connection to protesting Israel. When it comes to criticism of Islam, CAIR’s commitment to the freedom of speech suddenly weakens. Its demand for the removal of “alt-right and Islamophobic online resources” is essentially a call for the removal of material that speaks honestly about the motivating ideology behind jihad terrorism. All such material was removed years ago, so it’s unclear what Ibrahim “Honest Ibe” Hooper is in a lather about here.

This list of demands also features some of CAIR’s usual victimhood mongering: “Ensure American Muslims and other minorities, like all other Americans, have equal access to the COVID-19 vaccine and federal and state aid available to those impacted by the COVID-19 crisis.” Of course, there is no need for such a demand, as no one anywhere is contemplating denying Muslims or anyone else equal access to the vaccine. The next demand makes the remedy for this alleged discrimination clear: “provide more funding to American Muslim clinics.” Ah yes, no problem is so big that a little jizya won’t solve it. 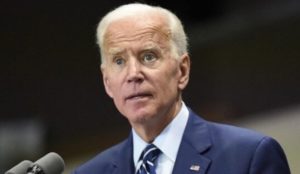 (WASHINGTON, D.C., 12/22/2020) – The Council on American-Islamic Relations (CAIR), the nation’s largest Muslim civil rights and advocacy organization, today publicly released a detailed agenda detailing policy changes that the Biden-Harris administration should pursue within its first 100 days in office to restore the rights of Americans Muslims and advance justice for all.

The report identifies 33 new initiatives and policy reforms designed to protect and respect the rights of all U.S. citizens and residents, including Muslims, that the new administration can start to implement the first day in office.

CAIR’s agenda is being endorsed by the U.S. Council of Muslim Organizations, the largest coalition of several leading national, regional, and local Muslim organizations and institutions harnessing the collective strength of American Muslims for the greater good of all….

1. Fundamentally reform the federal government’s unconstitutional Terrorist Screening Database (TSDB), commonly referred to as the “terrorism watchlist.”
2. Dismantle the TSA’s secretive Quiet Skies passenger tracking program, its international counterpart Silent Partner and other rules-based lists, that operate without Congressional oversight to single out law-abiding Muslim travelers for official harassment and extrajudicial consequences without due process.
3. Oppose and defund the U.S. Department of Homeland Security’s (“DHS”) 2020 “Targeted Violence and Terrorism Prevention” (“TVTP”) grant program, the successor of DHS’s previous Countering Violent Extremism (“CVE”) grant program.
4. End the FBI’s use of informants to spy on American Muslim communities.
5. Reject any new domestic terrorism statutes.
6. Close the U.S. military prison at Guantanamo Bay, Cuba and ensure those detainees already cleared for release are repatriated, and those that remain in U.S. custody are provided due process and a day in court.

10. Work with Congress to repeal the Visa Waiver Program (VWP) Improvement and Terrorist Travel Prevention Act of 2015, re-evaluate all countries currently designated by the federal government under the VWP, and end all other discriminatory anti-Muslim “extreme vetting programs.”…

17. Support the free speech of all Americans and the right to boycott without government interference.

21. Ensure American Muslims and other minorities, like all other Americans, have equal access to the COVID-19 vaccine and federal and state aid available to those impacted by the COVID-19 crisis.
22. Request the U.S. Department of Health & Human Services (HHS) provide more funding to American Muslim clinics….

25. Overhaul existing vetting practices that rely on Alt-Right and Islamophobic online resources on American Muslims and remove additional roadblocks in security clearances for Muslim candidates for positions in government….

Don't forget to like SonsOfLibertyMedia.com on Facebook and Twitter.
The opinions expressed in each article are the opinions of the author alone and do not necessarily reflect those of SonsOfLibertyMedia.com.
Previous Post:
Obama-Appointed Judge Hopes Biden Saves Monster Who Cut Open a Pregnant Woman and Stole Her Baby
Next Post:
Major Victory: What Happens When Americans Fight The Good Fight Of Faith Against Tyranny? They Win! Here Is Another Example