Hezbollah is Still Smuggling Cocaine & Terrorists Across The US Southern Border

Through June CBP had seized a reported 39,995 pounds of cocaine from smugglers trying to get it across our Southern Border.

Protecting our Southern Border is about way more than keeping out “harmless” illegal aliens from poor countries.

Are you aware that Hezbollah smuggles, not just terrorists but also, cocaine across our Southern Border?

This makes Trump’s Iran decisions very important, no matter what his many opponents say.

Because Iranian terrorists are already here!

So How Did We Get Here?

Jack Hellner of The American Thinker has some background:

In 2016, President Obama dictatorially stopped an eight-year investigation into a billion-dollar-per-year drug-running operation by the terrorist Hezb’allah organization to appease Iran because Obama thought an Iran deal would enhance his legacy.

The secret backstory of how Obama let Hezbollah off the hook

In its determination to secure a nuclear deal with Iran, the Obama administration derailed an ambitious law enforcement campaign targeting drug trafficking by the Iranian-backed terrorist group Hezbollah, even as it was funneling cocaine into the United States, according to a POLITICO investigation.

The campaign, dubbed Project Cassandra, was launched in 2008 after the Drug Enforcement Administration amassed evidence that Hezbollah had transformed itself from a Middle East-focused military and political organization into an international crime syndicate that some investigators believed was collecting $1 billion a year from drug and weapons trafficking, money laundering and other criminal activities.

How does it make you feel that Obama let drugs come freely across our border to appease Iran?

Obama was just protecting his supply.

Unfortunately, there may be more truth to that than we would like.

Project Cassandra, launched in 2008, was one of the most successful counter-terrorism efforts in U.S. history. The project was aimed at undercutting the funding for Hezbollah which had refocused efforts on drug trafficking and organized crime to fuel its terrorist empire.

Here is a quick overview of Project Cassandra from Wikipedia:

Project Cassandra is an effort led by the United States Drug Enforcement Administration (DEA) to undercut Hezbollah funding from illicit drug sources.[1] Launched in 2008, the project was said to be investigating the terrorist organization’s funding.[2] According to the DEA, Hezbollah has become increasingly involved with drug trafficking and organized crime as a method of funding its activities.[3][4] The investigation was tracking how large sums of money were being laundered from the Americas, through Africa, and to Lebanon into Hezbollah’s coffers.

In the midst of the now-infamous Iran deal The Obama Administration began placing roadblocks to derail Project Cassandra and would eventually bring it to a screeching halt.

In an article calling for the revival of Project Cassandra, The Hill reported in December:

Until this week, few Americans knew of Project Cassandra, a decade-long operation run by the Drug Enforcement Administration (DEA) through its Special Operations Division. Yet it was one of America’s most successful counter-terrorist campaigns, racking up numerous victories in the war against Hezbollah, the Lebanese terror organization, and its global crime and drug trafficking networks.

A bombshell investigation published on Sunday by Politico’s Josh Meyer has now revealed that, for the sake of achieving a nuclear deal with Iran, the Obama administration derailed the DEA’s program to combat Hezbollah’s growing collusion with drug cartels, letting this nascent threat become a global menace.

The Trump administration should move swiftly to revive Project Cassandra and make it the centerpiece of a comprehensive effort to take down Hezbollah.

The Justice Department declined requests by Project Cassandra and other authorities to file criminal charges against major players such as Hezbollah’s high-profile envoy to Iran, a Lebanese bank that allegedly laundered billions in alleged drug profits, and a central player in a U.S.-based cell of the Iranian paramilitary Quds force. And the State Department rejected requests to lure high-value targets to countries where they could be arrested.

“This was a policy decision, it was a systematic decision,” said David Asher who helped establish and oversee Project Cassandra as a Defense Department illicit finance analyst. “They serially ripped apart this entire effort that was very well supported and resourced, and it was done from the top down.”

When Obama entered office in 2009, he promised to improve relations with Iran and the Muslim world as a whole.

Obama’s CIA director John Brennan penned his thoughts in a policy paper, “the next president has the opportunity to set a new course for relations between the two countries” through not only a direct dialogue, but “greater assimilation of Hezbollah into Lebanon’s political system.”

Seems the two men were on the same page in dealing with Hezbollah.

Newsweek reports that, during the Obama years, thousands of tons of cocaine were brought into the United States, courtesy of Hezbollah, through Venezuela alone:

Project Cassandra, a campaign launched by the Drug Enforcement Administration in 2008, found that the Iran-backed military and political organization collected $1 billion a year from money laundering, criminal activities, and drug and weapons trade, according to Politico. Over the following eight years, the agency found that Hezbollah was involved in cocaine shipments from Latin America to West Africa, as well as through Venezuela and Mexico to the United States.

The Obama administration halted Project Cassandra as it was approaching the upper echelons of Hezbollah’s conspiracy in order to seal a nuclear deal with Iran, even though Hezbollah was still funneling cocaine into America. Officials at the U.S. Justice and Treasury departments delayed the project’s requests to conduct relevant investigations, prosecutions and arrests. Obama eventually helped strike the Iran deal with several other nations in 2015.

Because of the project’s sudden end, it is hard to determine how much cocaine has come into the U.S. from Hezbollah-affiliated networks. But through Venezuela alone, Hezbollah sent thousands of tons to the United States in a matter of years.

When Trump took office the Iran deal became history and now the violent rhetoric between the two nations continues to escalate.

On Wednesday it was reported that Iran has rejected President Trump’s offer to meet about the current situation and hostilities.

Senior Iranian officials have rejected US President Donald Trump’s offer of talks without preconditions as worthless and “a humiliation” after he acted to reimpose sanctions on Tehran following his withdrawal from a landmark nuclear deal. (Source)

As we continue to inch closer to a possible conflict with Iran it is important to understand the backstory of how we got to this point.

While President Trump seems very unwilling to bend to the Iranian regime, those of us old enough to remember the Iran Hostage crisis are hoping that a strong-willed Republican saves the day again. We are hoping that Trump can clean up the mess of Obama much as Reagan cleaned up Carter’s mess.

Obama, in his absolute obsession to achieve a deal with Iran broke that long-standing rule of American Presidents: We don’t negotiate with terrorists. 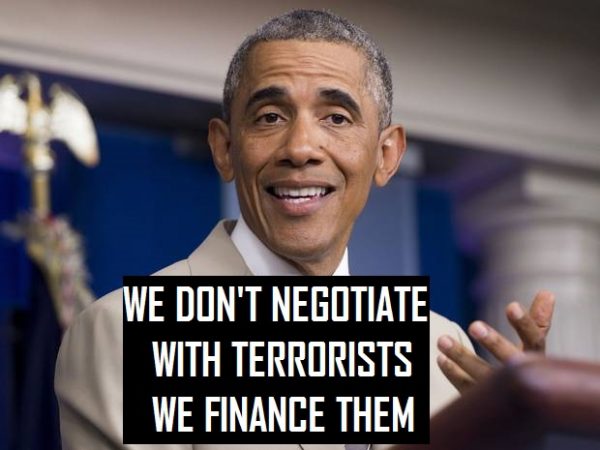 It’s not the first time.

Recently a story broke that in 2014 American Tax dollars were funneled to Al Qaeda.

It was also recently reported that missile casings used by terrorists in Syria ALL came from US bases.

The Obama years changed the way America does business with terrorists.

At what price in American lives do “thousands of tons” of cocaine come?

Is it acceptable for The Obama Administration to look the other way and allow the drug smuggling and terrorist financing to continue, all in the pursuit of an Iranian Nuke Deal?

We must build the wall.

There is no other option.

It’s not just welfare seekers crossing the border (which is bad enough).

And though he did not cross our Southern Border, an illegal that made it here from Kenya may go down as the biggest serial killer in WORLD history.

Anyone that seeks to leave that border open is either naive or intent on destroying America.

Yes, the Democrats are intent on destroying America.

Don't forget to like SonsOfLibertyMedia.com on Facebook and Twitter.
The opinions expressed in each article are the opinions of the author alone and do not necessarily reflect those of SonsOfLibertyMedia.com.
Previous Post:
When the Media Embraces A Talent-less Know-Nothing Has-Been
Next Post:
Ilhan Omar Goes On Live TV Disrespects The Entire Nation… Again