If You Want To Know Why You Shouldn’t Trust Self-Appointed, Bought-And-Paid-For “Fact Checkers,” Check Out The Letter The Sons Of Liberty’s Attorney Just Fired Off To NewsGuard

Self-appointed, bought-and-paid-for “fact checkers have been attacking The Sons of Liberty’s media site for years now.  The latest to do so with absolutely no regard for any kind of integrity is NewsGuard, whose CEO partnered with none other than George Soros years ago, which should tell you who the man runs with and what agenda he is pushing forward.  Nevertheless, on Saturday, The Sons of Liberty’s attorney, Don Brown, fired off a letter to put them on notice regarding the lies, deceit and misrepresentations they put out as fact to the small number of people that pay for their “services.”

Chief counsel Don Brown of Brown & Associates addressed the letter to General Counsel Cynthia Brill, Co-CEO Steven Brill, and Co-CEO Gordon Crovitz informing them regarding their “defamatory statements” published by NewsGuard and their “reckless disregard of the truth.”

Brown was not going to address every falsehood put out by NewsGuard, specifically John Gregory, who has been invited on The Sons of Liberty radio show to account for the lies that he and NewsGuard have put out on SonsOfLibertyMedia.com.  He and NewsGuard, self-appointed and bought-and-paid-for “fact checkers” seem to be not so transparent when it comes to actual confrontation of their lies they peddle.

Still, Brown did touch upon several “prominent examples of falsehood and deceptive innuendo spewed forth by” NewsGuard.

NewsGuard has libelously attacked The Sons of Liberty by claiming that we have “repeatedly published false information, including about the COVID-19 Pandemic and the 2020 U.S. Presidential election.”

“Yet, you fail to show what, specifically, is false,” Brown wrote.

The second item attorney Brown is very familiar with as he was heavily involved in the election process.  I have even interviewed him about what he discovered.

Here is some of the information Brown used to point out just how far from the truth NewsGuard actually is concerning our reports.

Your libelous attack is wholly void of legitimate issues concerning the election that thousands of Americans have raised, only to have their voices suppressed. For example, you fail to address massive vote switches shown on television on election night, right in front of the eyes of millions of Americans, such as the infamous “30,000 vote switch” in Pennsylvania that has yet to be meaningfully addressed, a screenshot which is pasted below. 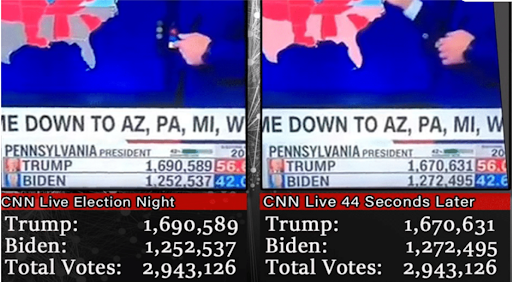 Your attack against SonsOfLiberty also fails to address data, directly from the New York Times showing votes which appear to be systematically siphoned from Trump. Please see below: 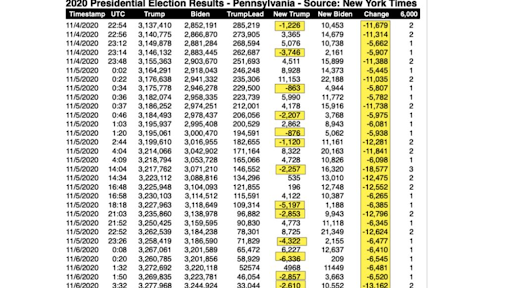 You fail to cite real, significant issues such as the federal case of Curling v. Raffslesberger, brought against the Georgia Secretary of State, involving the vulnerabilities of the Dominion Voting system, in which Obama appointee, Hon. Amy Totenberg, found, among other things, that “These risks are neither hypothetical nor remote under the current circumstances. The insularity of the Defendants’ and Dominion’s stance here in the evaluation and management of the security and vulnerability of the BMD system does not benefit the public or citizens’ confident exercise of the franchise. https://casetext.com/case/curling-v-raffensperger-3

Certainly you must be aware that not only did Rachel Maddow of MSNBC initially support this lawsuit, raising concerns over the security of the Dominion Systems, but so did the Atlanta Journal-Constitution, and concerns were raised by liberal members of the Congress such as Elizabeth Warren, Amy Klobuchar, and others.

I’m sure you also know that Judge Totenberg subsequently SEALED this case without credible explanation, which only raises more questions in the eyes of many Americans about the reliability and susceptibility of computerized voting.  And you would falsely attack and continue to lampoon good Americans like my client, who continue to raise a plethora of legitimate, unanswered questions?

You fail to address the issue of unverified dropboxes scattered in major metropolitan areas like Atlanta and other cities, or well over a thousand affidavits raised by witnesses in places like the TGF Center in Detroit and the State Farm Center in Atlanta.

While citing several vague, unidentified sources expressing their opinions on the so-called integrity of the election, you conveniently fail to point out that one court in the United States has addressed many of these election fraud issues on the merits. Dismissals based upon either “standing” or mootness do not address the substance of any of these underlying claims.

You ignore and ultimately fail to address video evidence of unaccounted for ballots being brought into the TFG center in Detroit in the middle of the night, or video of Fulton County election workers pulling crates of ballots hidden under long tables in the middle of the night, and begin counting after Republican election workers have been sent home.

You ignore ballot evidence and unsupported mathematical impossibilities concerning several districts and states where more people voted than are in those areas, or where a ninety-plus percent Biden vote over multiple precincts becomes a statistical impossibility. See, e.g., Fulton County, Georgia, and large swaths of precincts in Philadelphia and Detroit.

Your failure to acknowledge the other side, full of legitimate factual concerns about election integrity, goes on and on.

Brown went on to point out several problems with NewsGuard’s libel against us for our reporting on January 6, 2020 as NewsGuard continues to promote the in-your-face lies of the Mockingbird media.

He also addressed numerous lies and deceptions told by NewsGuard in order to attack SonsOfLibertyMedia.com concerning CONvid-1984 and the deadly, experimental COVID shots that were marketed to the public as “safe and effective” despite the all time high deaths and injuries reported to VAERS, more than any other shot in history in a matter of months.

“Clearly, your eleven-page missive is nothing more than a cherry-picked hit-piece full of defamatory allegations demonstrating a reckless disregard for the truth, meaning that you don’t have vicarious First Amendment Protection against a libel suit for much of what you wrote,” Brown wrote.

“It is evident that your philosophical bent is not the same as my clients,” he added.  “That is fine, and that is your right, but that doesn’t give you a right to employ defamation. ”

Brown then concluded, “You are certainly welcome and free to take up debate on issues for which you disagree.  But when you claim that ‘Sons of Liberty has repeatedly published false information,’ that is an alleged statement of fact, not opinion, and goes far beyond the line by stepping into the quicksand of defamation and quickly tossing journalistic integrity in the trash can.”

You can read NewsGuard’s Nutrition Label and Brown’s letter in full to NewsGuard below.

Don't forget to like SonsOfLibertyMedia.com on Facebook and Twitter.
The opinions expressed in each article are the opinions of the author alone and do not necessarily reflect those of SonsOfLibertyMedia.com.
Previous Post:
NEW Controlled Food System Is Now In Place & They Will Stop At Nothing To Accelerate Their Control (Video)
Next Post:
About That Unconstitutional 2023 $5.8 TRILLION Budget From Congress & The Biden Administration… (Video)